Stealing Ur Feelings By Sonia Shechet Epstein | May 3, 2019

At the Tribeca Film Festival’s Virtual Arcade, I learned that I was a Republican, had an IQ of 1, don’t like pizza, have a good relationship to myself, and make $103,000 a year. Mostly news to me. All of this was gleaned in 8-minutes of simply standing in front of an arcade machine that flashes a succession of seemingly random images, videos, and GIFs. Above the arcade box was a screen with an outline of my eyes, nose, and mouth and every time it detected an expression change, an accompanying running clock of numbers correlated to seven different emotions was affected. Artist Noah Levenson created this installation, called STEALING UR FEELINGS, with funding from the Mozilla Foundation. The arcade is primarily for exhibition; the project with launch online in the coming months, so everyone can discover how companies can use computers to decode people’s emotional states, likes, and dislikes, and use these indicators to profile people. 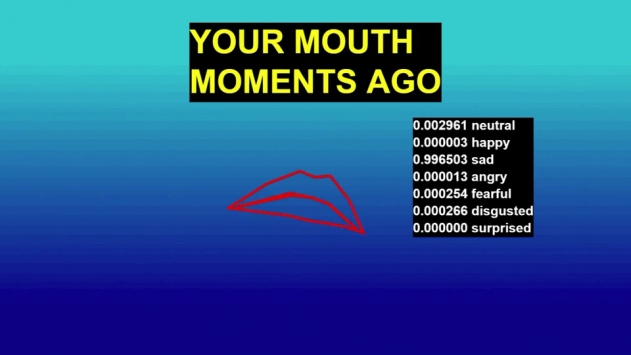 I was a Republican because I smiled at an image of Kanye West, Levenson explained to me at the Festival. In STEALING UR FEELINGS, he uses the same correlative algorithms that some companies use. What if I was smiling at something off screen? What if I smiled out of surprise? What if it was a skeptical smile? What if I associate Kanye with, say, my brother—someone who does make me smile? Companies such as Facebook, Google, Snap, and Apple have or are developing the capability to employ facial recognition and artificial intelligence to draw conclusions about a user. This data can then be used in all sorts of imaginable and likely unimaginable ways—such as determining the content a person sees on anything from shopping websites to dating apps.

Keep an eye out for STEALING UR FEELINGS, which will be released online this year.