Best known for her work as screenwriter on GUARDIANS OF THE GALAXY (2014), Nicole Perlman has now made her own science fiction film, THE SLOWS. THE SLOWS is Perlman’s directorial debut. It is a 20-minute short, which made its New York premiere at the 2018 New York Film Festival. Set in a post-apocalyptic world, the film centers on two women who subscribe to different ways of life. One is “accelerated,” meaning that she has undergone a procedure which has biologically accelerated her past childhood to a fully-formed adult living in a society without suffering. The other, part of the “Slows,” lives off the grid, in a preserve where biological reproduction and development is the norm. Perlman based the film on Gail Hareven’s short story of the same name that was published in The New Yorker in 2009.

Nicole Perlman is a Sloan-supported filmmaker who received a grant through the NYU-Sloan program for her screenplay CHALLENGER, about physicist Richard Feynman, which was subsequently named to the Black List. She has written a number of films that will be released in 2019, including CAPTAIN MARVEL and DETECTIVE PIKACHU. We spoke with Perlman by phone from her home in California in October, after the premiere of THE SLOWS at the New York Film Festival.

Science & Film: From the Q&A after the New York Film Festival, I understood that you used Gail Hareven’s short story as a jumping off point for your film, rather than adapting it closely. Can you talk about why?

Nicole Perlman: Absolutely. When I read the short story I really loved the perspective that it was coming from; it had this kind of alien point of view [in] that things that we all love and take for granted about being alive are not necessarily things that are going to continue to be valued in the future. I really enjoyed the academic way in which the main character was framing his arguments. In the short story [the main character] is a man. I thought at first that I would do a literal adaptation, but when I wrote that first version I felt like gender differences were obscuring the more subtle nuances of the conflicts between the two. I realized I wasn’t really interested in exploring the patriarchy, or the male gaze, which I think we are all very familiar with, but I was much more interested in exploring differences between two women who are approaching a subject from completely opposite perspectives. That was one of the reasons why I changed the gender. One of the reasons I changed the scope of the film was when I showed that first draft to other people in my directing fellowship at Cinereach, one of the notes was, these worlds that they’re coming from are so interesting and rich that we would like to see them so we can fully understand the perspectives, which is key to feeling empathy with the two characters. So that was why I took it from a very simple story between two people in a room and ended up shooting in the rainforest and in a really beautiful modern building in downtown Portland.

S&F: Your background is big budget film, so what challenges did you encounter as a first time director working with a much different budget?

NP: The last time I had been on a movie set had been for GUARDIANS OF THE GALAXY. That was a massive operation with hundreds of people, an enormous village of sets and soundstages, and it was wonderful. But before that, the last time I’d been on a movie set had been during my guerilla filmmaking at NYU film school, so I had the most extreme spectrum of experience and I didn’t know exactly what to expect with my short in terms of what I would be able to accomplish. What was so inspiring was the creativity that comes out of having a limited budget and how that actually makes the world richer in some ways. Rather than saying, this is the future so we’re going to show that by having a levitating train move past the window, I had to get very specific in choices of costume and props.

S&F: One of the things THE SLOWS seems to question is scientific progress. How much progress is too much?

NP: That’s a really good question. I was trying to be a little evenhanded with something that could potentially be a black and white issue; I was trying to give both perspectives validity. As much as the accelerated have become a little less human—by our definition of human—they also saved the world; they regenerated humanity that was going to be wiped out, they solved the environmental problems, and there is no war or suffering. They are in a pretty good place all things considered; they wouldn’t describe [their world] as dystopian—everyone there feels pretty good about themselves and there is even a sense of smugness about how they’ve ended all human suffering and are prioritizing things like art, science, and music, these higher human accomplishments. All of that is something I relate to a lot. I feel like there is something really appealing about that kind of world but I think that the point the Slows are making is that there are things that come with suffering, struggle, and failure. There are things that are less appealing parts of human nature that also make up what it is to be human.

I was really interested in exploring what those less appealing parts of the human experience—like sickness or poverty—what that gives us in terms of our humanity. Each side has a perspective about what it means to live a good life and both sides have a good point.

S&F: Did you choose to tell the film from the perspective of the accelerated because you relate more to those feelings or aspirations?

NP: In the short story, it’s told from that perspective. That was one of the things that drew me to the short story. The accelerated world feels like Berkeley 400 years in the future. I live in the Bay Area, I’m very liberal, very pro-science and there is something that’s really interesting about taking that perspective to its logical conclusion. This is the perspective that I identify more with, even though I’m aware of the importance and value of the Slows.

The hard part was trying to balance the two worlds, because both characters are very appealing. They’re both very certain at the beginning of the short film of who they are and what their role is in their world. By the end, both have a little more understanding about the other side and maybe a little more doubt about their worldview. I didn’t want there to be a huge bolt of lightning that the main characters saves the village and blows up the helicopters [laughs], especially in a short film. It was more about getting cracks in your worldview.

S&F: It is a really rich world that you created in a short film. Do you have fantasies of making it into a feature?

NP: There is definitely a potential for this being a stepping-stone towards a feature. I think there are a lot of stories that could be told within this world, as maybe a prologue to a larger story, But it was really important to me when I was writing and shooting THE SLOWS to not think of it as a proof of concept. I wanted it to feel like its own story and its own world because once you start thinking about it as a proof of concept it stops being a story and starts being a tool. I just wanted it to be a story.

S&F: How do you feel about directing after this experience? Would you like to continue?

NP: I can’t wait. I’m frothing at the mouth to direct again, I’m so excited to get back in the director’s chair. I met wonderful collaborators who I can’t wait to work with again. One of the things that was so fantastic about the Cinereach fellowship was how generous they were with their rolodex—they introduced me to some of the people who I hope to work with as much as possible for the rest of my life, if they’re available. That was absolutely one of the most wonderful parts of the whole experience was the people I met and worked with. Cinereach’s support was really key in making this happen. So yes, I cannot wait to direct again.

S&F: Happy to hear! Do you have your next projects lined up?

NP: I have a whole bunch of projects lined up. I just finished some writing projects: a sci-fi feature for Paramount and a sci-fi pilot for Amazon. Now I’m starting two more narrative features and an initiative to support women in the film industry.

S&F: Sci-fi is a big genre. There is sci-fi like GUARDIANS OF THE GALAXY or CAPTAIN MARVEL and then there’s more subtle, near-future sci-fi. What do you like about science fiction?

NP: I think there is so much that can be encapsulated by science fiction and I’m drawn to movies of varying scales across this genre. I love really grounded science fiction but then I also love fantastical, mind blowing, traveling-to-other-worlds science fiction. One of the reasons [I am drawn to it] is that good science fiction poses questions that are both very relatable and also challenge us on some level. I think science fiction can make us reexamine what we believe about our world and our values in a way that feels safe and comfortable, because if it’s an alien talking about something rather than people we seem to have a more open mind. Even if it’s a space opera that doesn’t have a deeper philosophical meaning, there is something about the idea of imagining worlds other than our own that allows us to feel that our world can change. Our world can be different. I think having that openness of imagination is a very good thing for us and important for any of our endeavors. 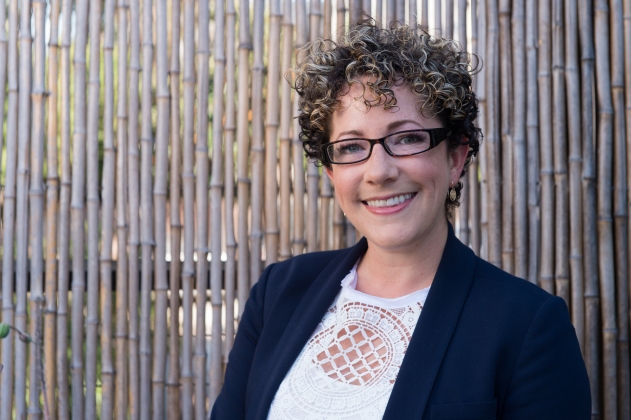 THE SLOWS was written and directed by Nicole Perlman, and stars Annet Mahendru (THE AMERICANS) and Breeda Wool (MR. MERCEDES).