Play About "Father of Modern Gynecology" Premieres in 2019 By Sonia Shechet Epstein | October 16, 2018

Charly Evon Simpson’s new play BEHIND THE SHEET is based on the true story of the so-called “father of modern gynecology,” J. Marion Sims (1813-'83). A monument of Sims was removed by New York City from Central Park in early 2018. Sims invented the speculum and pioneered surgical techniques to perform on women with a vesicovaginal fistula, a painful and debilitating condition that could result from protracted childbirth, but he honed his technique over years by experimenting on enslaved black women. Charly Simpson’s play received a Sloan commission from the Ensemble Studio Theatre, and will be produced at the Ensemble Studio Theatre beginning on January 9, 2019. Colette Robert (MARY’S WEDDING) will direct. The play is currently casting. It is set between 1846 and ’48, and is told from the perspective of Philomena, a 19-year-old black woman who is the doctor’s slave, medical assistant, and victim of his sexual advances.

Charly Evon Simpson’s other plays include JUMP, which will debut at PlayMakers Repertory Company in North Carolina in 2019 before travelling to other cities around the United States. We spoke with Simpson by phone about BEHIND THE SHEET.

Science & Film: I’ve noticed that the phrase “it was of the time” is often used when looking at a historical event from today’s perspective, sometimes as a way of dismissing further conversation about what was problematic. I’m curious how you thought about that in writing this play?

Charly Evon Simpson: One of the things that I find really interesting about looking at history is that we have to hold in our hands the good things that people do and the bad things that people do. We so quickly want to put a person or a thing in one category: good or bad. I’m interested in how we hold both of those things as true. So with this play, that has been something I am thinking a lot about—acknowledging that yes, this play is set in a time when black people were not considered as human, that is just a fact of the play, but also a fact is that there were people at the time who were not in favor of what Dr. Sims was doing and thought that he was going too far. There were people at that time who believed that a black person was not as human a white person but still thought Dr. Sims was not doing the right thing. There were people at the time who were speaking up and saying, this is not of the time, and we know that also because 20 years later there was a civil war.

We all know that slavery was bad—we’ve moved on or whatever people want to say—but it becomes clear that the belief that black people weren’t human led to people believing that black women didn’t feel as much pain, which led to these experiments, which led to a study recently in which they asked medical students whether or not black people feel pain in the same way and there are still people who believe that we don’t! And so that history haunts us. So it’s not actually just in that time, it’s in our time.

S&F: In reading your play, I found that even though Philomena is the main character, you didn’t give the audience too much insight into her thoughts. How did you decide to tell the play from her perspective, and how did you craft her character?

CS: What attracted me to this story and history is that fact that in the real history there are three women that we know of by name who underwent these surgeries: Anarcha, Lucy, and Betsey. I know it’s impossible to get their voices on stage but it was important to me that I attempted in some way. I could not speak for them, so the work was to create different characters based on them in an attempt to explore what they may have been thinking and feeling. That was my entryway; I was interested in voicing that experience in a way that would feel true. I also was interested in complicating the history with other things that we know about slavery: that owners often did have relationships with slaves, and that a woman’s body in multiple ways was under watch, under assault, under abuse. Questions of consent are in the play from a medical perspective but also come up in the relationship that she’s forced into. I was interested in writing a woman who had a little more access and maybe more understanding of what was happening, which allows us to see the doctor in different faces. That was how Philomena came to be. 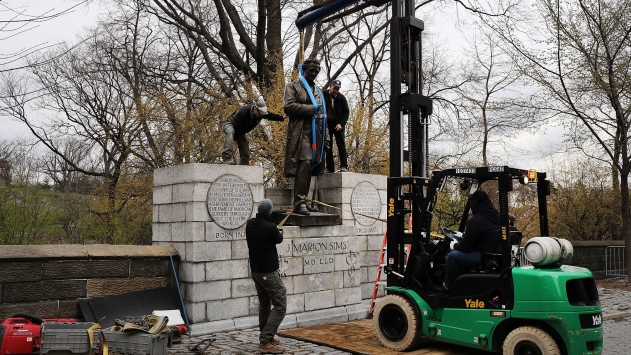 S&F: How did you first learn about this history?

CS: There was an article around four years ago about people protesting at the Central Park statue of J. Marion Sims. We’re still talking about statues across the country but we were really talking about statues then. I happened to read the article, as one does, and then went down the Google rabbit hole and read all about J. Marion Sims and the women he experimented on. I thought all of it was fascinating so I tucked it in the back of my head and when it came time to submit a proposal for Sloan I was still thinking about this story.

The statue is so interesting to me because it is the only statue that the city moved; they removed it from outside of Central Park [and moved it] to Greenwood Cemetery earlier this year. They decided to move the statue to where J. Marion Sims is buried and then add information about racism and medicine and gender. The play was already in its third draft at that point. I had the first reading of this play then two days later I got all these emails from people saying, I wouldn’t have known what the news as talking about if I hadn’t gone to your reading. So it’s been interesting for a story that I didn’t think of [often] years ago to come back in a really big way this year.

S&F: How did you go about researching the play?

CS: J. Marion Sims has an autobiography, so I read the parts that are about this section of his life. When I started writing the play I was in grad school so I had access to things like databases. Then, it was getting to be too much. I’m writing a fictional portrayal of this person, so what is the line between what can be fiction and what has to be fact? Eventually, Graeme and Linsay at EST said, stop researching write the play. 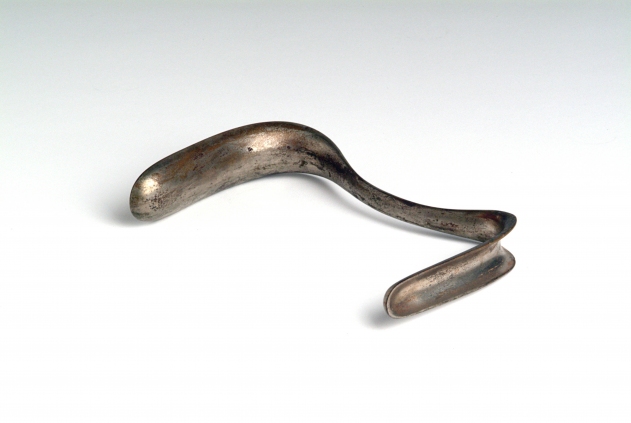 CS: Recently, I was linked up with Dr. Evelynn Hammonds, Professor of African and African American Studies and Chair of the Department of the History of Science at Harvard. I had a great conversation with her. She told me about things like how it was not a time when there were white coats yet, and the space would not be clean. She really helped me fill in what it felt like then, and she gave me a book that helped me understand how the women would have functioned during the four years in which they were being experiment on—what they would have been doing during and outside of the operations.

S&F: Can you think of any example of something that came up in your research that was interesting, but wasn’t necessary for the story?

CS: There is a delicate balance for Sloan. You’re writing about science and you want to be able to talk about that, but I read some journal entries 20 times and there were things I still didn’t understand. I researched the sutures that Dr. Sims was working on making. The women in the play have a little more freedom than maybe they would have had. I acknowledge that, but the focus of the play is about their connection and their experience of this thing, not of slavery per se, not that you can separate the two but it was more important to me that certain things be more historically accurate than others.

S&F: This might be too personal so don’t feel like you have to answer, but I’m wondering how you feel about going to the gynecologist after working on this play?

CS: I will share this with you and I actually don’t mind this being shared. Coincidentally or not, I’m having my own gynecological issues right now and have had several experiences of doctors not listening to me—saying things were normal when they clearly weren’t, or not really paying attention. I’ve had one issue for a year now and I finally went to a doctor again and she really wasn’t listening to me and then she saw a test result and was like, what? And then finally began listening. To be honest, it has made me more aware. There is a history of women not being listened to, and there is a history on top of that of people of color and women of color not being listened to.

During the time that I have been writing this play, there have been a lot of articles about black maternal mortality rates. In New York City, I am around eight times more likely to die in childbirth or after just by being a black woman. I’m a woman, I’m 32, these are all things that I’m thinking about. So it definitely has made me more aware; it’s made me feel like I have to be bossier and that’s okay. I can be pretty meek, but now I’m like, no, I don’t feel right, I’m going to go to 25 doctors until someone listens to me. Sometimes I go to a doctor and think, I’m going to assume you’re not going to listen to me and that you’re going to try to blame certain things as opposed to listening to what I’m saying, and I’m going to try to fight that.

Also, the fact that we’re still using a speculum, which he created! There is so much medical innovation. We can remove gallbladders through the belly button and we’re still using speculums. So in that way I’m like, if this is the history, if these tools were created to look inside not for our comfort because that wasn’t the purpose, no wonder the whole [gynecological] set up is uncomfortable. It makes me really appreciative when I talk with a friend who is a gynecologist, or friends who are doctors because they are people in that field who are interested in making changes.

Many people have been taught that doctors know things. And they do, they know more than me, but you know your body and you know when something feels off and something is not normal, and I think writing BEHIND THE SHEET has just made me be like, I can give consent and I do have autonomy over my body and I really need to use that and respect the fact that I’m in a position where I can speak up and ask questions. That’s what it reminds me all the time. 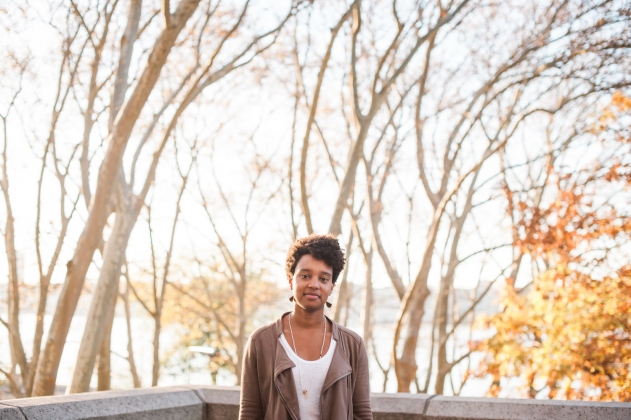 BEHIND THE SHEET is currently casting and will open at the Ensemble Studio Theatre on January 9 and run through February 3, 2019.

Cover image: Protestors in front of the statue of J. Marion Sims in 2017. Credit: Eduardo Munoz/Reuters