Robin Weigert Stars Opposite A Furry In Stella For Star By Sonia Shechet Epstein | September 20, 2018

The new short film STELLA FOR STAR is set at a hotel host to both a scientific conference and a group of furries, fans of animal characters who wear full-body costumes. Emmy-nominated actress Robin Weigert (DEADWOOD, BIG LITTLE LIES) stars as Dr. Marcy Later, who has devoted her life to researching nuclear fusion as a renewable energy solution that could help mitigate the effects of climate change. Directed by Nick Singer, the film just wrapped shooting and is submitting to festivals. It received a 2017 Sloan Production Grant from Columbia University. Science & Film corresponded by Singer by email.

Science & Film: Why did you want to center STELLA FOR STAR on a character who is a proponent of nuclear energy?

Nick Singer: Nuclear fusion, without getting into the weeds too much, is a future technology that proposes to create an artificial star on earth, hold it in an invisible magnetic bottle, and then use it as a power source. If we could figure out how to make and trap this star, it would be the cleanest (no emissions), safest (no possibility of meltdowns), most abundant (runs on seawater) form of energy in the world. In the long term, it could likely solve climate change. It's hard to believe that it's a real thing, but it is. It's sublime, conjuring a star and saving the world. But the tricky part, of course, is that creating an artificial star happens to be unbelievably difficult even though, since the 1940s, scientists have been saying that fusion is right around the corner, we've never been able to get it done. (There's a running joke that "fusion is thirty years away, and always will be.")

That tension was appealing to me: the intensely hopeful promise of fusion—trying to do this incredible, cosmic thing, which would be of tremendous benefit to the planet and to civilization—and then the despondent reality of fusion, which we should have accomplished decades ago but between the scientific, political, and financial obstacles, as well as our general hubris about climate change, we can never seem to realize. At this point, realistically, it may already be too late for fusion, or really any technology, to make a difference in terms of climate change. But we're still trying.

S&F: What sort of research did you do before writing the script?

NS: The jumping off point was a Raffi Khatchadourian piece that appeared in The New Yorker about ITER, which is the world’s premiere nuclear fusion experiment. (There is also a documentary called LET THERE BE LIGHT about ITER and the new generation of fusion projects.) For a while, I thought STELLA FOR STARwas going to be about ITER, and after the project received the Sloan grant—which, truly, the movie wouldn't have happened without; I'm deeply, deeply grateful to Sloan for seeing promise in this idea—I decided to visit ITER on a trip that I had already planned to France.

It was wonderful to see ITER, but the trip solidified that I wasn't specifically interested in ITER. When I got home, my writing partner, Ben, and I started to change a lot of what we had initially thought the film was. It started to have less to do with the financial/political implications of fusion, which our first script was focused on. We spent more time hanging around the fusion lab at Columbia, and went to Washington D.C. to attend the biggest U.S. fusion conference, which became the setting for the film. The conference was a bizarre and really fun experience, in a fancy D.C. hotel. We flew mostly under the radar, but talked to a number of scientists and industry folks who wanted nothing to do with us when we explained why we were there. We tried to tell them that, "No, we're not making a documentary on fusion, but a fiction film about a scientist," but they couldn't comprehend it. People kept referring to us as "the documentarians." 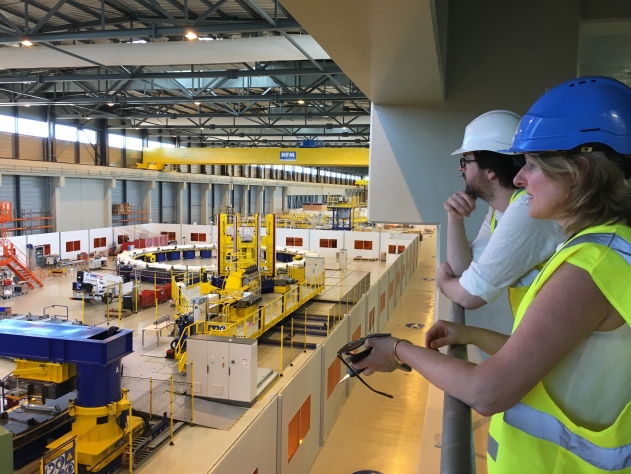 S&F: How was working with a science advisor?

NS: It was fantastic. I'm lucky to go to school at Columbia, which has one of the leading Applied Physics departments in the country and where they have actually built a fusion reactor. Dr. Francesco Volpe, our main advisor, was very helpful to us not only as an educator in the science of fusion, but more importantly as a window into the life of the scientists who work in the field. Most fusion scientists start in their early twenties, usually for both ecological as well as scientific reasons. As Dr. Volpe explained, however, when they get older and start to realize that the dream of fusion within their lifetime is probably not going to happen, a kind of fatalism sets in. The comparison we kept drawing is to the artisans and masons who built cathedrals in the Middle Ages: slow progress towards this thing that you will never see complete, so you just have to have faith that your work isn't for nothing. There's something really absurd and sad and beautiful in that.

S&F: Can you tell me a bit about the production? Where and for how long did you shoot?

NS: We shot for 5 days, right at the beginning of January 2018 in and around New Orleans. My Director of Photography, Justin, lives down there and usually flies up to New York for our shoots. In our early talks about STELLA, Justin wondered, "why not do one down here?" The more I thought about it, the more it made sense: New Orleans is a big conference city, and an obvious symbol for the ravages of climate change. I also really love it there, and thought it might be a nice place to spend some time. Justin's plugged into a network of filmmakers in Nola, so we got the pick of the litter in terms of technical positions, and I was blessed to find Milo and Catherine as producers, who are based there. It was an enormous production, way bigger than any of us had tackled before—we had days with nearly 80 people on set, rain machines, tons of locations, etc.—and while it was certainly tense at times, it went off very smoothly thanks to the producers. At the end of it, I was definitely tired, but also felt like we had assembled this amazing team, and was disappointed that we couldn't keep going.

S&F: How was working with Robin Weigert?

NS: Robin was, and is, wonderful. She is someone I've been aware of for years (DEADWOOD; THE SESSIONS; SYNECHDOCHE, NEW YORK; ANGELS IN AMERICA), and as I was thinking about casting the film, she popped up in BIG LITTLE LIES. If you haven't watched the show, she is exceptionally good as Nicole Kidman's therapist. It's the role of a "professional," and I thought it might translate well to a scientist. It took a couple months to figure out a way to get in touch with her directly, but once I sent her the script, she read it and was immediately intrigued. We met up, and she really understood what Ben and I were trying to do, reflecting it back to us in a way. It was a terrific collaboration.

S&F: What's next for the film?

NS: The film's finished, so we're sending out to festivals now. Wish us luck!

STELLA FOR STAR will be writer/director Nick Singer’s fifth short film. His 2014 feature film OTHER MONTHS played at festivals include SXSW and BAMcinemaFest. STELLA FOR STAR was co-written by Singer and Ben Gottlieb. It was produced by Milo Daemgen and Catherine Rierson. Justin Zweifach was the film’s cinematographer. Stay tuned to Science & Film for more as it goes on to festivals. For more on ITER, read our interview with the directors of the documentary LET THERE BE LIGHT, as well as with ITER’S chief experimental plasma physicist.