[Editor’s note: This article was produced in partnership with Massive where it was originally published. It is part of an ongoing series, “Our Science Heroes,” spotlighting under-appreciated female scientists with illustrations by neuroscientist and cartoonist Matteo Farinella, that will eventually be published as a card deck. Massive is dedicated to helping scientists share stories about their work and lives in pursuit of a more informed, rational, and curious society. It is republished here with permission. Follow Massive on Instagram and Twitter. For more on Rachel Carson, the 2017 Sloan-supported documentary about her is available on VOD and features Mary-Louise Parker reading Carson's letters.]

Since 1782, the bald eagle has been the national symbol for the US. Yet, more than 50 years ago, the species was in danger of extinction: in 1966, only 487 pairs remained. The primary culprit was sneaky–a chemical pesticide called DDT. Sprayed from planes to control mosquitoes, DDT seeped into water bodies, where it worked its way up the food web, through aquatic plants to fish, and then to bald eagles who ate the fish. DDT caused the birds to produce thin eggshells so that the eggs often broke during incubation or didn’t hatch. Thanks to writer and scientist Rachel Carson, bald eagle populations have rebounded.

Known best for her last book, Silent Spring, condemning the overuse of pesticides like DDT, Rachel Carson was an environmental goddess of the 20th century. Her poetic, sometimes sentimental, writing opened readers’ eyes to the wonders of the sea and engaged them in scientific complexities. Her stoic effort and passions for writing and the natural world ushered in an era of environmental awareness and change. She died too soon, at the age of 56, from breast cancer, but her words continue to inspire.

Carson was born in 1907 in Springdale, PA. Growing up on a 65-acre farm near Pittsburgh, she explored the nearby forests and streams with an innate curiosity. Her mother instilled a love of nature, teaching Carson to identify bird songs at a young age, and Carson fell in love with the sea before ever setting eyes on its wide expanse.

Possessing natural writing talent, she published her first story in a children’s magazine, St. Nicholas, at 11 years old. (William Faulkner and F. Scott Fitzgerald both published in this same magazine as children). She earned a scholarship to attend Pennsylvania College for Women (now Chatham University) in Pittsburgh in 1925. Intending to major in English, she switched to biology after a summer fellowship at the Marine Biological Laboratory in Woods Hole, MA. Carson graduated with honors in 1929 and continued on to receive a master’s degree in zoology from Johns Hopkins University in 1932.

The depression hit her family hard: Her ailing father, mother, sister, and two young nieces moved to Baltimore and Carson became the de facto breadwinner for the family while teaching zoology and biology at Johns Hopkins and University of Maryland. She started a doctoral degree but quit in 1934 to obtain a better paying job that could support her family. 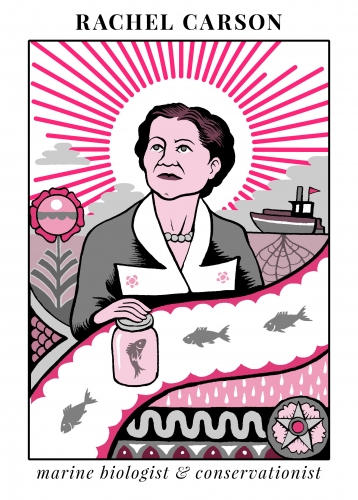 A poet-scientist of the sea
In 1936, she joined the US Bureau of Fisheries (now US Fish and Wildlife Service)—the second woman hired by the bureau at a professional level — to create public-outreach pamphlets and a series of radio programs called “Romance Under the Waters.” During this time, she wrote articles for the Baltimore Sunand The Atlantic to provide extra income for the family. She published her first book, Under the Sea-Wind, a natural history of the ocean, in 1941, the same year the Japanese bombed Pearl Harbor. Carson’s gift for translating scientific ideas into enjoyable prose helped her rise through the agency, becoming editor-in-chief of all Fish and Wildlife Service publications by 1949.

Her second book, The Sea Around Us, appeared in The New Yorker as serialized excerpts in 1951. Exploring the natural history of the ocean for a broad audience, it was later published as a book, winning a National Book Award and remaining on the New YorkTimes bestseller list for 86 weeks. Profits from the second book allowed her to retire from the Fish and Wildlife Service in 1952 to focus on writing.

She purchased a spruce-forested property on top of a rocky bluff on Southport Island, ME, and built a small cottage there in 1953 to spend summers peacefully writing. The success of her books and a Guggenheim Fellowship gave her the financial freedom and time to walk along the shoreline, spend countless hours watching tide pools, and collect shells and small creatures to study back in her cottage. This time in Maine inspired her third book, The Edge of the Sea, published in 1955. Like her earlier books, she delves into the hidden aspects of the sea, the creatures only revealed with an outgoing tide.

Here, by the edge of the sea, she befriended Stanley and Dorothy Freeman, married neighbors. Dorothy Freeman soon filled a niche as Carson’s close friend and soulmate. They maintained a regular, passionate correspondence throughout Carson’s life, though the majority of their letters were destroyed after reading.

Silent Spring and its aftermath
In 1958, Carson received a letter from a friend reporting massive bird deaths after planes sprayed pesticides to kill mosquitoes. Although she had ruminated on the idea of writing a piece on the destructive effects of the overuse of the pesticide DDT since 1945, this letter prompted her to action. DDT, a common pesticide during the 1950s, had been used during World War II by the military to control the spread of malaria, typhus, and other insect-transmitted diseases. When the war ended, leftover DDT was repurposed for domestic use as a pesticide, without any safety testing.

A proposed article turned into a multiyear book project. Carson worked through the death of her mother in 1959 and a breast cancer recurrence in 1960. She had a radical mastectomy that year.Still, the cancer spread. She kept it a secret between her and Freeman.

Silent Spring first appeared in The New Yorker in three parts in June 1962 and was published in book form by September of that year. In it, Carson laid out information about synthetic chemicals, specifically pesticides like DDT, entering the ecosystem and working their way up the food chain to kill all manner of organisms; DDT had become a biocide rather than its intended insecticide. Carson never called for a total stop on man interfering with nature, simply that we needed to have better control over the pesticides and a better understanding of the effects.

Her book triggered controversy and a backlash from the chemical industry, which spent hundreds of thousands of dollars to try to discredit Carson. Chemical industries and pesticide companies tried to discredit her as a hysterical woman, calling her an alarmist, a “spinster with an affinity for cats,” and her book an “emotional outburst.” She didn’t back down.

“The balance of nature is filled of a series of interrelationships between living things, and between living things and their environment. You can’t just step in with some brute force, change one thing without changing many others,” she said on a one-hour special about the book, which aired on CBS in 1963. Carson wore a wig during the filming because she had lost her hair from cancer. Every scene with Carson showed her sitting as the cancer had spread to her spine and standing was too tiring. The CBS reporter who interviewed Carson, Eric Sevareid, feared Carson would die before the show aired.

Silent Spring reached the attention of President John F. Kennedy, who tasked his Presidential Science Advisory Committee to research the effects of the pesticides. In June 1963, Carson testified before Congress to highlight issues and proposed policy recommendations. Even with a legislative ear, she didn’t call for a total ban on pesticides, but pushed to end mass aerial spraying. Citizens have a right to know what pesticides are sprayed on their property, she argued.

Carson died on April 14, 1964, at her home in Silver Spring, MD. Though she didn’t live to see it, Silent Spring played a crucial role in passing the Clean Air Act (1963), the Clean Water Act, and the Endangered Species Act (both 1972), all of which followed in the wake of the book’s printing. The Environmental Protection Agency, founded in 1970, credits Carson for its creation: “Silent Spring played in the history of environmentalism roughly the same role that Uncle Tom’s Cabin played in the abolitionist movement.” DDT was finally banned in the US in 1972, almost a decade after the book’s publication.

Carson received many awards, including the Presidential Medal of Freedom posthumously in 1980, and she became the first woman to win the Audubon Society’s Audubon Medal. But stepping outside, you will find Carson’s longest-lasting legacy. Listen to the birdsong and frog calls, for without her efforts and courage in 1962, our world would be a quieter place.