BUMP is a new play about pregnancy written by Chiara Atik, author of Modern Dating: A Field Guide, and the play WOMEN, a mash-up of GIRLS and Little Women. Atik received Sloan support for the writing of BUMP as part of the Foundation’s 20-year partnership with the Ensemble Studio Theatre, one of the premiere developmental theaters off-Broadway. BUMP follows three stories of expectant mothers, and one soon-to-be grandfather who invents a device he thinks will help deliver babies. In reality, this device is called the Odon Device, which is a device for assisting delivery comprised of a plastic sleeve that is inflated around a baby’s head in the birth canal that then helps the baby emerge. It was developed in 2005 by a garage mechanic named Jorge Odon who got the idea from watching a YouTube video about extracting a cork from a wine bottle. The device is still being tested.

Science & Film: Was there anything about the way that pregnancy is typically talked about that you were reacting to when writing this play?

Chiara Atik: Yes. I started working with the thesis: there’s no wrong way to give birth. It is something people have wildly different opinions on and I wanted to present a variety of experiences in a non-judgmental way. There is a character in the play who wants to give birth completely naturally, there’s a character who has an epidural, and there is a character who has had a C-section. Some women in the play love being pregnant, some find it more difficult than they expected, and some are grappling with new identities as a mother and a pregnant women. I think it is something that as an experience is both universal and isolating, from what I understand.

S&F: In addition to being about pregnancy, the play is also about invention. How did you come to that story?

CA: It was based on a New York Times article by Donald McNeil about Jorge Odon, a car mechanic who invented this Odon Device. I think what really appealed to me about the story was that somebody completely out of the world of pregnancy, maternity, and obstetrics had this crazy insight into it. I thought it was both interesting on a somatic level and had potential for comedy. So that’s why I submitted my initial proposal for the EST-Sloan program.

S&F: Can you walk me through the development process?

CA: I submitted a proposal for this play in 2015 and got the Sloan grant. Then, I think probably almost a year went by until I started actually writing it; I did a very rough first draft in the early summer of 2016. From there worked on it pretty consistently over the last two years with various workshops, residencies, and readings. We started rehearsals in April.

S&F: Did you have any help with the scientific aspect of the play?

CA: I did speak to Dr. Mario Merialdi of the World Health Organization, who Ensemble Studio Theatre put me in touch with. He was the person who Jorge Odon brought his device to and first got excited about it and proved it [could work], and then set it on its course for its journey. He is still working with the device now. So, it was super interesting to hear him talk about his real life journey with it.

S&F: Did you ever think about getting in touch with Jorge Odon himself?

CA: We did attempt a few times. But it’s kind of a tricky thing because I wanted to fictionalize these characters. My character [who was inspired by Odon] has a daughter, and this is really a story about a father and a daughter, rather than a straight biography. The author of The New York Times piece, Donald McNeil, actually came to the play the other night, which was really cool. 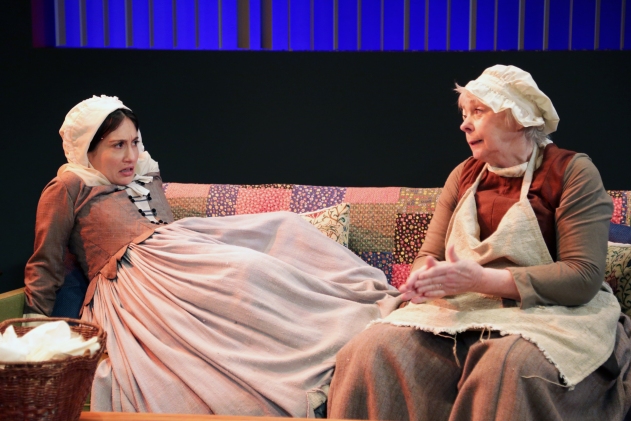 S&F: That’s very cool. Did you get to talk with him, what did he have to say?

CA: Yeah, we spoke briefly after. I think it was a trip for him, probably not something that happens every day that he gets the opportunity to see a fictionalized version of one of his articles. But it was great to meet him because from what I understand that article was instrumental in launching the device. It really got a lot of people excited about it. Dr. Merialdi credited that article with getting their story right and being great press for them.

S&F: Do you care about whether or not the play will act similarly, is that something you have thought about?

CA: I would love for it to. I’m a huge fan of the device, I think it’s the coolest thing. Obviously, cool enough for me wanting to dedicate three years of my life writing about it. I definitely feel like if I were pregnant I would want to use that device. I’d be happy for the play to have any sort of positive influence, but I’m sure the device does not need it. I think it’s going to be a hit no matter what.

S&F: The way people interact with the Internet seemed to come up a lot in BUMP.

CA: Yes, the Internet was important to the story at many levels. I think that pregnancy is so linked to Googling, looking up stories on the Internet, finding message boards, asking am I allowed to eat that? Also, in terms of the real life story, Jorge Odon made this life-saving device from seeing a YouTube video; it’s like divine inspiration almost, that wouldn’t have happened without the Internet. And then of course there’s the third story in the play [set in colonial times], which is meant to highlight what it was like before you could look up answers and talk to other people.

S&F: I really felt how scary it could be at the end when Mary, the woman in colonial times, is pleading with the midwife saying, “I find it highly disreputable of you to leave a defenseless baby alone with somebody who doesn’t know how to take care of him!” Maybe it’s less scary now because you can Google things.

CA: Totally. But I talked to some people, like the director of this play [Claudia Weill] who has two grown kids, who said that in some ways it was less scary [when you couldn’t Google everything]. You would just deal with things and do the best you could and fumble your way through. I was babysitting a friend’s kid who had the hiccups so I frantically Googled baby has hiccups. I’ve been a babysitter my whole life. When I was 15 and a baby had hiccups I wouldn’t have Googled it, I would have just been like okay, I hope this is okay. And it always is okay. Sometimes the Internet can just drive you crazy, can make you second-guess everything. And the truth is, mothers and babies have been fine for millennia, which is just to say, obviously, there’s tremendous good and also the Internet can drive you crazy.

S&F: Yeah. I think everyone has a story about WebMD. For the hypochondriacs among us, it’s really horrible.

S&F: In terms of writing a play that is science based, was this a first for you?

CA: It was a first. And I definitely embarked on it because I knew of the Sloan Foundation’s partnership with EST and I’d seen friends work with them. It’s a very, very appealing program to young playwrights. It was my first commission, which was a big deal—it’s very exciting. In terms of writing about science, I think the fun challenge is trying to make it not like an episode of SCHOOLHOUSE ROCK! or something you would watch with a substitute teacher in Biology. To really make it entertaining and have a dramatic arc to make it funny was at the forefront of my mind while writing. I think it’s hard, especially when writing about something like an invention, to dramatize the exact eureka moment, and it’s hard to make interesting the actual arduous steps that are involved in inventing something, refining it, and testing things out. So I sort of skipped around that in the play, and did instead the point of inspiration and jumped ahead to already having the device. Things like that; trying to make it not didactic but still informative, you have to impart a lot of information.

Chiara Atik’s plays, in addition to BUMP, include WOMEN and FIVE TIMES IN ONE NIGHT. Her screenplay FAIRY GODMOTHER was named on the 2016 Blacklist and will be produced by MGM. BUMP, directed by Claudia Weill, stars Gilbert Cruz, Lucy DeVito, Ana Noguiera, and Jonathan Randell Silver. It runs through June 3 at Ensemble Studio Theatre. Following the matinee performance on June 2, Science & Film executive editor Sonia Epstein will be moderating a panel with the playwright, David Milestone from USAID, and medical journalist Brian Johnson.