Award-winning writer, director, and cinematographer John Maringouin’s feature film GHOSTBOX COWBOY places a cowboy with an American dream of success in China. David Zellner (PERSON TO PERSON, KUMIKO THE TREASURE HUNTER) is Jimmy Van Horn, who thinks America is dead and China is his new playground. With his cowboy hat, belt buckle, and Texas accent, Jimmy Van Horn tries to break into the Chinese startup market with an electronic box marketed to communicate with the dead.

GHOSTBOX COWBOY is John Maringouin’s first narrative feature—his other films include BIG RIVER MAN and RUNNING STUMBLED—and it features a mix of actors and non-actors. Some of these are from Shenzhen, China, where much of the action takes place. GHOSTBOX COWBOY made its world premiere at the 2018 Tribeca Film Festival. Science & Film spoke by phone with Maringouin after the premiere.

Science & Film: At the beginning of GHOSTBOX COWBOY, I thought I had walked into the wrong film and that it was a documentary. Then, I started hoping that it was a fiction film because it was so dark.

John Maringouin: That’s funny. I’m surprised at a lot of the reactions saying that it’s really dark because to me it was just a really broad comedy [chuckles].

S&F: Did you have a specific inspiration for the cowboy character?

JM: David [Zellner] was my inspiration. I’m kidding. The character represents something about the kind of new masculinity–a sort of tech, Silicon Valley, inspired by Tim Ferriss’s 4-Hour Workweek version of an American male. I’m from Louisiana and found myself relocated to San Francisco—I moved up here with my wife—and just found myself surrounded by these people. I can’t say there was any one inspiration for the character, I just felt like everywhere I went these people were in restaurants and coffee shops. Downtown San Francisco has been taken over by a tsunami of folks like this.

The idea for the film was just out there in the ether and it decided it wanted me to do it. I get really annoyed by the idea of directorial vision. I think that’s a really old concept. Cinema was something that came about as a need to represent reality, and now that we have a billion representations per minute, the need for a certain kind of narrative is fulfilled instantly all the time. I think cinema demands something more from us. So, that’s what I was attempting with this. 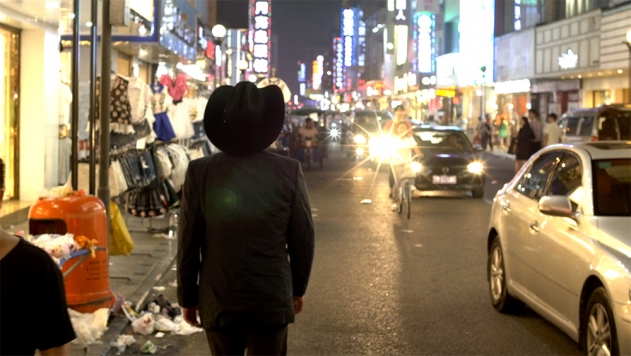 S&F: What about the product that your main character is selling, the “Ghostr” box. Where did that idea come from?

JM: I was attracted by the idea of a product that could be much ado over an awkward plastic box. I had done some jobs shooting commercials for different tech companies so I saw a very dense world behind objects that are not necessarily, in many cases, real. They’re just really vague. The problems they want to fix are even vaguer.

S&F: And then when Jimmy Van Horn goes to pitch the product to the Chinese investors both the product and its goal are pretty hard to understand.

JM: I wanted the audience to arrive to his product in the same way that an audience of investors arrives. They arrive to the product description itself in this absurd mash up of philosophical platitudes about its purpose and its origin. But we’re not treated to the actual origin, inspiration, innovation, or whatever you want to call it of this thing. To me, I just thought that was a really funny point for the audience to come into it.

S&F: This is your first fiction film, did you think ever about making this as a documentary?

JM: I wasn’t so much interested in making it as a documentary as I was interested formally in something that plays with the documentary-fiction line.

S&F: The character Specialist was playing himself, he was a non-actor. Can you tell me how you met him?

JM: Well, I can’t tell you much about what he does because he lives and works in China and it’s very protected. But I can tell you that I knew him for a while and wanted to make a film with him in it. He brings a little bit of his own story to the table, that’s why he’s got a story credit, but the rest is just him appearing in the film almost as a version of himself. But he’s not playing himself per se, he’s acting.

S&F: So you had met him before? Have you spent a lot of time in China?

JM: I had not. In fact, I had spent no time in China. This film idea came up and he just happened to be living there.

S&F: Why did you choose to set it in China?

JM: Well, living where I do, all roads pointed to China. I’m pretty influenced by location.

S&F: There are some very specific locations there that you film, like the mall-style factory building filled with people making different machine parts. How did you find that place?

JM: That was through Specialist and Vincent [Xie]. Both of those characters had connections to lots of factories. It’s incredible what a lot of kids who are second generation manufacturing heirs own. For example, when I was touring one of the factories, I said to the friend of Vincent’s who owned it—and he was about 25, he had inherited it—I said, how many folks work for you? He said, well they work for me, and they live here, and there are about 5,000 people at this location. Ha. You know, that was something I had not seen before.

And also, back to the idea of manufacturing something like the Ghostr box. There is this really absurd circus to put something together. We shot in all the actual places that knockoffs happen. Things like the GoPro and the Fitbit and all these other things that get sourced to different factories that are putting little parts together. These parts come together into this product that you don’t really know what it does. For example, I did a commercial for the Fitbit early on, like the very first one. And I said, what the fuck is this thing? It’s not going to work. And I did the entire commercial: I wrote it, did it, not knowing at all what it did. And it became this huge thing. So anyways, I had seen a bit of this stuff. 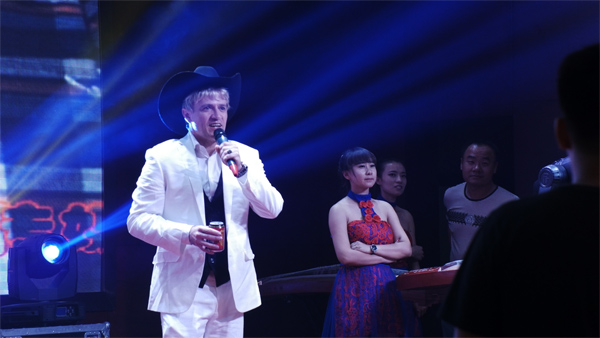 S&F: Yeah, I’ve heard about that but had never seen a location like that filmed. Did the factory people know that you were making a film?

JM: Oh yeah, absolutely. And they were all really into it. I believe GHOSTBOX COWBOY is the first fiction narrative ever shot in Shenzhen, which I find really interesting considering that it’s the place that everything in our lives comes from.

S&F: Has making this film helped you make peace with being in San Francisco?

JM: Not at all. Haha. I’ll never be at peace living here. San Francisco itself is turning into Shenzhen. It’s being converted from a place of historicity and identity to a place that’s industry top to bottom.

S&F: Do you imagine audiences in China or San Francisco­–tech audiences in general–will respond positively to the film?

JM: Oh absolutely. In fact, this movie only exists because so many artists that were being used like stuff by the tech industry were gravitating to this project. Sean Gillane who is the film’s editor and producer is one example. He’s done so many of these jobs and was so inspired by the opportunity to satirize the shit out of it. So that’s really where it came from. It came from an anarchical place.

S&F: Have you been happy with the reception so far?

JM: My favorite review quote was The Hollywood Reporter writing “it’s too outre even for art house audiences.” [laughs] That was the best thing ever. I was like, my god, mission accomplished. Finally. That was the best reward for three years of effort. But it’s interesting how these things happen because if you’d have told me five years ago that I was going to be making a movie in China, Gonzo style, about subterranean tech entrepreneurs, I would have just been like, you’re out of your mind. It’s weird how you just get caught up in these things, like a snowball rolling down a hill that you get caught up in, and next thing you know it’s rolling over you.

S&F: Do you think you’ll go back to China anytime soon?

JM: I’d love to. I’d love to show the film in China. But, you know, the film is not about China. It’s about Americans’ ideas of what China is. The film is a POV film that you experience through Jimmy’s eyes; it’s a very subjective point of view.