Thomas Edison was one of the progenitors of the motion picture industry. He worked on inventions which spanned the full range of the business–a camera, projector, production studio, movie house­–and he was a cameraman and producer. Museum of the Moving Image has two reproductions of his inventions in its permanent collection, and projects a program of his films in the gallery.


In addition to inventing the electric light and phonograph, Edison worked on the first movie camera and projector. In 1888 he wrote a note, which read, “I am experimenting upon an instrument which does for the eye what the phonograph does for the ear.” His invention spooled celluloid on axis to record action frame by frame–Edison’s movie camera was called a kinetograph, a record of movement. In order to project these films for viewing, he built a kinetoscope in 1891. 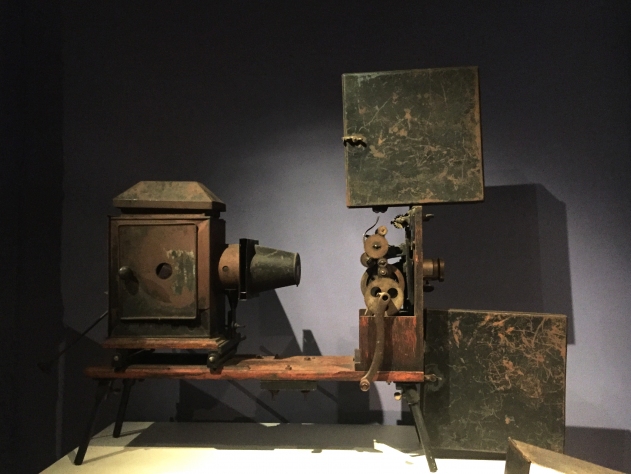 In 1893, Edison opened the first motion picture studio. On the grounds of the Edison Manufacturing Company’s research facility at 72 Lakeside Avenue in West Orange, New Jersey, he built The Black Maria studios. It was a structure built out of wood and covered with black tar. Its shape was reminiscent of a movie camera, and it was set on a track so that it could rotate on an axis to catch different angles of light; it had a roof hatch which opened. By the end of his career, Edison had established three movie studios. He opened his next one eight years after the Black Maria, in 1901, at 41 East 21st street in Manhattan on the top floor of a building so that it could be filled with light. His last studio was in the Bronx. 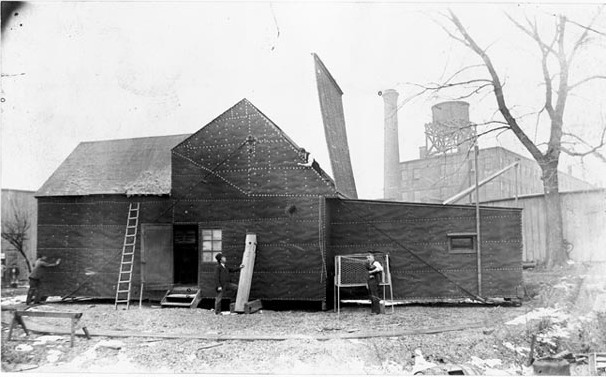 Once he had opened a movie studio, Edison began to produce films. At the Museum, ten films, each running less than a minute, each silent, play in a loop. Each of these films was made in 1894 at the Black Maria. The program includes a woman performing the Serpentine Dance, the same dance Loïe Fuller did for the Lumière Brothers in 1897. Other titles include “Boxing Cats” and “Fred Ott’s Sneeze.”

In order to show these films, in 1893 Edison patented a self-contained machine called a kinetoscope in which a single person could view a film. To distribute his films, Edison opened a Kinetoscope parlor in 1894 on the ground floor of 1155 Broadway between 26 and 27th streets in Manhattan. Ten machines were set in a hall creating a group experience, even if people weren’t seeing the same films at the same time.

A documentary, EDISON, was funded by the Alfred P. Sloan Foundation and made by the American Experience for PBS. It can be viewed in its entirety online, in the comfort of your own home.

A novel by the Sloan-supported, Oscar-winning screenwriter Graham Moore called Last Days of Night features Edison and Tesla as characters and is now being adapted for the screen, as Moore told Science & Film in an interview.

Museum of the Moving Image is located in Astoria, New York next to the Kaufman Astoria Studios, which was built in 1920 for the production of silent films.