Are we nothing more than the stories we tell ourselves? What sounds like a platitude is deeply investigated in Nick Payne’s new play, INCOGNITO. Interweaving three stories, with four actors each playing at least four different characters, the play transitions from one story line to another leading to an emotional crescendo. Bright lights illuminate the white stage, which is bare save for a single prop. Settings change based on the position of four chairs, as well as characters’ accents and mannerisms. The characters in the play are based on true figures from the history of science and medicine; these characters’ stories question the role of memory in determining personhood, and the very notion of a ‘self’.

The three main characters are: the famous amnesiac patient H.M., the pathologist who stole Albert Einstein’s brain, and a neuropsychologist. H.M. is the initials of Henry Molaison, who was a patient in the 1950s living perpetually in the present. To relieve his epilepsy he underwent surgery, which removed a piece of his hippocampus and the surrounding region and had the unintended consequence of robbing him of a long-term memory. His case proved that memory is localized in the brain. The pathologist is Thomas Harvey, who performed Einstein’s autopsy and took his eyes and brain to study. He was convinced that there is something unique about Einstein’s brain. The neuropsychologist in the play also struggles with identity and envies her patients’ ability to forget who they are. The play stars Charlie Cox, of Netflix’s DAREDEVIL series, and Heather Lind, of the play OF GOOD STOCK. Geneva Carr, of the film CREATIVE CONTROL, and Morgan Spector, of the television show BOARDWALK EMPIRE, star alongside. Tony Award-winner Doug Hughes directs. 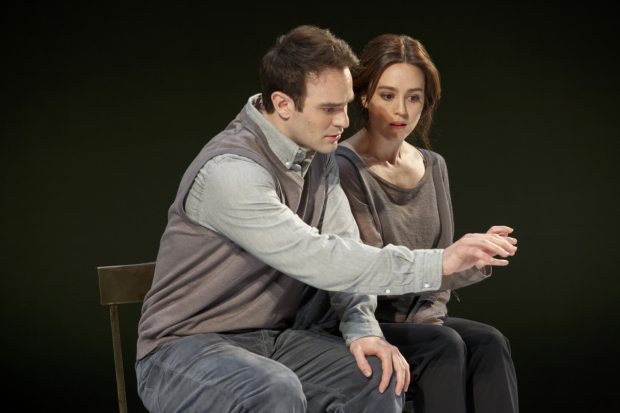 Science & Film attended the May 17 performance of INCOGNITO at City Center, which was followed by a talkback moderated by Radiolab host Robert Krulwich featuring playwright Nick Payne and Mt. Sinai neuroscientist Daniela Schiller. Payne was inspired, according to the playbill, by a number of books including: Into the Silent Land by Paul Broks, Incognito by David Eagleman, Driving Mr. Albert: A Trip Across America with Einstein’s Brain by Michael Paterniti, Forever Today: A Memoir of Love and Amnesia by Deborah Wearing, and Permanent Present Tense by Suzanne Corkin. Watching the play it seems like Payne is trying to make sense of all of these stories, and ask, what do the billions of neurons making up our brain tell us about ourselves? Payne, after reading Broks’ book Into the Silent Land, asked him “what makes me, me? What makes me continuous […] Your book seems to suggest that I’m being duped by my own brain.” Is there a continuous self? Dr. Daniela Schiller said, “Our memories are not as accurate as we think they are. We are always revisiting and reconstructing our memories, and the information that we currently have doesn’t actually depict the events; it is our last version of it.” Of the amnesic patient H.M., she said, “Procedural or motor memory remained intact and could also improve. There was evidence that even his IQ improved. He just couldn’t form new memories.” According to Payne, the play asks “Who are we? What makes us who we are? How are we consciously trying to fool ourselves?”

The production of INCOGNITO is supported by the Sloan Foundation, which has an ongoing partnership with the Manhattan Theatre Club to develop and commission new plays and support science-themed productions. Nick Payne’s previous Sloan-supported play–CONSTELLATIONS–was about a physicist falling in love with a beekeeper in a multiverse of romantic possibilities, which starred Jake Gyllenhaal and opened on Broadway in 2015 to rave reviews. INCOGNITO opened May 24 off-Broadway at Manhattan Theatre Club’s New York City Center Stage 1 theater, and runs through June 26.