Frank Basloe’s new play Please Continue, ten-years in the making, just premiered at the Ensemble Studio Theatre in New York. Based on the true story of the famed psychologist Stanley Milgram, Please Continue tells of the obedience experiments that took place at Yale University in the 1960s. Milgram’s experiment set the stage for an “Experimenter,” a “Learner,” and a “Teacher,” where the “Experimenter” pushed the “Teacher” to punish the “Learner” who screams in protest. The play received a commissioning grant from the Ensemble Studio Theatre-Sloan partnership. Science & Film spoke by phone with Basloe.

Science & Film: I’m interested in the research that went into making Please Continue. What did you learn?

Frank Basloe: I started writing the play in 2006—I had just gotten a commission from the Center Theatre in Los Angeles. Stanley Milgram did pilot experiments with a seminar group he taught, and I thought the idea of 21 and 22-year-old kids working on his experiment was really interesting. When I was going through Milgram’s book, Obedience to Authority, there was one guy he thanked in the book who I noticed was Yale Class of 1961 So, I reached out to him and it turned out he had done his senior honors thesis with Milgram. I spent a lot of time talking with him about the mechanics of the experiment and what it was like working with Milgram. He also put me in touch with his roommate who ended up being the “Learner” who does the screaming. I also spent some time talking with Milgram’s research assistant. I talked with his biographer Thomas Blass. I also talked with Howard Leventhal who teaches at Rutgers University who was a friend of Milgram’s at Yale. But the people who informed the play the most were the two students who were doing the experiment. I was less interested in the play being about Milgram than about the effect of Milgram’s experiment on the students who ended up running the experiment for him. 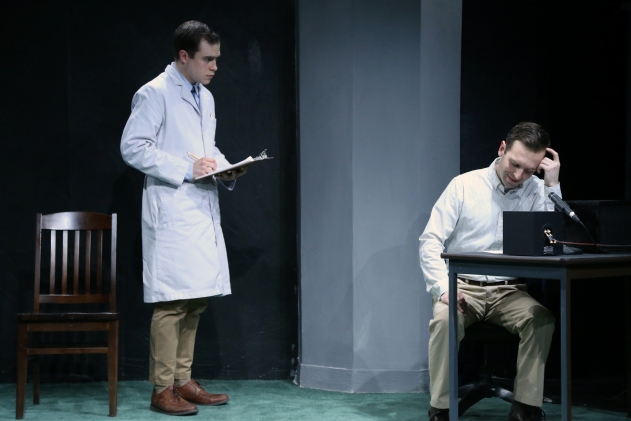 S&F: The people who were involved in the experiments were willing to talk with you?

S&F: Sloan funded the film EXPERIMENTER, by Michael Almereyda, which explored Milgram’s personal life. Why were you drawn to writing about Milgram?

FB: I spent a lot of time in the archives. I feel like I had a grasp of Milgram from talking with the people who work with him. He wrote tons and tons of letters. There was a lot of stuff in the archive—he gets to Yale in the fall and has to fight for parking. The other thing that really grabbed me was that he was a 27-year-old guy who just finished his PhD—the seminal experiment that really made his name he launched into at the age of 27. He’s only a few years older than his students. The prodigious quality of him really grabbed me as well. Dramatically it’s incredible, the setup of his experiment. 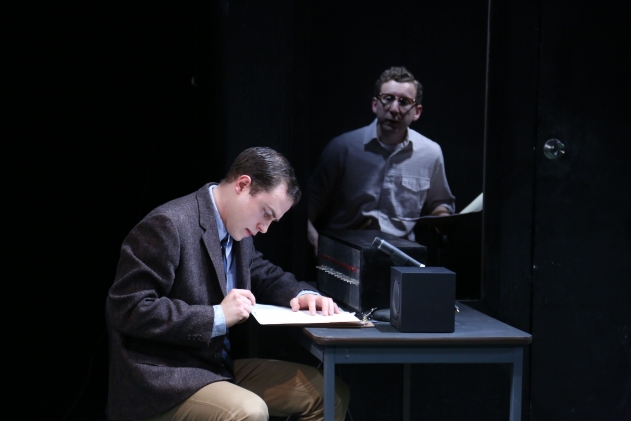 S&F: Have any of the people the play was based on seen it?

FB: They haven’t. I reached out to the guy who had informed it who lives out in Oregon. I did just hear from him—he won’t be seeing the play, but we had a very nice exchange. It’s not him; it’s based on what he went through. It’s hard when people see their lives portrayed on stage. Sadly, a lot of these people are older. One of the people I talked to who knew Milgram passed away a few years ago.

S&F: How did Sloan funds help?

FB: By the time I started working on this with Sloan I was pretty far into the project. I received some rewriting commissions. It was financial and research support. A lot of the work I did was with Billy Carden at Ensemble Studio Theatre who directed the play.

S&F: The play is up until the end of February, do you think it will have a life afterwards?

FB: I don’t know. I think The New York Times came yesterday so it will be interesting to see what they have to say. I do hope it has more of a life. I think universities would be a great place for it given the cast. I would love for that to happen. It’s been a long haul.

FB: I have a couple plays I have been toying with. One deals with a situation related to foster care and another is sort of like THE BIG CHILL with a guy who tried to kill himself but actually hasn’t killed himself.

S&F: Can you see yourself working on other science plays in the future?

FB: Definitely, I really enjoyed it. It’s the first time I’ve ever written a play with real figures in it. It was both enjoyable and a little nerve-wracking.