Fast, Cheap & Out of Control at Museum of the Moving Image By Sonia Shechet Epstein | February 5, 2016

It has been nearly twenty years since documentary filmmaker Errol Morris made FAST, CHEAP & OUT OF CONTROL, which weaves together four narratives of men following their passions who are each interested in the natural world—a naked mole-rat specialist, a topiary gardener, a lion trainer, and a robot scientist. Rodney Brooks, the robot scientist, is based at MIT at the Artificial Intelligence Laboratory—founded by the late acclaimed mathematician and computer scientist Marvin Minsky. Brooks’s drive to build robots came from watching insects walk, and he modeled his six-legged machines after them. The naked mole-rat specialist, Ray Mendez, designed an exhibit in a zoo which included everything about naked mole-rat behavior, from where they like to go to the bathroom to how they regulate–or don’t, as the case may be–their body temperature. The topiary gardener, George Mendoçeno, carves animals. The wildlife trainer, Dave Hoover, trains them.

This beautifully edited film, edited by the late Karen Schmeer, intersperses talking-head interviews and field shots with black and white footage of lion tamer and film star Clyde Beatty. It is a composite of Super 8 videos, 16mm and 35mm footage, stock footage, cartoons, and more. A girl puts her head inside a lion’s mouth. A gardener talk about his beloved shears, and trims a giraffe in the rain. Naked mole-rats pile on top of one another. A robot scientist studies bees; he expects that one day robots will take over for humans. 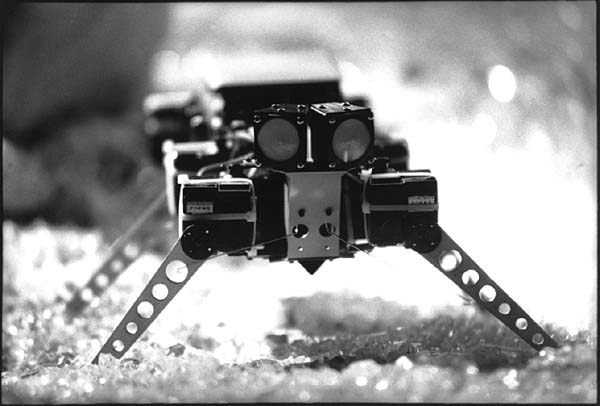 Now, twenty years later, we can see how far science has come. Some of Brooks’s comments are prescient. Other seem outlandish still. Robots have not swarmed on Mars. But Rodney Brooks is founder of Rethink Robotics which created Baxter—an adaptive robot which can take over for humans the repetitive tasks they perform in factories. He is at the forefront of human-computer interactions. Lion tamers still exist. Dave Hoover died in 2006 of natural causes—though bets from the movie were on him being killed by a lion, a fate he narrowly escaped multiple times. Naked mole-rats are still a source of fascination, and have even entered the popular culture in Disney’s TV series KIM POSSIBLE. Topiary gardens still need topiary gardeners, though George Mendoçena of the film died at the age of 101 in 2011. 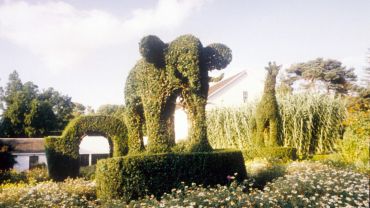 On Valentine’s Day—Sunday, February 14—the Museum of the Moving Image will screen FAST, CHEAP & OUT OF CONTROL in 35mm. The film was Morris’s fifth documentary and won for Best Non-Fiction Film at the New York Film Critics Circle Awards in 1997. The screening is part of the Museum’s ongoing series See it Big! Documentary organized by Michael Koresky and Jeff Reichert of the publication Reverse Shot and the Museum’s Chief Curator David Schwartz and Associate Curator Eric Hynes.