Our year-long edition of Science on Screen focused on the theme “Extinction and Otherwise” will continue this fall with a special screening of the iconic 1973 sci-fi thriller SOYLENT GREEN, set in 2022 New York City, introduced by legendary science educator Bill Nye. The event will take place on September 25.

SOYLENT GREEN, directed by Richard Fleischer, takes place in a city where the population has grown to 40 million and the accompanying climate changes have made every resource scarce. In 2017, we spoke with professor of environmental studies Dr. Andrew Reid Bell about the scarcity of one of those resources: water. That interview is republished below. (Warning: this interview contains some spoilers.)

Science & Film: What were the ideas about climate change when the film was made in 1973?

Andrew Bell: In the mid-1960s through 1970s there were a number of big post-apocalypse movies such as SOYLENT GREEN and SOLARBABIES. These came after [Rachel Carson’s book] Silent Spring, published in 1962,which laid out the linkages from pesticide use in agriculture through to the collapse of predatory bird populations, and which got everybody thinking: what is going to happen to us? The idea of an enhanced greenhouse effect from fossil fuels preexisted the book and the bigger environmental movement that followed, but from what I’ve read, it was in the years after Silent Spring that things really began to move. 1973 was not too long after the founding of the Environmental Protection Agency and the signing of the Clean Air Act, so urban pollution was visible in a way it isn’t now.

AB: We suspect we are going to stabilize the population at ten billion, and some parts of the world will have more than enough to eat and other parts won’t. SOYLENT GREEN shows a New York with 40 million people, which is a degree of growth and crowding that we already see in some parts of the world, like Pakistan’s Karachi, or Mexico City. I know it is a fiction film and from the ’70s, but it is hard to imagine a city with 40 million people where there are only thousands with jobs. Although, you can drive around urban centers in many countries and see a whole world of people standing around with not a lot to do, often having come from rural areas, as part of a rural to urban transition.

S&F: Can you say more about what you mean by rural to urban transition?

AB: Making a living on a small patch of land can be really tough, and it can get harder and harder over time as family farms get divided up. In some areas, families leave to go elsewhere and rural landscapes consolidate so that fewer families farm. For those that stay, the agricultural livelihood can be more resilient because one family can work more land, but it only works when those people who are leaving have something to go to. This is a problem we face now in many parts of the world.

S&F: In SOYLENT GREEN, Gramercy Park is the only area left with a few trees, and there is nothing growing. Is it possible to produce food without soil?

AB: There is a big vertical farm in New Jersey called AeroFarms that uses an artificial substrate, which does some of the job of what soil is supposed to do. From a farming viewpoint, the big job for soil ecosystems is to keep nutrients and water available to the plant; it isn’t anything magical, but—perhaps until these recent artificial substrates—it is something at which soil has been the best. One of the big challenges with agricultural expansion is that the more you grow, the more land is exposed and the higher your erosion rates. Soil takes a long time to form; it grows about an inch every century, but you can wash it away very quickly. So, to the extent we can avoid that through conservation practices in agriculture or finding other ways to grow food, the better off we are.

S&F: Is soil important for other reasons besides growing crops?

AB: Yes, and different experts will point you to different things. One thing I think of is that soil has the ability to absorb water in and slow it down, helping to manage floods and landslides—but that really depends on having plants to hold it together. 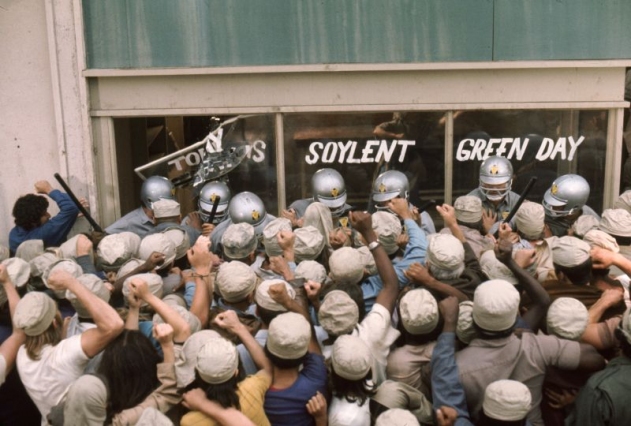 S&F: What about the issue of water in SOYLENT GREEN? With increasing populations, will water shortage become a serious issue?

AB: Water problems are fundamentally a scale problem. We are never going to have no water–we are worried about our annual demands outstripping our annual supply. So long as there is evaporation from lakes and the ocean, we are going to have precipitation and there is going to be water, but the patterns of that are going to change. We’ve learned from the IPCC [United Nations Intergovernmental Panel on Climate Change] reports that we are going to have more extreme weather events. Instead of having them spread across the year we are likely going to have a smaller number of bigger storms. So, there could be a wider physical area without water, or longer droughts. Dams and water diversions are physical or approaches to help us correct some of these problems, but we’re getting better at recognizing the problems they themselves can cause. More and more you’ll hear about soft approaches to water problems that rely on better management across the different groups that rely on water.

S&F: What about food shortage? In the film, Soylent Green is made from people.

AB: This idea of cannibalism as a unique source for food does not work thermodynamically. The only true source of food energy is plants. We call them the primary producers. They’re the only thing that can take sunlight and convert it into stored energy. When we eat animals, we’re really eating the plants they’ve eaten. Roughly speaking, on average about ten percent of the energy that went into one living thing translates into making more of the next living thing up the food chain, but it depends on the creature. Humans are endotherms, warm blooded, and we maintain our body temperature by moving around. We end up spending so much of our energy on maintaining our body temperature that very little energy goes into biomass. We are slow growing, and inefficient from an energy perspective so probably a bad choice for a food supply.

The idea of us eating people who are fed on people and fed on people and so on, it doesn’t make any sense. It solves your overpopulation problem in a pretty short amount of time, because people as calories can support so few people that your population would just start dying off. In SOYLENT GREEN, it is the old people and those who’ve been encouraged to commit suicide who are the food supply. That is going to support so few of these 40 million people that people are going to get weak and die sooner. Really quickly you are back down to ten million people. There was a 2009 movie called THE ROAD with Viggo Mortensen that played with this idea as well, where plant life is extinguished. In two years, that would just wipe out everybody.

S&F: Could plants made from genetically modified organisms (GMOs) have a different nutritional capacity?

AB: Plants can be modified so that they can be pest resistant, or pesticide resistant, or more nutritious. As much as some groups have tried to find evidence that GMOs harm human health over the last 20 to 30 years, they have not been able to. But, though health may not be one of them, there are many reasons to be cautious with GMOs–there’s the ecological concern that we don’t know how genes might spread through ecosystems or otherwise affect them, and then there are the social problems. For example, once all of my neighbors are growing pesticide resistant seeds and spraying them, I don’t really have a choice anymore. In the bigger picture, the scary thing is that we are operating on an unprecedented scale in terms of our influence on the environment around us.