Making its world premiere in the Narrative Competition of the 2022 Tribeca Festival, NEXT EXIT is set in a world that believes in ghosts. Researcher Dr. Stevenson (Karen Gillan) is recruiting volunteers for a study that in which they “pass over” to the ghost realm. The film follows two volunteers, Rose (Katie Parker) and Teddy (Rahul Kohli) who bond on their journey to the clinic. NEXT EXIT is Mali Elfman’s directorial debut. We sat down with her during Tribeca to discuss the film’s portrayal of the supernatural and scientific, her inspiration, and future projects.

Science & Film: I’m curious about the use of screens in your film. I notice we only ever see the scientist on screen, and the film opens with a ghost on screen–why did you use screens in that way?

Mali Elfman: I love having conversations about perspective. That’s a theme throughout the film: how you feel about something can change depending on your perspective. I intentionally start the film from somewhere else, and then I walk us into our reality, and the world that we know. Everybody wanted me to make a horror film, I love horror films, I thought my first film would be a horror film, this was not a horror film. But I wanted to build up that tension. The film is a lot about the things that scare you. If you could recontextualize those, what are they really? Everybody is trying to understand what happens next [after death]. The fact is, we don’t know, and that’s a scary thing. I wanted to take away that element because it’s a weird shift in your psyche—what if you knew? I think certain people, as we’ve seen with COVID, will stand by their beliefs and avoid [the truth]. It was fun for me to explore that and very relevant when COVID first hit, which is when I went back to the script, and watched that ripple effect. It hit in so many surprising ways that I could have never predicted, and it continues to, it has not ceased.

For the doctor, I always felt like she was untouchable. What’s funny is, I’ve written so many scenes in which she appeared in person—we actually shot one for the end of the film. But it felt disingenuous to me, because that’s not how these… honestly, she became my Fauci in a lot of ways. He has become so important to our lives; he’s a daily presence who you look to, who has the information you need but is always untouchable. [In the world of the film], even if you go to participate [in the science study], that doesn’t mean you get access to that person. In fact, there is a giant machine around that person. I felt like leaving Dr. Stevenson as too big to touch was the way I wanted to go.

ME: There is that.

S&F: There is some dialogue in the film questioning whether the study is just a scam.

ME: Is it? The fact is that we know what it is. I could make a Dr. Stevenson film very easily, about the science and what her goals truly are, and what her science is and why she’s doing it. What she needs is data. She needs to see, track, and record people going into the next realm. The more she’s able to do that, the more she’s able to understand what it is she has actually discovered. I don’t think she fully understands her discovery, and the only way to be able to do that is literally putting it through a trial process. You need people to cross over because you have to know what you’re finding. 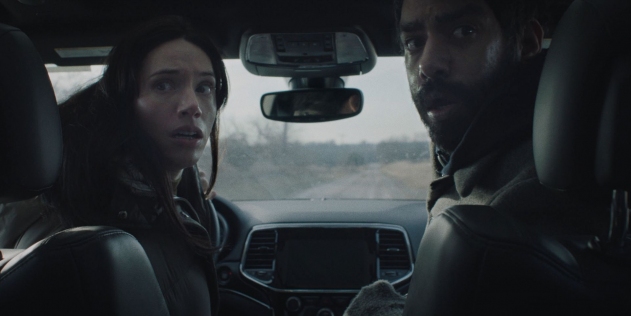 Katie Parker as Rose and Rahul Kohli as Teddy in NEXT EXIT. Photo Courtesy of No Traffic For Ghosts LLC.

S&F: This may be too technical of a question, but if the procedure is still in a trial phase and Dr. Stevenson needs participants, if it’s a double-blind trial, wouldn’t some of the participants not be crossing over and getting the equivalent of a placebo?

ME: Yes. There were about seven pages more explanation in the beginning and end of the film about what’s going on, but when people watched it, nobody cared. That wasn’t what they were there for. At a certain point, it becomes about the characters; it becomes about their emotional journey; it becomes about, what if death is a transition to something else that we can now understand, what does life mean? That was the point of the movie, so I leaned into it. Also, it was 20 minutes too long and I was told to cut it down and I did. And they were absolutely right. I think it’s better to keep that focus.

That being said, I literally built out the world of this science, and I would love to have been able to express and show a little more of it, but I get to make more movies! My team jokes about the Mali Elfman ghost universe, because the next film I’m writing is a ghost story and I get to use a lot of the things I didn’t in this film, and I’m very excited about that. The ideas have not gone away, they have just been moved over.

S&F: In terms of working with the actors, the people who believe they’re living in a place that has more than one realm, how did you ask them to prepare for those roles?

ME: Katie Parker who plays Rose wanted all the backstory and all the science. I started giving it to her then I paused and said, why does your character want to take part in this [study]? What is going on for you in your journey? That is what I want you to focus on. With Rahul I did the same thing. Why do you want to go there? Get there no matter what. And I said that to Katie too. I think her character is running away and he is running towards, so you have that diametrically opposed dynamic. For Dr. Stevenson, Karen Gillan, I did have a very fun conversation where we talked about all of it. She wanted to know the extent of what her character was doing and why. I believe that character is somebody who has had trauma and can’t let go and wants to access the other world so they can solve something internally for themselves, so she would believe it wholeheartedly and need to believe it even when all these people are attacking her. She believes she has solved something many of us go through, which is the pain of loss. So I think there’s real drive to her character. One could argue though that loss happens no matter what, and she’s a little blind sighted by her own creation—but I didn’t tell Karen that because that’s my own perspective and you never tell your actors that. 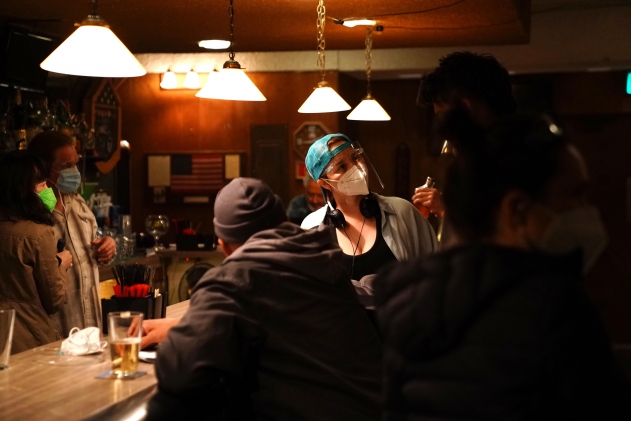 Mali Elfman, writer/director/producer on the set of NEXT EXIT. Photo Courtesy of No Traffic For Ghosts LLC.

ME: I grew up in a house that was known as the Murder House because there was a family who was killed there and there were notoriously ghosts. Families would move in and leave. My mom had just separated from my dad, and we moved into this house, and my mom, sister, and I all had experiences we never spoke about until later in life. I remember this one time where my mom and I were in the TV room and all the animals came running through the hallway; all the animals meant three dogs, two cats, two birds, a guinea pig, a hamster—it was like Ace Ventura but freaky. We went into the living room and right next to where a woman had been killed there were bullet holes on the inside pane of the glass. My mom just looked at it and covered it up and said, don’t tell anybody or they won’t come to the Christmas party. That was my life. So there was this presence around us but it wasn’t like how a lot of horror films represent it. It was like, there’s a presence, but this is going to be a great party, I have caterers coming. It was very much like a practicality for me.

The reason I started writing NEXT EXIT is from going through losses in my life, be it a divorce, or literal losses. I was driving away from a loved one who had just passed away, and it didn’t make sense to me that they were gone. Anybody who’s been there for that… I needed to know. I wanted to make a world where I did. That’s the Dr. Stevenson in me. Then I wondered what would happen. But that’s where this all started.

S&F: Can you say anything about your next project?

ME: There are a couple of different ones. Almost all of them have ghosts! I have two scripts ready, and the script I am writing is the story of the house I grew up in. It goes back into what really happened there, and the story of the woman who lived there before. In terms of directing, there are two films and I really hope I get to make them. And I’m producing another film for Laura Moss that we shoot very soon in New York. NEXT EXIT is just my heart. I get nervous when I’m about to talk about, and then when I think about it, it makes me so calm and happy. I’m so proud of it—please let it have a life and go on.