[Editor’s Note: Alex Garland's thriller ANNIHILATION features a group of scientists, led by a biologist, who venture into an environmental disaster zone that has caused all the organisms in it to mutate. The film, released by Paramount Pictures, stars Natalie Portman, Jennifer Jason Leigh, and Gina Rodriguez. Science & Film asked Harvard-based biological engineers Pamela Silver and Jeffrey Way to write about the film.]

A mysterious meteor has struck at the base of a lighthouse creating a gauzy, slowly expanding field–the ‘Shimmer.’ Thus begins Alex Garland’s film ANNIHILATION. The U.S. Government has sent in teams of armed soldiers to investigate the Shimmer, and only one very damaged soldier has returned. While the previous failed teams have been all male, this time an all-female group of military badasses–most of whom also have advanced degrees in biology or physics–enters the Shimmer.

Inside the Shimmer, the team finds that human-built structures are rapidly decaying, but the biological world has been enhanced. Here the special effects are quite stunning and somehow plausible, because these effects build on the inherent beauty of biology itself. 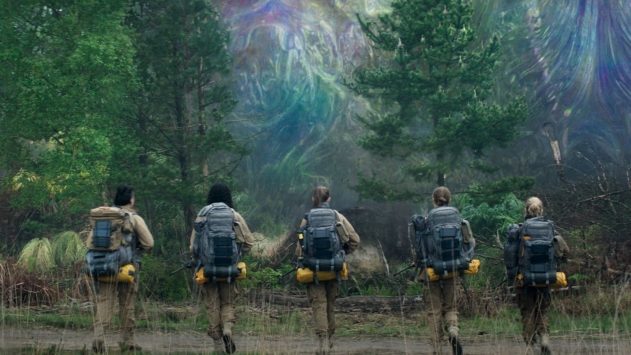 Soon the team runs afoul of predatory animals that are also enhanced. One of the scientists figures out what is going on: the same force that causes scrambling of radio and light signals in and out of the Shimmer is also causing a scrambling of DNA. Hence, the enhanced evolution and hybridization of everything inside the Shimmer.

This scrambling is called horizontal gene transfer, and it occurs in Nature. It is the uptake of DNA from one organism into cells of another. The first organism’s DNA is incorporated into the new organisms’ chromosome and then actually functions, changing the properties of the receiving organism. Horizontal gene transfer is especially prevalent in bacteria, which exchange DNA frequently and which can evolve rapidly as a result. In more complex organisms, horizontal gene transfer would require getting foreign DNA into eggs or sperm cells, and these are highly protected.

In the DNA sequence of the human genome or that of other animals, there are remnants of viruses that may have infected a germ line cell in the past, but no evidence of anything that has been recently transferred from another species. The most profound examples of horizontal gene transfer–the formation of mitochondria and chloroplasts–involved invasion of one cell into another. These examples are incredibly rare, having evidently occurred only a few times during all of evolution on earth.

Thus, scientifically at several levels, ANNIHILATION makes no sense. First, random mixing of DNA from different species doesn’t usually result in viable hybrid organisms (except in bacteria). We can forgive the screenwriters for this, but more problematic is the way that the scientists figure out what is happening. One of them observes a set of bushes growing in human form and simply announces that HOX genes would be found in these plants; HOX genes are the master genes that control the body plan of animals from flies to humans, but not plants. Any self-respecting biologist investigating the Shimmer would carry a hand-held DNA sequencer. These really exist. The biologist would feed a sample into the sequencer, and would then know for sure that there are HOX genes in the plant, as well as all the other human genes that might be present. A complete sequence analysis could be available in a few hours, and this is actually not science fiction. (Also, HOX genes are very last-millenium–we were shocked that CRISPR, a DNA editing technology in wide use and the latest darling of the scientific press, was never mentioned as a means of DNA scrambling.)

Second, real scientists talk to each other. When confronted with new phenomena Ph.D.-level scientists, even when functioning as military commandos, would toss around different hypotheses to explain what they are seeing. Instead, these women simply tromp around silently, guns drawn. This film completely fails to capture the puzzling, the banter, the debate that characterizes scientists in the process of discovery. Much of the film’s dialogue seems to have been inspired by watching other movies about imagined scientists.

ANNIHILATION does have excellent acting, beautiful and terrifying special effects, and dialogue that is relatively devoid of clichés. There is a motivation problem in the plot: why would a handful of highly intelligent women march to likely destruction when they could simply return after making some initial observations and head back to headquarters for a data dump. Much of the film consists of watching the group walking, which allow the special effects to be highlighted, but also the viewer to wonder why they didn’t just turn around. 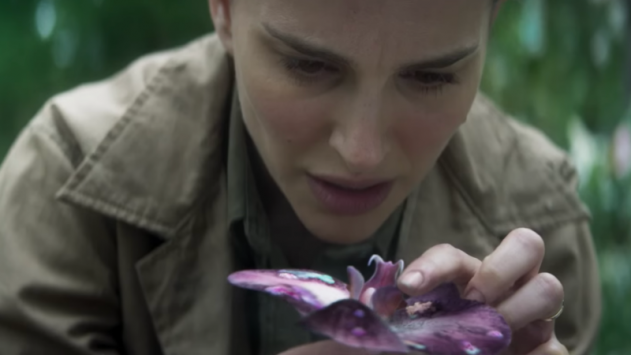 After watching the movie, the next morning we went back to our day jobs: engineering hybrid organisms with DNA from multiple sources. This is hard. Most of what we do requires elaborate designing and planning. A random scramble of DNA to build an organism is likely to be as productive as dumping a pile of brick on the ground and expecting to get a house. Someday, we may create new hybrid organisms of great beauty, but not today.