Interview: A Sloan-supported Virtual Production By Sarah Luciano | May 3, 2022

Set in 40,000 BCE, the Sloan-supported, 15-minute short film THE LION AND THE FIREBIRD (2022) follows a young woman who flees her tribe rather than be forced into an unwanted marriage. A violent warband in hot pursuit, she encounters one of the last living Neanderthals and together they work to communicate and find trust in one another. The project is one of the first low-budget independent films to be shot entirely on a virtual production stage, made possible in part by its receipt of the 2021 Sloan Production Award at Columbia University School of the Arts. The film will make its world premiere at the Columbia University Film Festival in May. We spoke with filmmaker Daniel Byers about finding inspiration in scientific research. Byers’ collaborator Fernando González Ortiz joined us to discuss how the research-led development process necessitated their technically ambitious virtual production.

Science & Film: Can you tell me about the genesis of this project?

Daniel Byers: THE LION AND THE FIREBIRD came out of an interest in paleoarchaeology. It’s this epic action-adventure film set in the Paleolithic era, this very interesting moment in human history when different types of humans cohabited the planet. We had Neanderthals, we had Denisovans, all these other subspecies of humans. It’s sort of a BEAUTY AND THE BEAST story about reaching out across boundaries of language and culture to find a shared humanity.

My background is as a documentary filmmaker and I’ve done many years of work with tribes around the world from Tanzania to Panama so I came into this project with that guiding ethos. This notion of the knuckle-dragging caveman wearing a skin and carrying a club probably never existed. The characters in our world [in the film] live at the cusp of an ice age, what any reasonable person might think would be the apocalypse. I think that’s something people will connect to across time; the need for cooperation in the face of a very difficult world. 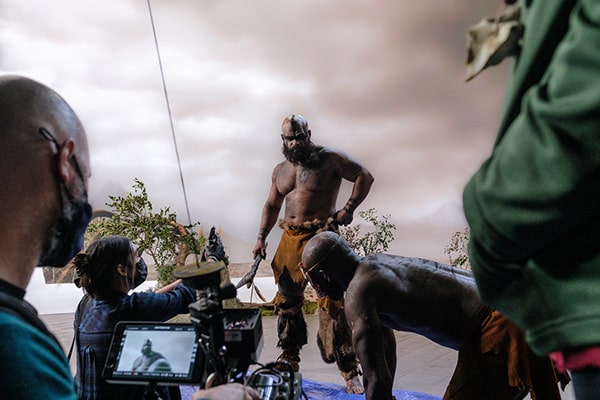 Production still, courtesy of the filmmakers

S&F: Was scientific research a significant influence on the project’s development early on?

DB: It’s based heavily in the research. We worked with Dr. Anna Goldfield, a paleoanthropologist, to create the story and its material world. For example, it’s performed entirely in a proto-Afroasiatic language. It also shows on screen–for the first time–a number of rituals and cultural elements that have only recently been appreciated as being part of our shared material story–things like body adornment, in the forms of different types of paints and glitters that people used back then, jewelry, and burial practices. We’re excited to show all of that, which was one of the things that I first got very interested in: What were the differences between these types of people that far back? Have we maybe misrepresented them and ourselves as being more different than we actually are?

S&F: Given the importance of communication between your lead characters, can you tell me more about how the language you’re using came about?

For the Homo sapiens’ tribe, we wanted to go back as far as we reasonably could to look at the most ancient languages that exist. We don’t know what they sounded like but we have some sense of what the roots might have been going back about 18,000 years. We’re going back more than twice that for our film, so that entered into the more creative territory of using those same techniques to reverse engineer languages, where we can say with some authority, These are probably root words that did exist that far back. Can we take that back another 18,000–20,000 years? What would that language perhaps have sounded like?

When it comes to Neanderthals, [the language we use in the film is] in speculative territory because we don’t have any direct evidence of their language, so we’re looking at the morphology. There has been a lot of computer modeling done on the Neanderthal palate, creating simulations of what they actually sounded like. One of the things we came across was that Neanderthals had very large, barrel-sized chests. That creates a bigger resonance chamber, which means you might have a bassier sound to your voice. 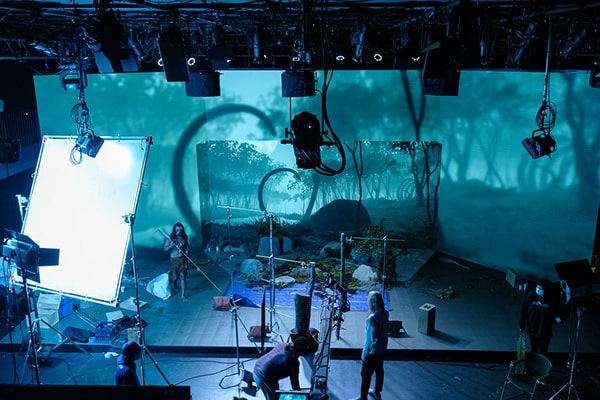 Production still, courtesy of the filmmakers

These languages are very different in quality and character, which is part of the interest of the film: the two main characters trying to bridge that communication gap, sharing words, sharing language. You may only notice it if you are a linguist or paleoarchaeologist but it was important for us to get all of those details because it will enhance the overall world of the film and make it feel true.

S&F: It sounds like you’ve been incredibly thorough. Does nonverbal communication come into play?

DB: Yes, my understanding from talking to our linguists is that early language is thought to have been largely signed. There was a combination of verbalizations and physical demonstration; that’s something we worked into the film as well. A lot of the most important words are things you need to do: things like eat, like skin an animal, or use a tool.

S&F: There’s something poetic about the film thus being accessible to international audiences, be it through the use of subtitles or otherwise. For someone who doesn’t have any insight into the richness of the research you’ve done, what might resonate with them about the project?

DB: I think you can watch this movie and appreciate, Oh look, they’ve got manganese-based face paint and mica specs to create glitter. You can also just watch it as a fun action-adventure romp; there’s some romance and it’s a fun movie to watch. What I think makes it relevant today is that it is a story about reaching across this gap between people who look different but are equally human, who share cultural practices and a rich tapestry of being. I wanted to make very clear that ancient people were not–for lack of a better word–`primitive.’ They had a rich, beautiful way of expressing themselves in the same way that indidgenous cultures do today.

S&F: It’s interesting that you’re telling a very old story with some timeless themes, but with cutting-edge technology.

DB: Our project has the distinction of being the first low-budget, independent film to be shot entirely on a virtual production stage. That technology uses LED projection screens, A.I., and visual tracking technology to create virtual environments and then project those into a physical space. That way your actors can actually inhabit this alien or faraway world that you’re working in. We wanted to create a Paleolithic world that didn’t look like anything that exists in the modern world. Fernando, to his credit, was able to build a really great suite of collaborators who could make use of that technology and it was a real experience.

S&F: Given your background in documentary filmmaking, which involves being out in the field, how was the choice to embrace virtual production made? And how did it feel to shift into that mode of production?

DB: I Initially thought we would go into the woods in upstate New York, drag a bunch of cameras and equipment into the bush, and then Fernando came along. He said, “I think we can make something very unusual, powerful, and interesting that doesn’t look like anything else if we go this way.” I thought it would be impossible, that we could never afford to do it.

Still, THE LION AND THE FIREBIRD, courtesy of the filmmakers

Fernando González Ortiz: It was very crazy to me too. I think the first time I met with Daniel, I pitched it to him as a plan B, given COVID-19 and everything going on. We continued developing two versions of our short until the end of last year but there was a point in September where we saw there was no way back, having seen what we could create. Daniel wanted to show this Paleolithic world that had never seen before. What we could do in upstate New York was not the culturally complex world we wanted, when instead we could show mammoths in the background of a volcanated environment. We knew it was the right way forward even though it seemed impossible. Luckily, I met with a lot of people who guided me through the best way to go about it. Worldstage gave us a reasonable rate because they saw a lot of potential in the film. We came along with a mismatched set of cast and crew that by no means should have been doing this but it worked.

S&F: The ambition alone is very inspiring but it sounds like this mode of production enabled you to further respect the research you had done.

DB: Yes, it opened up a number of exciting opportunities as a director. This technology has been used primarily for tech demos, but we wanted to use it as a storytelling tool. We wanted the physical elements of that [virtual] world to be relevant to the journey of our characters in an emotional way. So for example: we wanted lightning to be flashing in the background at certain moments of tension and fear; we wanted volcanoes to be erupting as the climax of the film erupts. In real life, you can’t just tell a volcano to erupt–and you wouldn’t want to! But in virtual production, our environment designer was able to build us some pretty sophisticated rigs that would integrate our lighting grid with the virtual space. So when lightning flashed in the virtual space, the lighting grid would also light up on our actors to create these very nuanced lighting effects. We could do the same thing with volcanic eruptions; all these reds and yellows would spray out across our lighting grid as volcanoes erupted in the background. It allowed for some very dramatic moments.

S&F: What’s next for the project and for each of you?

FO: We’re applying to a couple of finishing grants. The Epic Real mega-grant for virtual productions and video games, for one.

DB: We need to get it done, that’s the immediate thing. It’s going to be in the Columbia University Film Festival in May, after that we’re going to be putting it into festivals worldwide and we’ll see from there. We’d love to expand it into something bigger.