The second season of National Geographic’s scripted anthology series THE HOT ZONE, which premiered in 2019 with a season about the Ebola outbreak, is based on the true story of the investigation into the mailer of the Anthrax letters sent around the U.S. weeks after 9/11. Starring Daniel Dae Kim as FBI Special Agent Matthew Ryker and Tony Goldwyn as suspect Bruce Ivins, the new season is now streaming on Hulu. We spoke with Showrunner and Executive Producer Kelly Souders about this season as compared to last.

Science & Film: Between the first season of the THE HOT ZONE and the second, did the pandemic—the subject of season one—change the way you were thinking about the series?

Kelly Souders: We were writing episode five when we were sent home to isolate. After the first season, I think all of us saw the warning signs early on. I kept tracking information those first weeks and was like, this is it, this is what we’ve been studying for years to prepare for this series. Sadly, not surprisingly, it played out like all the scientists for decades have been warning the world about. That was unnerving, to say the least. Our show delves into scientists on the front lines, and it’s not something you often get to see. I feel lucky that Nat Geo created this platform that allowed us to see behind the scenes with those scientists who are the most selfless people I’ve ever spoken to. They’re not doing it for themselves or their kids, they are working around the clock for humans and the planet. Being immersed in that over these two seasons and then watching what’s going on daily on my TV, it’s a pretty profound experience and I feel really lucky to have seen the real side of things and not the misinformation that’s out there. 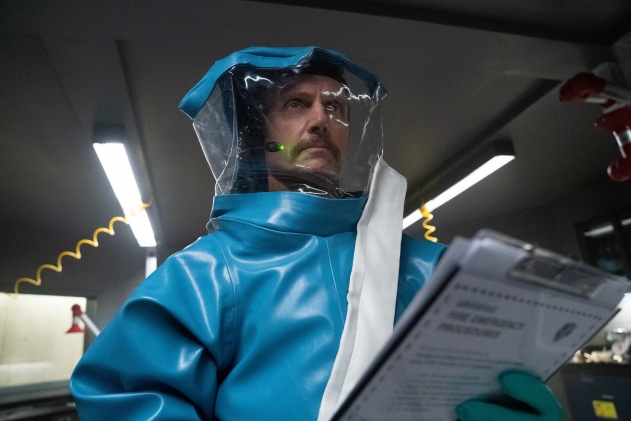 S&F: How did you approach writing and directing Agent Ryker, who Daniel Dae Kim plays, as well as the character of Bruce Ivins?

KS: I had never thought about the fact that there are scientists in the FBI—there are people from all different fields that work within these agencies. What we needed was somebody who could take us through the full seven years, who were boots on the ground everywhere, during every part of the investigation. We wanted to show what it was like for an agent just after 9/11 to deal with the trauma and guilt that anybody who was in a position to protect civilians was feeling. We started talking about the notion of PTSD, and how we could weave that in and let it percolate and change throughout the episodes. [We also discussed how] not to put a perfect cherry on top at the end, because this is a pretty grey ending on many different levels.

As far as Bruce [Ivins], we really just read accounts of him. Nothing to me is black and white; it’s a really complicated story, he was a complicated person, and the case was complicated. My job is not to sit here and act like it’s perfectly [clear-cut], my job is to try and present a story that’s compelling but also has facts of what the FBI was looking at. I think people are going to be conflicted at the end of it.

S&F: In terms of the future of the series, do you have thoughts about season three?

KS: We have quite a few ideas and it would be great to do another season. Right now, we’re all focused on getting this one on air and then some space will open up in all of our brains. It’s been such a great ride. Both seasons, I can’t say they’re easy, they’re incredibly challenging—by far the most challenging shows we’ve ever done—but they are incredibly rewarding especially when you have so much talent, from the cast, to the crew, to the directors, to our amazing post[-production] team. Across the board, people were really engaged and gave it the best they could, and we have this incredible result because of it.

THE HOT ZONE: ANTHRAX is now streaming on Hulu.