Even before its title appears onscreen, director Thomas Verette's ZERO GRAVITY sets the scene with views of Earth and of an astronaut spacewalking near ISS, as he says over the communications channel “My God, this is beautiful.” Then we return to Earth and the Silicon Valley city of San Jose in May 2017. At a briefing about the educational program Zero Robotics, we meet one of the film’s main protagonists: Tanner Marcoida, director of after school activities and summer camp at Campbell Middle School.

Zero Robotics is a multi-week summer program sponsored by NASA, MIT, and other agencies, which introduces middle school and high school students to robotics and coding, with a unique twist. The robots they are coding are basketball-size satellites called SPHERES that can freely maneuver in zero gravity aboard ISS. Student teams at different schools program computer simulations of the robots performing a complex set of tasks such as docking and delivering equipment. These activities could help build a system of satellites to survey Mars, much as an orbiting satellite network supports the Earth’s global positioning system (GPS). Each team’s efforts will be uploaded to ISS, where an astronaut will monitor competing programs as they control real SPHERES. The team’s entries will be rated for accuracy, speed, and efficiency until elimination rounds produce winning teams. 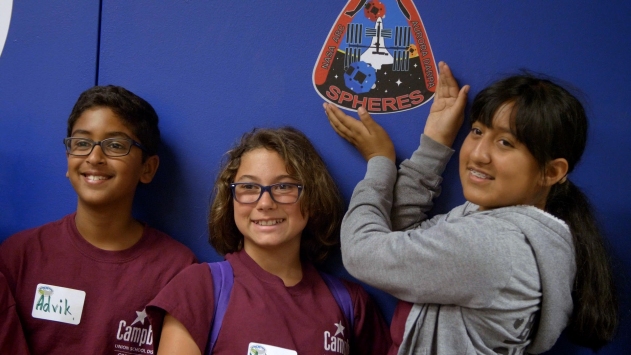 This is Tanner’s first time leading a Zero Robotics project. He wants to try it because he sees the value of students learning coding for future careers and thinks that connecting coding to space and exploration will inspire them. The woman giving the briefing, Katie Magrane of the Innovation Learning Center, makes another important point when she says, “with the middle school competition, we’re trying to engage the marginalized, disengaged youth so that what happens is eventually we’ll see a diversification of that pipeline.” Diversity is not otherwise explicitly discussed in the film, but we see what it means through three particular students as Tanner and his class begin attacking the robotics problem.

Eleven-year-old Makayla Engelder was thinking of being a marine biologist when she heard Tanner talk about Zero Robotics. She had never done coding but wanted to try. Advik Gonugunta didn’t have a definite career in mind at age 10 but thought it was cool that you could make something from Earth go out and visit other places. Ten-year-old Carol Gonzalez, originally from Mexico, wanted to be a robotics engineer when she heard Tanner’s pitch on Zero Robotics. After these brief introductions, the film weaves the student’s and Tanner’s stories into their efforts to encode a winning strategy for controlling a SPHERE. Also mingled in are clips of NASA’s past successes and failures, like the space shuttle Columbia disaster that killed seven astronauts in 2003.

One of the film’s best, most telling scenes shows bilingual Carol carefully explaining Zero Robotics to her mother in Spanish. Advik, who is Indian American, at age 6 ½ asked his mother if he could change his skin because a friend told him he didn’t belong here. “That was a big wake-up moment for us,” she says onscreen, “we just wanted him to be happy in his own skin.” Makayla and her siblings live with her grandmother because of family circumstances. Makayla finds working in a team “amazing.” With her love of oceans, she has an insight that floating in water is like experiencing zero gravity. Tanner shares his story with the students. His 92-year-old grandfather (who we meet in the film) came to the U. S. from Mexico and worked for NASA making parts for ISS. That connection has kept Tanner linked to the Latino community and the space program. 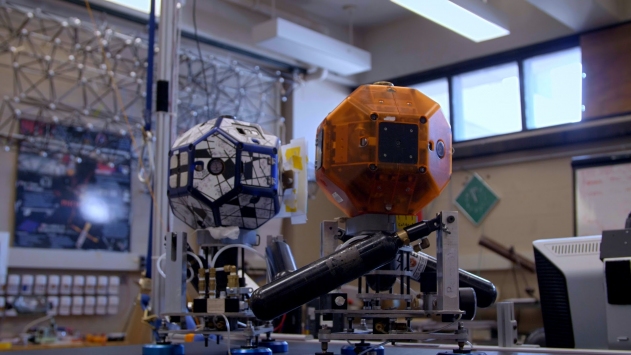 As we absorb these stories and watch the progress in coding, the clock ticks down toward the submission deadline. With minutes to go, the students find a programming error and change their strategy and code, barely in time for Carol to send in the final result. Then the action switches to the ISS orbiting 250 miles up. Students from sites in California, at MIT, and elsewhere watch live video of astronaut Jack Fischer working with the SPHERES. These watch parties are like athletic events, with team T-shirts and banners, and with tension building as the programs face off against each other. Despite the last-minute glitch, Tanner’s team thinks they have a good chance of winning. If they do, they’ll represent California against other state winners.

But do they win? If you want to know right now, read below.* If you’d rather find out by watching the film, skip the spoiler and think instead of other means of “winning.” 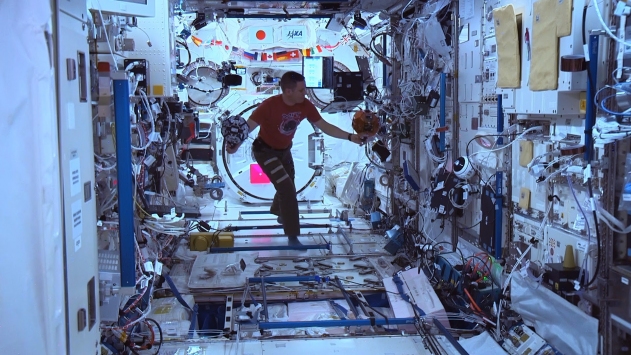 ZERO GRAVITY wins as a film because it beautifully involves us with these bright and appealing kids, their families, and their teacher, and with how reaching toward space affects them. It also wins by subtly showing the power of teamwork, and the benefits of diversity within a team. Zero Robotics wins too for its role in helping students form their intentions towards scientific careers, as shown in a postscript to the film briefly telling us where the three students are in 2021.

As of this year, Advik is making a real thing out of his space experience, contemplating a career as an aerospace engineer. Carol also wants to remain in science, but in biochemistry research rather than robotics. Makayla has moved into a different field, the arts, especially animation and theater. Yet in the film her imagination came up with an unexpected perception, linking the oceans and space as similarly unknown territories where “you can discover stuff that hasn’t been discovered yet.” That’s another win for ZERO GRAVITY and Zero Robotics: getting artists, or really anyone who isn’t a scientist, to bring new vision and creativity to the field.

*The Campbell team’s program came in fourth in California, a good showing for a first-time effort.