Pablo Weber on Homage to the Work of Philip Henry Gosse By Sonia Shechet Epstein | October 26, 2021

Pablo Martin Weber’s 22-minute associative essay film HOMAGE TO THE WORK OF PHILIP HENRY GOSSE questions the way technology mediates the human gaze. Weber culls from images taken by NASA’s Mars rover, those created by ISIS, and illustrations by 19th century naturalist and science communicator Philip Henry Gosse, who tried to reconcile the Biblical account of Earth with geological observations. Made as a university assignment, HOMAGE TO THE WORK OF PHILIP HENRY GOSSE has played at festivals around the world including Sheffield Doc Fest, the New York Film Festival in the Currents section, the Camden International Film Festival, True/False, and Argentina’s Mar del Plata International Film Festival where it won the Astor Award for Best Argentinian Short. We spoke with Weber from his home in Argentina.

Science & Film: Why did you choose the work of Philip Gosse as a starting point?

Pablo Weber: Jorge Luis Borges wrote about Philip Gosse. This associative nature of the film is quite an Argentinian tradition and was important to Borges’s essay style. He was a very well-read person and made these crazy associations, and I wanted to make an implicit homage to him. But I did not know about Gosse via Borges, but from a book by a Slovenian philosopher named Alenka Zupančič called What IS Sex? The first images that I had were [not those by Gosse but were] actually Syrian war images. The Gosse-Syria association is probably the most interesting thing about this short film.

S&F: Can you say more about that?

PW: I think the Syrian civil war is probably the most geopolitically interesting event of this century, because it’s a microcosm of the 21st century. The Islamic State has a distinct style and aesthetic. It’s very interesting to see the audiovisual productions made by them, by the Assad government, by Al-Nusra and all those organizations, but also to see the baseline productions by regular Syrian people. This strange relationship that these audiovisual productions have with “reality” is the association I made with Philip Gosse.

S&F: Is there a particular interest you have in scientific illustration?

PW: What interests me about the illustrations is their relationship to reality. Now, I’m actually making a film which uses Ernst Haeckel’s illustrations. I’ve been reading about the technique he used to draw. He had to divide his vision; with one eye he looked at the microscope and with the other at the paper. He had to make these associations within his vision and then he created something new. You can see that this technique had aesthetic consequences. I think about contemporary filmmaking and it’s very important that we create thought around our own aesthetic practice and reflect upon the way we relate to machines in the act of creating images. This would be very interesting for art in this century. We have to go back to the 19th century to see how people created these masterworks. 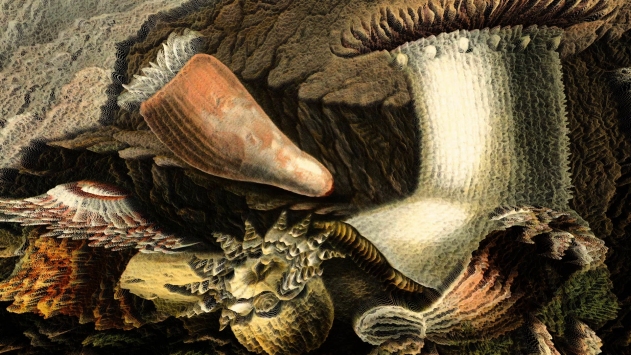 Still from HOMAGE TO THE WORK OF PHILIP HENRY GOSSE

S&F: You also chose a lot of images from the Mars rover to include. What interested you there?

PW: What interested me about the Curiosity Rover was the raw database on the NASA website. I love to randomly see things. I will spend 30 minutes just randomly clicking on images which are actually very big files, if you have an Argentinian internet connection. It filled me with wonder and awe to think I’m clicking on an image taken on another planet and it will manifest itself on my screen at a very slow pace. On an elementary level it was fascination. The other dimension [that interested me] is as Latin Americans our relationship to the developed world and these grand, collective projects which do not include us—Argentina is not on Mars, the United States is. We have to think about this from our own position, away from the center, which has aesthetic implications, political, and even legal implications. I don’t know if I have the rights to click on those images.