BECOMING COUSTEAU, the latest documentary by two-time Oscar nominated filmmaker Liz Garbus (WHAT HAPPENED, MISS SIMONE?), explores the life and career of Jacques-Yves Cousteau. Edited together from over 500 hours of archival footage, we see Cousteau’s persona in front of the camera as well as his evolution as a filmmaker, his joyful though at times tragic personal life behind the scenes, and his development from spear fisherman to environmental advocate.

BECOMING COUSTEAU premiered at the 2021 Telluride Film Festival and played in the TIFF DOCS section of the Toronto International Film Festival, and will be released into theaters by National Geographic Documentary Film, Story Syndicate, and Picturehouse on October 22. We spoke with Liz Garbus about her interest in Cousteau, the archival work that went into the film, and why it feels like the right moment for BECOMING COUSTEAU.

Science & Film: What was your familiarity with Cousteau as you began this project?

Liz Garbus: I was very familiar with him as a child who grew up watching his TV show, but that means I was familiar with a certain facet of him which was that outward-facing explorer. As we talk about in the film, his shows lost audience as time went on, as he became more alarmed and more committed to sounding the alarm about the environment he saw in distress. Of course, as a young child and TV viewer, I was not as aware of that side of him. For me, it all started when I was reading a book to my then quite-young son about seven years ago. It was a book that was talking about the undersea world and explorers. I realized as we were reading about Cousteau that he was becoming entirely lost to my son’s generation who was growing up steeped in and surrounded by imagery that was made possible and popularized by Cousteau, and he would be a worthy subject to explore. But of course, just wanting to explore someone’s legacy doesn’t make it that interesting of a film. What I realized was that his story had a timely arc: seeing his transformation from hubristic adventurer to determined conservationist was exactly the message we needed in this moment in time, as we as a global community turn from hubris to conservation and hard choices. 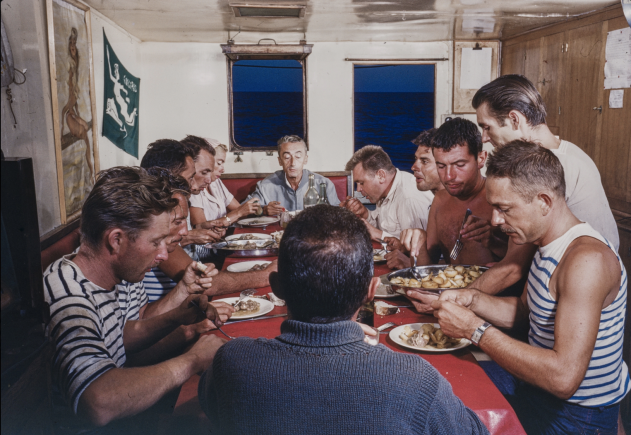 Jacques Cousteau with crew aboard Calypso during a 1955 expedition in the Indian Ocean. Credit: National Geographic/Luis Marden.

S&F: Can you talk a bit about the process of gathering footage for the film, and any obstacles you faced?

LG: It was a long process; six years working with the Cousteau Society to get access to all of his archive, outtakes, notebooks, and journals. Much of his work has been seen before on television and films, and that was widely available. But I really wanted to focus on the behind-the-scenes man to the extent I could and open up that archive to a generation of people who were unfamiliar.

I’ve made films about several historic figures and artists, and in my experience, there is always a fierce protectiveness of their legacy and archive for obvious reasons. It did take a lot of work and a lot of back and forth to feel the trust. I’m grateful that they did open that world to us. It took a long time and I understand that; it’s the legacy that they were very concerned about protecting, but at the same time if you protect it so much that it doesn’t get seen, then you risk losing that person to history. Cousteau himself said: if one person has the opportunity to live an extraordinary life, they have no business keeping it to themselves. I tried to continue to refer back to his own words as I was working with the family to get access to the archives.

S&F: One thing that stood out to me in the film is when Cousteau says he doesn’t want his films to be considered documentaries. He wanted them to be adventure films. You are a documentary filmmaker, when you came across that quote, what did you think?

LG: We laughed. As soon as I heard him say that, I said, that is going in this film, it is not ending up on the cutting room floor. First of all, it’s very funny for people who are in my community. But also, Cousteau was not making films at the moment that we’re in where the concept of documentary has evolved, not so much in the form but in people’s reaction to it because of the popularization of documentaries with the explosion of streaming services. But [the quote is] also a statement of his early intent and mission, which was to entertain and to show people what they had never seen before, and wow and awe them. Of course, that leads to this confrontation we talked about where he realizes that is not enough. 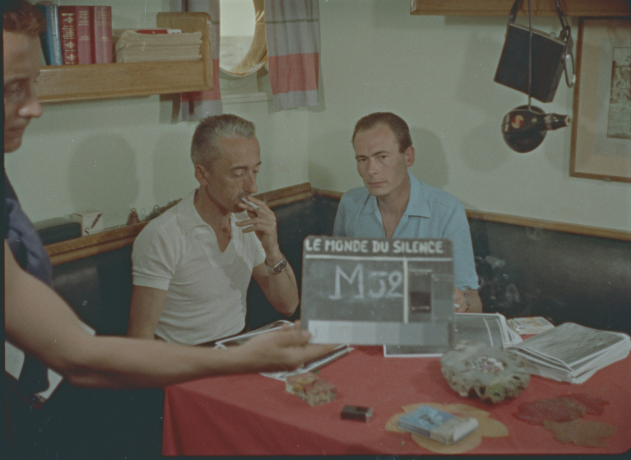 S&F: What are your hopes for the film’s release? Is your son’s generation the audience you have in mind?

LG: It feels like it’s a wonderful opportunity for family viewing and co-viewing, because there are so many of us in my generation who grew up watching his TV show and have children who aren’t familiar with Cousteau but are super interested in the undersea world and the environment. This new generation is not just turned on by Shark Week but also by the struggle to protect the planet. I hope it hits that sweet spot where families can come to it for their own reasons and get different things out of it; for those of us growing up with Cousteau it’s a walk down memory lane but also exposure to much more complexity about the man himself. For the younger generation, it speaks to the evolution of a conservationist.

S&F: In terms of making a film that is, as you said, about the evolution of a conservationist, as well as about larger environmental issues, but also very much about this man, did you feel like those things were at odds with each other at any point? There is a moment in the film when Cousteau gets fed up with people’s interest in him, because he wants the discussion to be about the bigger picture issues.

LG: I totally understand your question but I actually don’t see it as a paradox, because in the early parts of his career Cousteau was very interested in creating a global persona and in having his inventions and discoveries as widely viewed as he possibly could—that’s why he quit making feature films and moved on to television, and that’s why he didn’t keep working for oil [companies]. He was very dedicated to the idea of becoming as widely known as possible and he certainly was in front of the camera. But I do think that at a certain point, when he became as alarmed as he did about the warming oceans and decay of the reefs, he started to realize the limits of celebrity. People were more interested in his name on a piece of paper than engaging in a global dialogue about preserving the undersea world. So, I don’t think it’s a tension, it is in some ways the story of his life. He created this global personality but then confronted the limits of celebrity. People didn’t want that complex message, they just wanted the happy man in the red cap on a boat. For us, the film is about foregrounding that message, which became his life’s mission, and making sure it is remembered.

BECOMING COUSTEAU is directed and produced by Liz Garbus and written and edited by Pax Wassermann. It is also written by Mark Monroe, and produced by Dan Cogan, Mridu Chandra, and Evan Hayes. It is scored by Saunder Jurriaans and Daniel Bensi. It will be in theaters starting October 22.