NYFF: All of Your Stars Are but Dust on My Shoes By Sonia Shechet Epstein | September 29, 2021

Presented in the Currents section of the New York Film Festival, artist Haig Aivazian’s 18-minute film ALL OF YOUR STARS ARE BUT DUST ON MY SHOES explores the history of how the presence and absence of light has been used to exert control by institutions of biopower. We spoke with Aivazian from the Beirut Art Center, where he is the Artistic Co-Director, about the film’s themes and his process.

Science & Film: Why did you choose light as a focus for the film?

Haig Aivazian: Light is the penultimate visibility, but then there is all the invisibility of not just its infrastructure but electricity itself—it travels all around you, it travels distances, but you never experience it other than when it activates something or shocks you. There’s something metaphysical I’m always interested in, and something cinematic and poetic; cinematic in the mechanical sense but also with a capital “C,” like directorial. All this to say it’s a compelling element.

The film looks at the administration or withdrawal of light as a policing tool, a way to monitor movements in a city. But there are other allusions in the film to the production of light, bringing light to cities, and what that does even before electricity. It organizes hard labor and effects the environment. The violence of that was a point of interest. 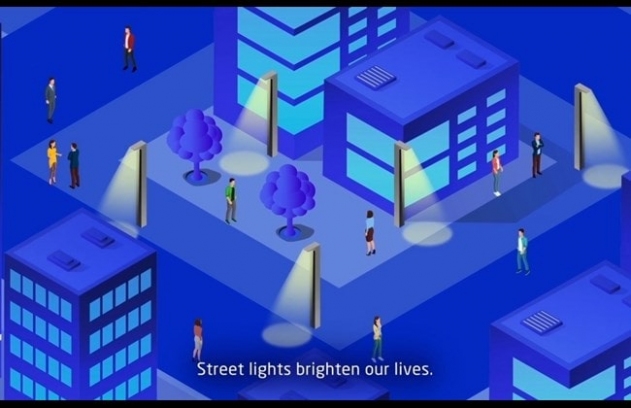 S&F: How did you narrow your focus to the paths the film goes?

HA: There is a broader trajectory of the work, where sport was and continues to be a big point of interest. [I am interested in] the stadium as an enclosure with exceptional rules—some kind of testing ground—for various legalities, technologies, and forms of surveillance. It’s one of these sites that I think contains a lot about the state of the world. Lighting in there is a very present element. I’m interested in elements that don’t have a stable value necessarily: light is not always good or bad, darkness is not always good or bad. When I was looking at this theme, I was also looking at different kinds of gazes: players, fans, the population at large—those trying to get in and those contained within. Depending on the kind of gaze that’s brought upon them they occupy different subjectivities. When the light is shining on an athlete who is exceptionally talented, that light is a positive light. But when it’s being shone on the face of someone in the vicinity of the stadium or who is being searched…

The other aspect is thinking about technology, surveillance, and mass surveillance. At some point I realized that public lighting was the first form of that. It’s a police initiative. It was this first negotiation of privacy, giving up privacy for safety.

S&F: How did you source all the references that are in your film?

HA: There is a database I’m constantly accumulating. It’s an ongoing part of my practice that gets more focused when I have a sense of what I will be working on. I also shoot a lot of stuff—things that remind me of something I know I’m interested in or are just pretty or evocative. I’ve always worked with found footage, even when I’ve made films that include what I’ve shot. In previous work I’ve been more heavy-handed in layering it, animating it, cutting things out. Not to say that I’m past that, but there’s something I’ve figured out in letting the material do the work. In this film, I come back a little to the layering, but it used to be another level of that where I integrated illustrations.

S&F: I love how your film leaves room for questions and doesn’t try to present a complete story.

HA: I alternate between registers in my work. I also make work around similar subjects that are straightforward and say what it is that needs to be said. I’ll do a body of research and writing, and often the first iteration will be some sort of lecture/performance, then I can allow myself to be more associative and more open-ended. I’m nearing a phase where it will be back to more hard-nosed work.

ALL OF YOUR STARS ARE BUT DUST ON MY SHOES, directed by Haig Aivazian, will show at the New York Film Festival on September 30 and October 2 as part of the Currents Program 2.