A COVID Counternarrative: Nanfu Wang on In the Same Breath By Sonia Shechet Epstein | August 16, 2021

Award-winning filmmaker Nanfu Wang’s arresting documentary IN THE SAME BREATH reveals what was happening on-the-ground in Wuhan, China at the beginning of the outbreak of the novel coronavirus and tracks that reality as compared with official narratives being released by Chinese and American authorities. The film, which premiered the opening night of Sundance 2021, debuts on August 18 on HBO. We spoke with Wang from her home in New Jersey about the film’s complicated production and her hopes for its release.

Science & Film: How were you able to document what was happening in Wuhan at the start of the pandemic without being there?

Nanfu Wang: I started to make the film in January [2020]. The first members of our team were the producers I collaborated with on ONE CHILD NATION: Jialing Zhang, Julie Goldman, Christopher Clements, and Carolyn Hepburn. Jialing is Chinese like I am, so we immediately reached out to people inside Wuhan and friends we’ve worked with in the documentary and journalism worlds to find out who was inside Wuhan, because the city was locked down and there was a really strict quarantine. The starting point is always the most challenging because we couldn’t publicize that we were doing the film because anything that went public, we were afraid the government would notice and shut down. So, we were asking around in a very small group of trusted friends. The very first contact we established was with two people who were able to film inside of a hospital. We didn’t know each other beforehand, so it was a huge leap of trust. At the time, there was a lot of resistance to any media or cameras [inside Wuhan]. To establish that trust with the cinematographers, letting them know who I am and what I was doing, and what kind of risks they might have, that took time. From those two camera people, we were able to find more people, so eventually there were more than a dozen people working inside of Wuhan in different teams, in charge of different story lines and locations. By the time the outbreak reached the U.S. it was a similar, though much easier process, of finding collaborators.

S&F: Given that COVID is unprecedented in everyone’s lifetimes, and you had no idea how things would unfold, how did you formulate your approach to the subject?

There was a shift during the filmmaking in March, when the outbreak hit the U.S. That was astonishing to me because I didn’t expect it would happen in the U.S. and I didn’t expect how badly the response would fail. From then on, by April, I was clear about what the central theme of the film was. It is not a film about COVID or the virus, or how it started, or how it might end. To me, the film is about all the issues that exist in our society that existed before the pandemic, during the pandemic, and will exist after the pandemic: the issues of censorship, propaganda, disinformation, misinformation, lack of transparency, lack of truth, and lack of accountability for the ones in power. 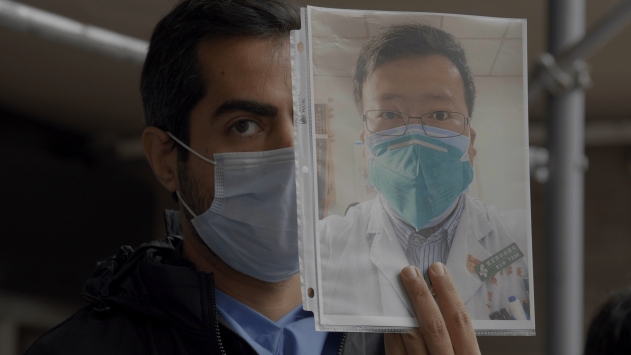 A nurse from Mount Sinai hospital protesting in front of the hospital in New York City. Photo Credit: Courtesy HBO.

S&F: How have you felt watching things evolve since the film wrapped?

NW: In terms of the world, I am at my most pessimistic view of all time. Seeing where we are right now, I think the Chinese version has mostly been deemed successful by the Western media, experts, and politicians. They have praised China’s response to the virus. That’s very disturbing to me because the film shows a different reality. What’s happening in the U.S. is not better. One thing I want the audience to see is that it would be a mistake, and even dangerous, to think the mistakes made during the pandemic were purely because of the Trump administration and all the problems went away after the election. The film shows that there is not one villain but very complex issues that exist in the U.S.

S&F: Have you heard anything so far about a reaction to your film from those in China or those in the U.S.?

NW: Usually silence and censorship is the typical response in China. If they were to threaten and intimidate my family—which they’ve done already [previously]—I hope that won’t happen after the release. In the U.S., I really hope people watch the film and ask questions. If the film could allow them to see last year and the issues beyond the headlines and to make them question and hold power accountable, that would be rewarding to me as a filmmaker. 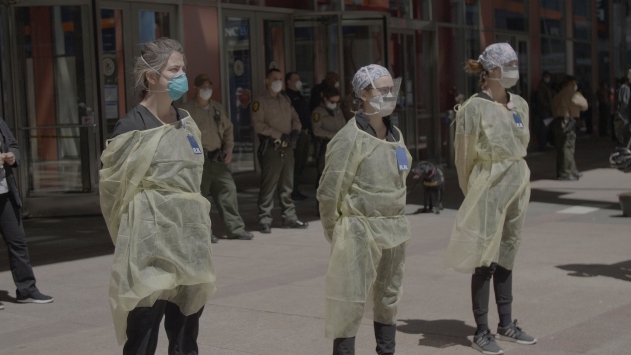 S&F: What drives you to make the work you do knowing what the consequences could be personally?

NW: Most of the time I’m driven by the feeling of, if I don’t tell this story I’m afraid that there is a part of the history that will be lost or only documented in one way. I hope, especially with this film, to document this part of the history as it’s happening. History is written by the authority in a very different way, and I hope this film can serve as a counter narrative.

IN THE SAME BREATH will be available to stream on HBO Max starting August 18. The film is directed by Nanfu Wang and produced by Jialing Zhang, Julie Goldman, Christopher Clements, and Carolyn Hepburn.