To Go Where No One Has Gone: Titanic Explorer Bob Ballard By Sonia Shechet Epstein | June 14, 2021

The documentary BOB BALLARD: AN EXPLORER’S LIFE, premiering on National Geographic on June 14, centers on the legendary undersea explorer who found the sunken Titanic, led the search for Amelia Earhart’s plane, and helped prove the theory of plate tectonics. We spoke with Dr. Ballard from his home in Connecticut about his 157 deep-sea missions, his latest mission, and the technology that he has used along the way. This interview has been edited for clarity and length.

Science & Film: One of the central points of the film is that your career has been much more than finding the Titanic. What do you see as your most important scientific contribution?

Bob Ballard: It was definitely the hydrothermal vents. That rewrote the biology book. [The discovery was part of] Project FAMOUS [French-American Mid-Ocean Undersea Study], the first humans to go down to the largest mountain range on Earth and confirm what was only then a theory of plate tectonics. I love science because when you finally figure it out, it’s simple. Before [the discovery] we thought all life on Earth was due to photosynthesis from the sun and we were a lucky little planet in the Goldilocks Zone. Then, we discovered no, we’re not rare, because the discovery of hydrothermal vents showed that extremophiles can survive on a meteorite which is how planets reproduce. That’s pretty heavy stuff. 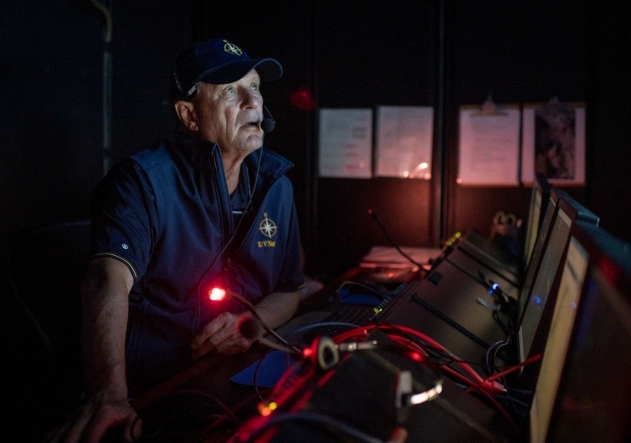 Robert Ballard in control room of the E/V Nautilus while on expedition in the South Pacific. (National Geographic/Gabriel Scarlett)

Two years later we found the Black Smokers and that the entire volume of the world’s ocean is actually going inside the Earth, and we threw out our chemistry book. So that was quite a rush. Like my mom says [in the film], too bad you found that rusty old ship because your epitaph is written, but in many ways finding the Titanic got me to talk to you, a lot of people are talking to me because I’m the guy who found the Titanic, and so it opened the door. I’m free now that I know my epitaph, it’s like I’ve been given another life. About every 15 years I reinvent myself. The book [Into the Deep] and TV show is putting a bow on 62 years of exploration and 157 expeditions. People say, how have you made all these discoveries? You know what I did? I went where no one has ever been: you can’t miss. That’s the secret.

S&F: Why do you want to share your work with others through film and TV?

BB: I’m so excited I can’t keep it in me. I enjoy sharing. I came back from Titanic to 16,000 letters from children all saying the same thing: can I go with you the next time you go? So I used telepresence with the JASON Project. Now what I’m doing is JASON on hormones. I take millions of kids with me. National Geographic with its relationship with Disney, it’s become a dream team for me because I’m a Disney kid. I’m about to talk to Geographic’s new chief scientist who is a paleontologist, and I’ve never been able to have that kind of relationship with the Society. Next, on July 3 we’re going where no one has gone before.

I’ve been commissioned by our country to map the 50% of our nation that is undersea. Most Americans don’t realize that half of the land we own is under the ocean and we have better maps of Mars than 50% of the United States. Isn’t that nuts?! We’re doing the second Lewis and Clark expedition, but I mandated that 55% will be women in positions of leadership so I’m calling it the Louise and Clark expedition. You’ll see Allison Fundis who was on the Amelia expedition. She is a rockstar. I turn 79 this month and I’m replacing myself with a great new team. 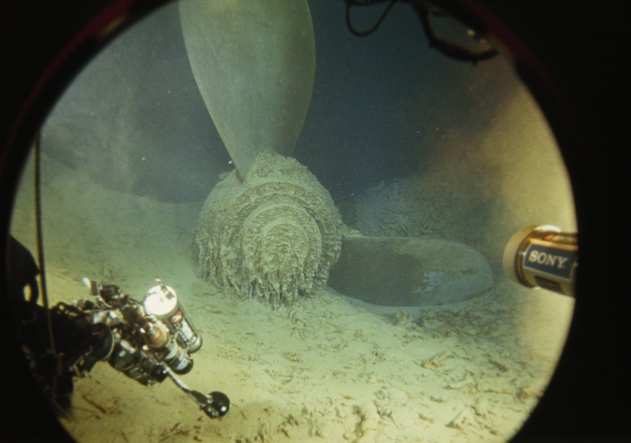 View of the propeller of the R.M.S. "Titanic" from the Mir submersible porthole. (National Geographic/Emory Kristof)

S&F: Can you speak a bit about the changes in engineering technology that have enabled these deep-sea expeditions?

BB: We are now moving into the robotic world. We’re moving away from remotely operated vehicles where we had a tether and were hooked up to the undersea robots. We’re moving into a realm of autonomous vehicle systems. I’ve been in the military and they are commonly further down the road technologically than society. As you know, in wars in Afghanistan the operator of the drone is in New Mexico. We’re doing the same thing underwater now. They’re called swarming AUV technologies. You can watch us in September send out underwater drones—we call them AUVs, autonomous underwater vehicles—and they do their thing and come back to our underwater robot Hercules and through an optical modem tell Hercules what they learned, which goes on the fiber, to the satellite, back with a mission. It takes a lot of the fun out of it actually but so what.

BOB BALLARD: AN EXPLORER’S LIFE premieres on National Geographic on June 14. An accompanying memoir, Into the Deep: A Memoir from the Man Who Found Titanic, is also out now. Dr. Ballard’s expeditions can be followed at nautiluslive.org.