Hovering between waking life and dreamscapes, COME TRUE is Canadian writer/director Anthony Scott Burns’s new horror film. Released by IFC Midnight this month, the film follows a lonely high school student named Sarah (Julia Sarah Stone) who runs away from home and finds refuge by entering a sleep study, which provides a bed each night. Unsure what the scientists are actually studying, Sarah submits to testing each night, only to find that her recurring nightmares start getting worse.

We spoke with Burns, who is also the film’s composer and cinematographer, about the film’s themes.

Science & Film: Why were you attracted to sleep paralysis and nightmares as terrain for a horror film?

Anthony Scott Burns: When I was eight years old my mother passed away, and immediately following I started to have this dream that I didn’t know was sleep paralysis. I couldn’t move and there was a shadow at the end of my bed. I couldn’t speak to it. At the beginning, it was a grief-entwined experience where I was sad that I couldn’t talk to my mom, then slowly it became fear when my brain started telling me that if this thing turned around and looked at me, I’d be dead. As quick as it came, it left, and I didn’t remember that experience until I was older and saw Rodney Ascher’s documentary THE NIGHTMARE. It freaked me out that there were so many people with similar experiences of shadows with eyes. That, mixed with a Berkeley release of a video where they were showing how they could translate ocular nerve signals from the brain into imagery, merged in my mind to say, pretty soon we’re going to be able to watch dreams. When we do watch dreams, what are we going to see about unified fears? What is it going to do for the theories of Carl Jung? Is it going to reveal that his stuff was all accurate? From there, I decided to make a film that would be semi-autobiographical: I grew up in a realm similar to Sarah—confused and upset. 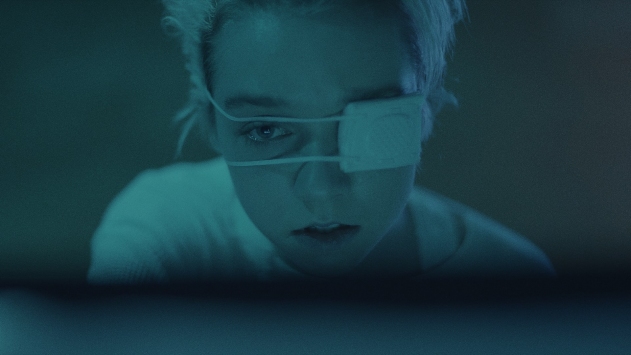 I wrote the film based on an outline I did with my friend Dan Weissenberger who helped me make it into something that made sense. I wrote the screenplay subconsciously and let these things come out, good and bad, so this would be a truthful portrayal of what I call a cinematic dream.

S&F: Can you talk about the production design and lighting choices?

ASB: My dreams are monochrome, so that’s is why the dreams in the film are also monochrome. My dreams also move much like a carnival ride moving forward. There are tons of little easter eggs in the film—they’re cinematic, they’re from my childhood, they’re from every person’s childhood. I was trying to make the film built of the collective consciousness. I’m trying to show the similarities between Sarah’s life, my life, and your life.

The visual style is based on movies that we’ve all grown up loving. I worked hard, within the realm of our budget, to make a movie that felt familiar and alien at the same time. The lighting styles are all semi-based on 80s movies, but a modern version. The production design is also modern but then it isn’t: there’s a smartphone and analogue gear that also makes no sense, which makes it uncanny and therefore you feel uneasy. That’s how dreams work. They’re right but wrong at the same time.

S&F: I’m thinking of the scene when Sarah first enters the sleep study and is given a very futuristic sleep suit but then the computer being used looks like something out of the 70s.

ASB: Yeah [laughs], with a user interface that makes absolutely no sense: it’s of a dream. That’s what I wanted.

The rules that your dreams abide by, Carl Jung says, come from the past. Dreams are where your fears and the things that shape all of us to some degree are passed down and we have to duke it out with them in order to see our true selves.

S&F: I’m much more familiar with the Freudian interpretation of dreams, and it sounds like you believe more in Jung’s theories, is that right?

ASB: [Jung’s theories] feel right to me because it feels like I’ve experienced so much more of the collective consciousness version of what dreams mean than the other side.

S&F: So Jung’s idea is not that dreams are individual manifestations of desires but that they’ve been passed down through generations?

ASB: Yes. One step further is that when we go to sleep at night, we all go somewhere together. That’s how you get so much bizzarro overlap in ideas, etc.

S&F: When writing the screenplay, did you work with any science advisors?

ASB: Yeah! We went to the sleep department at the University of Toronto. Ultimately the film is fiction, so I wanted to listen to my own heart more than reality, but we definitely wanted to get some things right, even down to how the sleep study advertisement is. We wanted it to look like something someone might see on a coffee shop board as opposed to a perfectly designed MATRIX introduction. It looks badly designed by some intern.

Behind the scenes of COME TRUE. Courtesy of IFC Midnight.

S&F: Why did you want to portray them as responsible?

ASB: I don’t like portraying education or science as something to be feared, so that’s why it was important to me. I don’t know that there are too many scientists with the goal of harming people. The harm in science comes from us not reacting responsibly as a people with that discovery.

I’ve often reacted negatively to movies where science or education is the enemy. So while my movies aren’t wildly realistic, I do try and layer in that science isn’t something to be feared, and that education is ultimately a positive thing.

S&F: Will these themes carry into your future work?

ASB: Technology as a means to see things that we’ve never seen before will always be interesting to me. Technology is advancing exponentially quickly and it’s going to debunk a lot of things and also maybe reveal some things. I’m intrigued by technology and sometimes fear the way it’s adopted so quickly. I have Asperger’s syndrome. As a filmmaker, I’m drawn to film and science—those two things are always going to be linked for me.

COME TRUE, which made its world premiere at Fantastia Fest, is now available on VOD through IFC Midnight. The film is written and directed by Anthony Scott Burns, produced by Steven Hoban and Mark Smith, filmed by Burns, and features music by Electric Youth and Pilotpriest (Burns’s music-making moniker). The film stars Julia Sarah Stone and Landon Liboiron.