Entropy and the End of the World in Tenet By Sidney Perkowitz | February 12, 2021

Movies have always played with time. The director tells you where to look and how time behaves as you watch, starting with dividing the story into scenes then choosing how to move between them, from slow fades to fast jump cuts that set different rhythms. Screen time can be slowed, quickened, or reversed and studded with flashbacks and flashforwards. This nonlinearity makes film the ideal medium to tell stories about physically altering the stream or direction of time, or how we perceive it. Nearly 240 films have done either in the last century but the latest, TENET (2020), may have twisted screen time to the ultimate, pleasing some critics and viewers and baffling or annoying others. For me, the film’s story didn’t jell, although it did provoke thoughts about science, film, and time.

TENET follows themes in director/writer Christopher Nolan’s earlier work. MEMENTO (2000) is a psychological thriller about a man who misperceives his personal time through recurring short-term memory loss, which he replenishes with photos to track what he can’t remember. The film represents this condition with black-and-white sequences in chronological order, and color sequences in reverse order. INTERSTELLAR (2014) is a science fiction film about humanity traveling through a wormhole to find new planets. Besides compressing distances, wormholes that connect black holes also skew time. That becomes an emotional story element as the time distortions allow a lead character to appear as a “ghost” to his young daughter in a different temporal era. The film’s science credentials were burnished when Caltech theoretical physicist Kip Thorne consulted for it and wrote a related book. 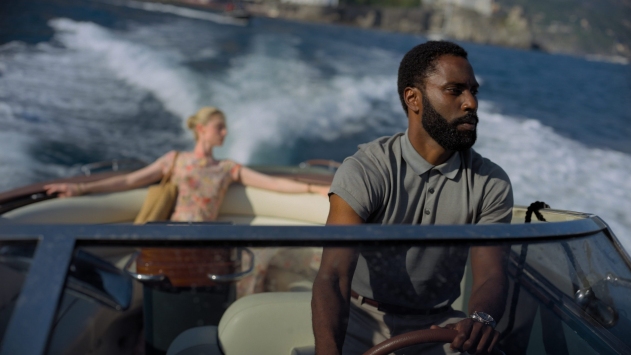 IMDB calls TENET a science fiction action-thriller, although it is less sciency than INTERSTELLAR, and the blinding level of action overwhelms any personal stories it might have developed as in MEMENTO. For TENET, Kip Thorne gave only limited help. “I promised him,” said Nolan, “I wasn't going to bandy his name around as if there was some kind of scientific reality to TENET. It's a very different kettle of fish to INTERSTELLAR.” That’s an apt comment, yet Nolan did bring in one science concept about manipulating time that I’ve never before seen in a film: entropy. The film also mentions some of the human, if not personal, philosophical and ethical conundrums that bending time would create.

It isn’t easy to summarize TENET, since its convoluted story slowly reveals itself over two-and-a-half hours. But writer Nate Jones has heroically produced a 3,400 word nearly frame-by-frame recap of the film. Supplementing my own viewing with his invaluable guide, here’s the CliffsNotes version.

The film begins as armed terrorists invade the opera house in Kiev, Ukraine, and capture a CIA agent played by John David Washington (who is only ever given the name “Protagonist”) after one inexplicable event: an unknown, black-clad figure kills Protagonist’s attacker with a bullet that seems, well, to travel backwards! The captured Protagonist resists torture and swallows a suicide pill but doesn’t die. He awakens as his CIA manager tells him that the attack was a sham designed to make Protagonist vanish, and that having passed the loyalty test of taking the pill, he is just the man to join Tenet. He learns more about what he’s joining when he visits a white-coated CIA scientist named Barbara played by Clémence Poésy.

Protagonist and his newly acquired Tenet partner Neil (Robert Pattinson) track the inverted bullets to the nasty, if not sociopathic, Russian oligarch Sator (Kenneth Branagh) who has connections to the hostile future. Through a subplot about art forgery, Protagonist approaches Sator via his wife Kat (Elizabeth Debicki) who hates her husband. Protagonist and Neil discover that Sator can invert people and things with a machine called a Turnstile. As the two probe further, we see scenes with simultaneous forward and backward action, such as a well-choreographed fight between Protagonist future and Protagonist past.

Finally, the scope of Sator’s evil becomes clear. He has terminal cancer and plans to destroy the world the moment he dies by triggering the Algorithm, nine devices that together will invert half the Earth. These are hidden back in time and at different locations. Protagonist and his Tenet allies, helped by Kat, cleverly use forward and backward time to disarm the Algorithm and save the world.

Besides other turns in the story, more than can fit here, there are two important blips of science exposition. In a breather from the action, Protagonist and Neil wonder about the “grandfather paradox;” if you travel to the past and kill your grandfather, have you killed yourself too? And in a discussion about reverse chronology, Neil casually throws in that it’s like “Feynman’s and Wheeler’s notion that a positron is an electron moving backwards in time.” This is an authoritative claim because, he modestly adds, “I have a Master’s in physics.”

Backwards electrons, entropy, and time travel – how much sense do these ideas make in this film? Most stories that manipulate time come up against temporal paradoxes and what they say about the ability to control our personal fates. From the purely physical viewpoint, cause followed by effect is utterly embedded in science. The fact that travel into the past would violate this chain is taken to mean that travelling backwards in time is impossible. If human thought and consciousness are determined solely by physical processes, we cannot do anything in the past either, except remember it. After centuries of philosophical puzzlement over these issues, no science fiction story is going to resolve them, so most do what TENET does: mention them, then ignore them and return to the action.

Entropy, however, does carry weight in the film because it is linked to the flow of time through the Second Law of Thermodynamics: for any system – say an auto engine – the entropy measures how much of the system’s energy is lost to friction-like processes, which turn energy into heat that can never be recovered. The loss grows as the system functions, and so the direction of the increase in entropy defines the way to the future. Entropy has been given the poetic name “the arrow of time” because of this one-way property of systems.

That said, this does not apply to a single particle alone. A video of a speck of dust in motion would not show a qualitative change when run forward or backward, and so would not differentiate past from future. This does not mean that Neil’s line about a backwards electron is wrong by itself. Richard Feynman, whose mentor was the eminent physicist John Wheeler, did invent a method of calculating how elementary particles would interact if you let an electron go into the past. But this is math that works on paper, not in reality, and Feynman’s idea for a single particle, not a whole system, wouldn’t qualify as an arrow of time anyway.

If the increasing entropy of a system such as a bullet points to the future, would decreasing its entropy take it to the past? Within the great system of the universe whose entropy is increasing, there are local systems such as your own body where the entropy decreases (this increases the surrounding entropy so it doesn’t violate the Second Law for the whole universe). We don’t think of this locally increased entropy as traveling backwards in time, however. Entropy may follow the flow of time, but we have hardly begun to know the nature of time itself and whether what drives it is just this thermodynamic principle. Still, TENET gets credit for using entropy as a dramatic marker of time. This is a break from other science fiction stories that use entropy metaphorically to represent a decaying universe, running down to the “heat death” of everything.

TENET struck many as long on running time and confusion and short on making emotional connections with its viewers. Yet, as Richard Feynman once brilliantly expressed, humanity has its own built-in time arrow that carries feeling: “We remember the past, we don’t remember the future. We have a different kind of awareness about what might happen than we have about what most likely has happened.” Now there’s a topic truly worthy of a humanistic science fiction film about time, entropy, and people.