Internet Comes To Bhutan: Sing Me A Song By Sonia Shechet Epstein | October 9, 2019

Award-winning documentarian Thomas Balmès (HAPPINESS) premiered his new film SING ME A SONG at the 2019 Toronto International Film Festival. The documentary begins with a seven-year-old monk named Peyangki ruminating about the possible impact of electricity, which is about to be installed in his village. His main fear is electrical fire. Bhutan was the last nation in the world to introduce television and Internet—it did so in 1998. Ten years later, Peyangki is a teenager still living in the monastery but obsessed with playing games and talking to girls on WeChat. He chats with one who he likes enough to leave the monastery to meet, but soon realizes that online and offline selves do not always match up.

At Toronto, we sat down with director Thomas Balmès, who also shot and produced SING ME A SONG. He was joined by Peyangki, who spoke with us with assistance from his translator Didi.

Science & Film: Thomas, how did you first decide to focus on Peyangki?

Thomas Balmès: When I saw him he was jumping and dancing all the time, always smiling, and it was so moving. There was also something kind of sad. He had a huge interest in everything. I knew immediately [that I wanted to shoot him]. He reminded me of Jean-Pierre Léaudwho has exactly the same kind of relationship to the camera. There is an amazing energy he [Peyangki] had, which, I have to say, he has lost a bit since he has been a bit addicted to this mobile phone. I think we all have. It is taking so much of our capacity to watch, see, and enjoy the rest of the environment. You can see the shift between Peyangki’s way of being in contact with the world between the beginning of the film and after.

S&F: Were you interested in this village because you knew they were about to get electricity?

S&F: Did the introduction of electricity and the Internet unfold in the way that you expected?

TB: Yes, they reacted the same way anybody does — there is not the slightest difference between their relationship to mobile phones as in Japan, the U.S., or anywhere. It is new and there is no distance from it.

Culturally, I think a bit like in India, there is no way of resisting and forbidding it. Buddhism says no worries, we can deal with this, there is nothing dangerous for us. Until 1998 there was no TV, no internet, nothing, and then the King decides to allow all of it. They went from nothing to 50 channels — STAR TV network. Among all these 50 channels, what did they pick up? American wrestling. But not in a little way; people were watching it 12 hours a day. In a country where killing a fly is unthinkable, they wanted to watch people beating one another. It’s still the case today that they are fascinated by American wrestling. Can you imagine? From nothing, to that?

S&F: Is there anything Buddhism teaches about what people view, versus what their actions are supposed to be?

TB: In terms of education, in these monasteries they don’t learn anything that they understand. They only learn Sanskrit by heart. Like Latin, it’s a language they don’t understand. They memorize it to be able to perform it in houses, but no one is explaining what Buddhism means. I don’t think even Peyangki has the slightest understanding of what is Buddhism.

S&F: Peyangki,what is your understanding of Buddhism as a religion or philosophy?

P: There are three forms that we consider: one is monk, one is master, and one is text. The monk he considers himself, he has a master and the text. The religion was started by Buddha. There are so many things to study, but I hardly understand the text.

TB: He has spent the last ten years learning things he doesn’t understand, which is crazy.

S&F: I can see why screens would be interesting. 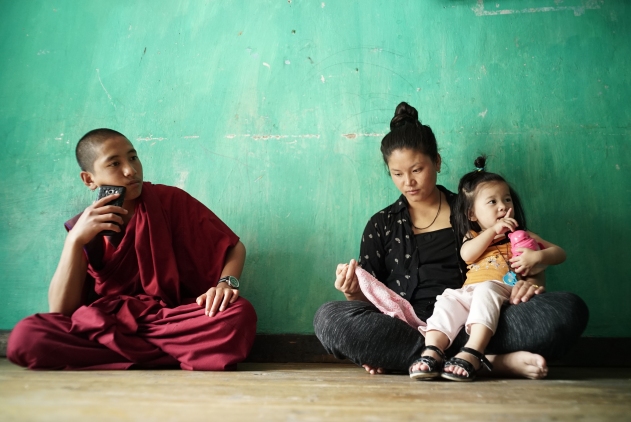 TB: I have been to other monasteries that are a little more sophisticated—this one is also remote and kind of basic because of that. But even if you go to other places, it’s very similar.

S&F: Peyangki, do you learn from what you watch?

P: I get to learn from the screen. I know how to make movies. I can download my film. I can upload my songs.

TB: He is amazingly talented. He creates Kung Fu movies with all the little monks—really impressive, a lot of effects. Everybody has a role, and he is always a big master saving everybody. He’s super creative. When he’s not doing these films he’s doing music video clips and he’s pretending to sing and dance. He does that with his sister and other villagers. He’s totally fascinated by filmmaking.

S&F: Like it has everywhere, it seems like the Internet has presented both benefits and drawbacks. It saps attention and perhaps the ability to relate fully to the world, but also it seems very engaging and a way of connecting with others, entertaining, and creating.

TB: I think most of the people in Bhutan would say that the positive aspect of all of this technology is that it allows them to stay connected to their family. For example, Peyangki’s friend Pengba who is in the film, his family is a two week’s walk from the monastery. It’s the most remote place in Bhutan. Without phones they were not speaking to their families for years. He’s been in the monastery for ten years and hasn’t seen his parents once.

S&F: Peyangki, do you see a negative to technology?

P: There are so many problems. Because of phones, we even forget to sleep. I used to play so many games. In the evening from 8pm till 2 or 4 in the morning I’m on the phone. I used to be like that. I even forget to go to studies. I lied to the great Lama [and said] that I’m going to the toilet and I’m on my mobile. That’s the impact.

S&F: Are you trying to change?

P: I have already changed. I am working for productive things, making movies.

TB: He is even using it to compose music. He is really spending 80% of his time doing creative stuff, not just consumerism and stupid games.

S&F: Have you shown the film in Bhutan?

TB: I’ve shown it to some people. We are planning to go back and do a real screening hopefully with the King. I’m interested in asking him why he allowed TV and Internet, because until 1998 there was nothing.

S&F: It was forbidden?

TB: Forbidden. This was unique in the whole world—there is not another country that had this kind of relationship, even in North Korea there are local outlets. Didi, the translator, has worked for PBS since 2010 as a sound recorder and mixer, and he is a very good assistant director. There is a small national TV [station] which has been created which is fighting against FOX network. With the kind of means they have it’s not easy, but they have local versions of the worldwide successes like singing contests, which works well. It’s very basic but people are watching. There are also endless hours of people doing bow and arrow, which is a national sport, so you can watch that for days. It’s really interesting to see. One minister decided to ban the wrestling channel when he realized people were only looking at that but there were protests and they allowed it again. I think there was something with porn that was successful; I think it isn’t on TV anymore, though it’s on the internet.

SING ME A SONG is directed, produced, and filmed by Thomas Balmès. It was made with support from Participant Media, ARTE France Cinéma, and Radio Télévision Suisse, among others.