Judi Dench stars as a retired physicist with a secret past in the new historical thriller RED JOAN. She plays a fictionalized version of Melita Norwood, who passed information about British atomic bomb research to the Soviet Union during World War II. Norwood was nicknamed the “granny spy.” There are, however, significant differences between the true story and the film, which we discussed on the phone with Stanford University Professor of International History David Holloway. Holloway first spoke about the film with producer David Parfitt at SFFILM, after RED JOAN’s U.S. premiere; the discussion was supported by the Alfred P. Sloan Foundation. RED JOAN is directed by Trevor Nunn (HEDDA), and stars Judi Dench, Sophie Cookson, Tom Hughes, and Tereza Srbova. It is now in theaters distributed by IFC Films.

Science & Film: There is one major difference between the main character in the film and the woman who she is based on: in the film she is a physicist. What can you tell us about the real story?

David Holloway: Yes, there is a very big difference between the character in the film and the character on whom the film is partly based. It was a woman named Melita Norwood who was not a physicist. She worked as a secretary in a British organization dealing with non-ferrous metals and she started, according to the information that’s public, passing information to the Soviet Union in 1934. She was a Communist and from a Communist family. The parallel between the movie and her life is that she was exposed as a spy at the age of 87. She became known as the “granny spy” and she defended what she’d done. She said she hadn’t really betrayed her country. That [scene] is at the beginning and the end of the movie; Joan, who at the age of 87 is discovered to have passed information to the Soviet Union, comes out and makes a statement saying she did this but it wasn’t betrayal. But the intervening story is really quite different because in the movie you have a young woman who is a physicist who is drawn into the British project on the bomb during the war and then decides after Hiroshima to pass information. In the panel discussion in San Francisco the producer said, this is a more interesting character than the real character who apparently hadn’t faced any moral qualms or confronted any ethical issues in passing information to the Soviet Union; she was a communist and thought it was the right thing to do.

S&F: Do you think that the character of Joan in the film, a female physicist, is a credible one? Could a woman have been in that role at the time?

DH: There were of course some very well known, outstanding women physicists—Lise Meitner was one in Germany. But I don’t recall in my reading that among the physicists in the British atomic project there were any women. The movie makes an issue of that, and brings that out quite well.

S&F: What did you make of the point that Joan makes in the film, that after Hiroshima she was worried about the future and felt that equal distribution of knowledge was the only way of avoiding catastrophe?

DH: There were a number of people who passed extremely important information to the Soviet Union, but much of that was inspired by the war and the feeling that the Soviet Union was an ally. The most important spy was probably Klaus Fuchs, a German refugee who came to Britain in the 1930s then joined the British mission to the Manhattan Project and worked in Los Alamos from the end of 1944. He passed details about the design of the plutonium bomb and provided a fairly detailed description of that design. His motivation was the German attack on the Soviet Union in June 1941. After that he went to the Soviet Embassy in London and said, do you know what’s going on? What he’s mainly telling them is, do you know that the Germans might be developing the bomb? So that’s a very different motivation from the motivation given in the film.

Now, it’s also of course a clever argument to say, if we have the bomb, then it’s dangerous for just one country to have it, so there need to be two [countries]. It raises very interesting issues about loyalty and betrayal. That was an argument, that Soviet citizens certainly told themselves. But there was the second argument that the world is safer if there is a counter-balance of some kind, which makes it less likely the bomb will be used. The producer pointed out that at the end of the film, Joan gives a very sly look. He said she’s saying, I got away with it. Then you begin to think, okay, the argument that it can’t be just one country with the bomb is a convenient argument for her to use. 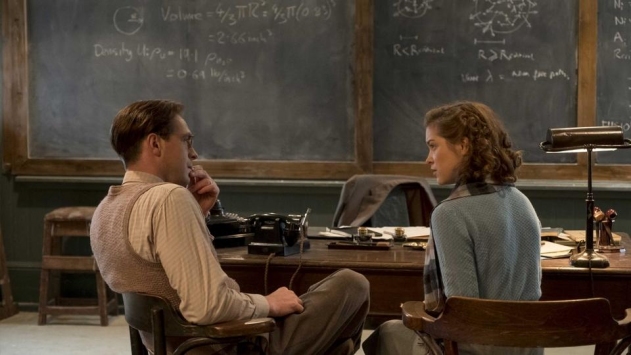 S&F: You mean maybe the character in the film was really a Communist?

DH: Yeah, that there is a kind of ambiguity in the ending. But I thought that didn’t come through quite, at least when I watched it the first time.

S&F: It’s a more universal argument to think that her rationale was to prevent war.

DH: Yes, some people believe that a nuclear balance, a mutual deterrence, has kept peace. Then in some ways to claim that is to claim a higher loyalty, namely peace of the world, rather than loyalty to my country.

S&F: Do you think that has been the major reason why there hasn’t been a nuclear war?

DH: It’s an interesting question. I’ve done quite a lot of research on Soviet nuclear history and I’ve talked to people who are weapons designers in the Soviet Union. They would raise the question that I think Americans never really raise, which was, if we, the Soviet Union, hadn’t built the bomb as quickly as we did, would the U.S. have attacked us? These are counterfactual issues so it is hard to be definitive. I think that political leaders during the Cold War were by and large very careful in their handling of nuclear weapons because they understood how terrible a nuclear war would be. But on the other hand, we came close to a nuclear war during the Cuban Missile Crisis for example. So I think it’s an ambiguous history. The weapons embody a great danger and we’ve been fortunate that the weapons have not been used in war since 1945. The issue then becomes, is it a stable balance? Can one go on relying on the existence of the weapons to prevent another world war? The problem is, we’ve come close to war. But I thought one of the interesting things in the film was the issue of loyalty and betrayal, both at a personal level and at a political level, and how you think about that.

S&F: Did you enjoy the film?

DH: I did, up to a point. First of all, I thought it was a terrific cast. The acting was extremely good. I think being a historian gets partly in the way of the story that’s really not historical, although the producer said, everything in the film was said by somebody but not always by the people saying it and not always in that order. [laughs]. I thought, well, okay… But he was very upfront about their relationship to history; it’s not aiming to be a historical movie so that’s fine.

The British were very early to see the possibility of the bomb during the war. And of course it was an immediate threat to the British if Germany got the bomb because the Germans could bomb Britain. The film shows a scene where Clement Attlee visits—which I think didn’t happen because even though Attlee was in the war cabinet, Churchill pretty much kept him out of anything to do with the bomb. But he comes and says, if we have it, I want a bloody Union Jack on it. That is said later by the foreign secretary after the war—it’s a classic line.

The producer told me there are two scientific jokes in the movie. One is where Joan is brought into the project and they’re talking about isotope separation and she says, what about using centrifugal force? He said that was put in as a kind of joke. It is forecasting the ultra centrifuges that become the dominant mode for isotope separation. But in fact there was discussion at the time about centrifuges, they just weren’t the promising technology. Apparently there’s also some equation that’s totally wrong or misplaced on the board which one is supposed to have seen as a joke, but I’m not a physicist.