The new documentary KIFARU, which won both the Audience Award and the Grand Jury Prize at the 2019 Slamdance Film Festival, follows the end of the life of the last male northern white rhinoceros. It focuses on the rhinoceros, as well as the men who cared for him. KIFARU is set in the Ol Pejeta Conservancy in Kenya; “kifaru” is Swahili for “rhinoceros.” Director David Hambridge was also the film’s cinematographer. We spoke with Hambridge by phone after the festival. KIFARU is continuing to play at festivals, most recently at Hot Docs in Toronto. Sudan, the rhinoceros, died in 2018, making headlines around the world.

Science & Film: I am curious about how you got access to Sudan, and whether it was already close to his death when you stared filming?

David: He was an old rhino, so I had a good guess [that he might die soon] when I met him in 2015. During a scouting trip I met James Mwenda, who is one of our main characters. When I met him, he wasn’t supposed to talk to me because there’s a competitiveness between the rhino caretakers. The elders are the ones who run the show but the younger guys speak really good English. I got to know James well and he was a great ambassador.

James got really attached to Sudan, and I could tell that James was very timid but wanted to talk to me. We hung out. More than Sudan, James was what attraced me as a storyteller, because he had a really strong voice, speaks great English, he’s very soulful.

In terms of access, I asked Richard Vigne [CEO of Ol Pejeta Conservancy] after my third trip to give me exclusive access to these characters and the way that I’m telling the story. I didn’t want anybody else to try to mimic it and do their own one-off. Richard saw a lot of value in it and I got the life story rights for them, which was something I had never done before.

S&F: This film is different than the other films that you’ve done to date, so why was this a story that you wanted to pursue?

DH: For me it was a human thing. I explain this film as a story about young guys in Kenya. It’s a human-centric story with wild life as the backdrop. Sudan is the connective tissue to these guys lives, he’s the reason they are friends. If it wasn't for Sudan—I mean they’re from different tribes, you know, there are a lot of tribal issues, especially around elections. 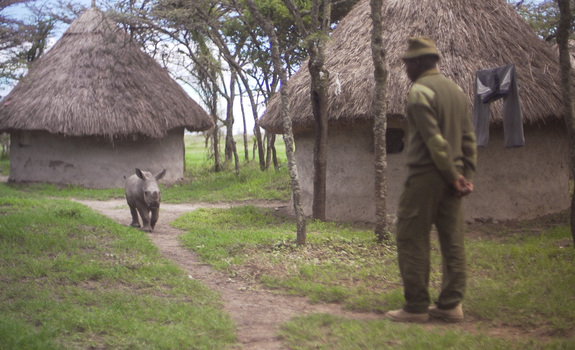 S&F: In some ways, your film fits into a cinematic history of considering the relationship between captive animals and their caretakers. I'm thinking of KOKO: THE GORILLA, for example, the Barbet Schroeder film. Did you think about any of those films while you were making KIFARU?

DH: No, I didn’t. I don’t watch enough movies as I should as a filmmaker. This might not be [true of] the films you mention, but I don't really like the wildlife films that are made. Like the typical [ones] with the British voice, western voice talking about African savanna and the mountains, the zebras, and the weather. I mean it’s just like okay, everyone can watch that on PLANET EARTH or learn about Africa in that way—it’s universal and looks beautiful. But, where's the story?

DH: There are groups that want to save the northern white rhinos. They have what they need—the skills and tools—but they’re in different parts of the world and each wants to be the first one to say they did it and so they don't share their information so much.I had met Dr. Morne De La Rey [an embryo transfer specialist] the morning of the day that Sudan had to be euthanized. He flew in from South Africa. As soon as Sudan passed it went right into a science experiment. They were cutting out the traccea, testicles, trying to save and hopefully to get any sort of sperm. They were unsuccessful with that, with getting the sperm. Theydid get a lot of other really important DNA from him. I switched from filming the guys’ faces as Sudan was taking his last breaths and went into robot mode. I didn’t have time to grieve. I focused my attention on Dr. Morne De La Rey and who was doing all the cutting, and the caretakers had to assist in that.

KIFARU is written, filmed, and produced by David Hambridge. Andrew Harrison Brown also produced and edited the film. Kevin Matley composed the music. The film is continuing to screen at festivals around the country.