The new puppet play CHIMPANZEE, created by Nick Lehane, is a one-animal show starring a nameless chimpanzee in solitary confinement in a biomedical facility. The chimpanzee enacts recurrent memories of being raised by humans. The play made its world premiere at HERE on March 7, and will resume performances on April 16 and run through May 5. We spoke with Lehane about CHIMPANZEE. His other puppet work has been shown at St. Ann’s Warehouse, The Wild Project, and the Pillsbury House Theatre in Minneapolis.

Science & Film: What inspired you to create CHIMPANZEE?

Nick Lehane: I read a book called Next of Kin by Roger Fouts and that was my introduction to the chimpanzee language and cross-fostering experiments. That led to Growing up Human by Maurice Temerlin and a lot of animal rights, activist research like the Humane Society, PETA, Save the Chimps, and Friends of Washoe.

S&F: We see the chimpanzee in your play reenacting memories of living with humans. I’m curious about the fact that they were all so happy.

NL: Yeah. Maurice Temerlin’s book Growing up Human is about Lucy [a chimpanzee raised by humans who] seemed to take her human family for granted and there was a loving, positive relationship. I think that may have been the seed for making the memories in CHIMPANZEE largely positive. Also the intense juxtaposition of a suburban, middle class American family life next to the most inconceivably solitary life of confinement and vivisection—being given Hepatitis C and electrodes in your brain… because a lot of cross-foster chimps didn’t end up in zoos. Zoos didn’t want chimps that behaved so culturally human. So behavior and pathogen studies were a more common route, from what I’ve read. I can’t imagine more diametrically opposed experiences. That’s part of what was scary and touching and drew me to the work, how far apart those experiences are. But they’re both man-made containers: the container of the home and the container of the lab.

I think all interpretations of the show are valid because it’s what people take away, but for me having a happy memory doesn’t necessarily make a positive judgment on an experience. You can look back on something warmly even if it wasn’t ultimately for your well being. So my hope is there is something bittersweet about these memories because of how the chimpanzees end up. That’s what was on my mind anyway. 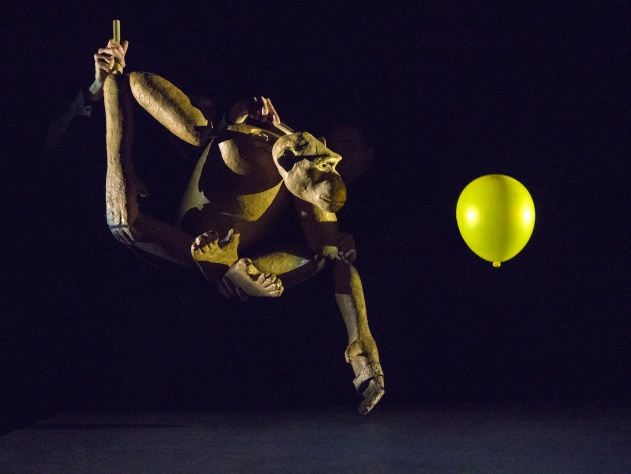 S&F: The other thing I’m curious about is the puppet’s movements. Where did you draw from for the jumping, and the different gestures?

NL: I worked with a team of really talented puppeteers, Rowan Magee, Andy Manjuck, and Emma Wiseman. We just watched a ton of video. I haven’t actually seen a chimpanzee in person since working on this. We watched videos of them in the wild. The Gardners were the scientists who raised Washoe, the signing chimp, and they filmed her at random to try to catch spontaneous signing. So there is a lot of really rich footage. It was really fascinating for me to see how chimps that were human enculturated behaved really differently. It’s uncanny how their behavior is modified even when they’re alone, so it’s not just to get rewards, it seems that it really changes their culture!

S&F: Can you say a little more about that, what you noticed?

NL: Signing to themselves, for instance. Playing with dolls by themselves. Looking at a picture book and signing casually. There was a chimp, I think one of the Gardner’s chimps, that would hoot involuntarily when they were about to steal a cookie and then would sign in ASL quiet, quiet to themselves. One of the reasons it seems that chimpanzees can learn some ASL and they can’t learn much English, in addition to the difference in lengths of their vocal tracts and the degree to which they have mobility of their lips and tongue, is that the parts of their brain that control their mouths are only the non-voluntary parts. So where they’re able to control their hands more voluntarily like humans, they have less deliberate control over their vocalizations. At least that was the understanding in the ’90s, says Roger Fouts. 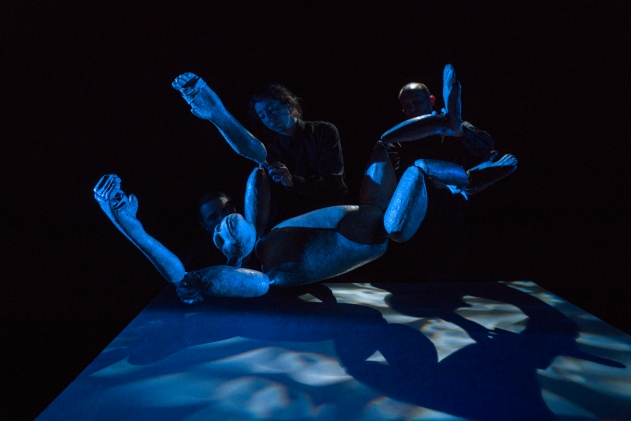 S&F: How long were you developing CHIMPANZEE? It seems like this is the kind of subject that could really take over all of your time with research.

NL: The first 15-minute iteration of it was developed over the course of a year in 2011 and 2012, and then a couple years ago I got inspired to make it a full play and that’s been about two years since of research and development on and off.

S&F: And it just has been extended, that’s fantastic.

NL: Yeah, thank you, I’m super excited about it.

S&F: What audience, if you have any particular one in mind, are you excited to see the play?

NL: I was particularly stoked when a neuroscientist who studies macaques came. He said he recognized the environment and the movement immediately, which freaked me out. I asked if he would send other people from his lab and he said he’d be happy to, but he worried some of the younger scientist would be disturbed because they haven’t gotten used to it yet. So that was bizarre and exciting because I’d love to reach people who actually have any kind of agency over how chimps are treated. I like hearing from people who come at it from really different angles, when people who are in the dance world see it I find they have really interesting take aways. From a puppetry/mask angle they have their own perspective. I think I’m most excited when people who “aren’t theater people” are interested in seeing it. That’s probably the most edifying.

S&F: I was really struck by the size of the puppet. Was to scale?

NL: She’s the exact size of an average-sized female chimpanzee.

S&F: Did you question making her smaller or bigger?

S&F: Did it have to do with being able to feel her in captivity?

Nick Lehane created CHIMPANZEE, which ran at HERE in Manhattan until March 17, and will resume performances on April 16 and run through May 5. The puppeteers of CHIMPANZEE are Rowan Magee, Andy Manjuck, and Emma Wiseman. Kate Marvin did the sound design, and Marika Kent did the lighting design. The play was the recipient of the 2019 Jim Henson Foundation Residency at the Eugene O’Neill Theater Center.

On April 28, Science on Screen at the Museum of the Moving Image will present a rare film from the American Museum of Natural History archives that a curator filmed in 1931 of his attempts to raise a chimpanzee named Meshie with his family in Long Island. For more information on WILD LIVES, see the Museum’s program page.

All photos by Richard Termine.