Throughout the history of cinema, the moon has been a character and a destination. The current exhibition “The Moon—From Inner Worlds To Outer Space” at the Louisiana Museum in Copenhagen features of 200 works in film, and also in photography, drawing, painting, scientific imaging, and sculpture spanning centuries. The works were produced by primarily Western cultures, and take the moon as both subject of study and artistic inspiration. As the exhibition’s curator Marie Laureberg writes in the fine catalogue, “it may well be that the moon can be mapped, but it is also the territory of the imagination,” (p 27).

Technically speaking, the moon is about one-third the size of Earth and has existed in its current form for over 1.5 billion years in a solar system that was formed 4.56 billion years ago. Anja Andersen, an astrophysicist who studies cosmic dust and its role in the formation of the planets, wrote for “The Moon” catalogue. She explains that the prevailing hypothesis about the moon’s creation is that it resulted from a “massive impact between the earth and another planet. This planet, which has been given the name Theia, is thought to have been the size of Mars. The hypothesis is that Theia collided with a much earlier proto-Earth, hurling large chunks of the earth’s surface into a debris disc around the earth. This material later coalesced to form the moon,” (p 111).

Since the Soviet Union’s 1966 mission accomplished the first successful moon landing, 25 missions have done the same. Since Buzz Aldrin and Neil Armstrong took the first human steps on the moon, ten astronauts have also stepped on its surface. Laurie Anderson and Hsin-Chien Huang created a new VR piece for “The Moon” that takes viewers on a similar lunar mission. 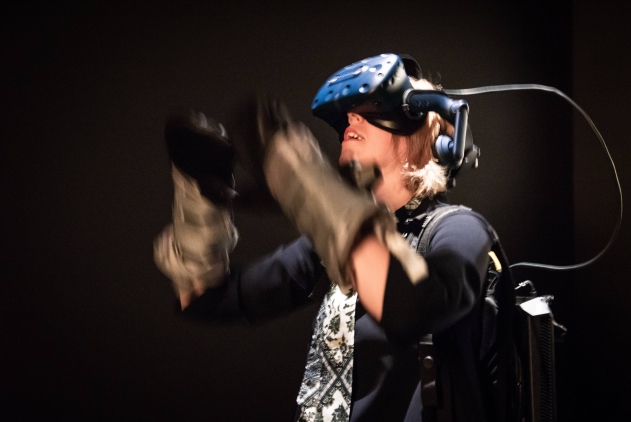 Anderson was NASA’s first artist in residence; she was there for three years beginning in 2003. In the VR piece “Moon,” a user floats across the surface looking at constellations. This is quite different from the way that astrophysicist Anja Andersen describes a walk on the moon. “It is especially difficult to avoid kicking the inside of your legs as you walk. If I wanted to look behind me I would have to turn my entire body, because the helmet limits the field of view. And I would have to be careful, because a fall could be fatal. The spacesuit would make it difficult to get up, and even a tiny rip could be the end of me,” (p 108).

Rachel Rose’s film EVERYTHING AND MORE (2015) is included in the exhibition. It features an interview that Rose did with retired NASA astronaut David Wolf about his space walk and experience spending 128 days in space. Wolf talks about weightlessness, and other sensations such as smelling Earth after his return. In the film, his voice resonates over images that Rose filmed in places including a Neutral Buoyancy Lab where astronauts train for weightlessness. Rose created a new edit of the video specific to the Louisiana’s gallery.

Sloan-supported artist Cath Le Couteur was also inspired by an astronaut to make her film piece, which is included in the exhibition. In 2006, NASA astronaut Piers Sellers went into space and accidently dropped a spatula over the side of the space shuttle. The spatula is now one of more than 100 million pieces of garbage in orbit around the earth. In Le Couteur’s PROJECT ADRIFT (2016) space garbage is imbued with personalities. Sally Potter (director of ORLANDO) voices a defunct solar-powered satellite.

In addition to the works mentioned above, “The Moon” at the Louisiana Museum of Modern Art features moving image works by Georges Méliès, Rosa Barba, Hito Steyerl, Malena Szlam, and Walt Disney. The exhibition is on view through January 20, 2019.