Jeffrey Wright On Hold The Dark And Acting With Wolves By Sonia Shechet Epstein | October 3, 2018

In the new mystery drama HOLD THE DARK, directed by Jeremy Saulnier (BLUE RUIN), Jeffrey Wright stars as nature writer and wolf expert Russell Core. Core journeys to a remote town in Alaska at the behest of Medora Stone (Riley Keough) whose child, she writes to him, has been killed by wolves. HOLD THE DARK is adapted by Macon Blair from a 2014 novel of the same name, written by William Giraldi. In addition to Wright and Keough, the film stars Alexander Skarsgård. It premiered at the Toronto International Film Festival, and debuted globally on Netflix on September 28. We sat down with Jeffrey Wright at the Crosby Street Hotel before the Netflix premiere.

Science & Film: How did your view of wolves change over the course of making this film?

Jeffrey Wright: My view of wolves was a positive one going into filming, and has only been further enhanced and my understanding deepened with the experience of making this film. I’ve always admired the wolf. I’ve leaned toward the canine in me at times; having grown up with dogs, my grandmother used to say, Jeffrey, why does every dog take to you? She said, dogs take to dogs, you know, which I took as a great compliment.

S&F: How did your understanding of wolves deepen while working on HOLD THE DARK?

JW: I stumbled onto a wolf sanctuary out in western Alberta, about two hours west of Banff, just prior to our filming. I went and took in as much as I could, bought a few books there, and also listened to the curators of this place. Then, of course, the wolves that showed up on set were further educators. What I was most surprised by though was how intensely playful they are. They use play and physicality as a means of organizing their social hierarchy. I wouldn’t say they are docile [laughs], but they are kind of lighthearted. Until they are not. They form what we condescendingly would call human bonds relative to one another. One of the things I discovered was howling properly.

S&F: I was very impressed by your howl in the film.

Wolves are fascinating. I was really surprised by the way the wolves interacted with me. I was a little bit nervous stepping into their space that first time. I was, you know, masquerading as a caribou. I wasn’t quite sure whether they could discern between this strange caribou and an actual appetizing caribou. To my surprise, they could discern and they were entirely freaked out by this weird, upright, quasi-human, quasi-caribou, speaking what sounded to them like English, toting a rifle with a scope, and they wanted nothing at all to do with that creature. They literally tried to hurry away from me as quickly as possible. [It] made filming them difficult, they were so bugged out. Wolves acclimatize very early to things that are familiar and familial and things that are on the outside of that; they had not been introduced to anything like that creature over the course of the first four months of their lives. So they were like, no, no, alien, bye. 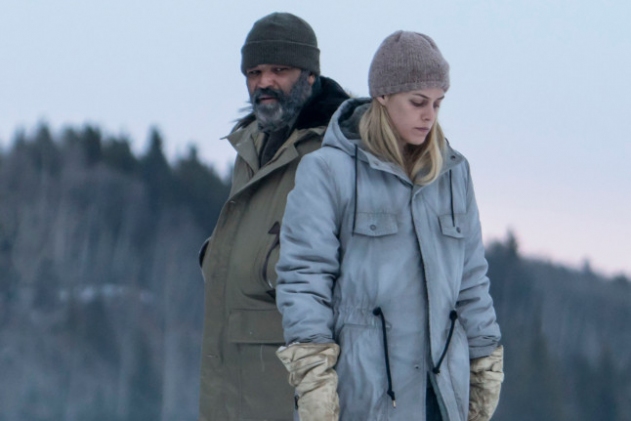 S&F: Can you tell me a little more about being on set with wolves?

JW: I would observe them and mostly they were on leashes—they weren’t just hanging out going to crafts service in between takes, you know. For the most part they were on leashes and the wranglers would come over and organize them and try to at least place them where they needed to be. Of course, there were times too when they were unleashed and just running like wolves. Some were wolves and some were wolf dogs. These wranglers have been with them since birth and have slept with them and all of the things that are necessary to bond with them. The wranglers had imprinted at a very early age and built up a sense of familiarity and trust, so in some ways the wranglers would play members of the pack and there was play exchanged between the wranglers and the wolves.

I remember looking up the hill at one of the wolves jumping up on his hind legs toward the nape of the neck of the wrangler and snapping his jaws, but this was fun for him. I just thought it was the funniest thing [laughs], that his idea of play might cost you an ear. You know? It was all loving as far as [the wolf] was concerned, but it looked pretty close to bloodshed.

S&F: Death and bonding sort of go together in the film.

JW: Yeah. At the beginning of this film I view Core in some ways as an ailing wolf who has nowhere else to go but off into the wilderness, perhaps to his end as an ailing wolf might. He strays away from the pack that’s been broken off, into something that seems noble but underneath it all his quest might be about something else too. I did try to conjure the old wolf in him to some degree.

S&F: How do you prepare to play a character with that sort of technical expertise?

JW: I try to read and experience as much as I can. It was fascinating to me. And, you’re weird to me if you don’t find these things interesting [laughs]. That’s part of the reason I was drawn to this film, because we don’t often see brown characters being capable of these things. We tend to view this type of work and these types of capacities through a more Eurocentric lens, through a more exclusivist lens. That is absolute rubbish and I love any time that I have the opportunity to shatter those biases that are reinforced quite often through cinema. I leap like a playful wolf at those chances.

I was also really appreciative that Jeremy [Saulnier] wanted to reshape the cultural aspects of the character as written in the book. Core finds himself [in a world] that’s overlain with indigenous peoples and culture and mysticism. It adds a very different dynamic that takes away, for lack of a better word, some colonialist dynamics, because Core is in this case someone like me.

HOLD THE DARK is now available for streaming on Netflix. It stars Jeffrey Wright, Alexander Skarsgård, Riley Keough, James Badge Dale, and Julian Black Antelope. Wright is an Emmy, Tony, and Golden Globe-winning actor who currently stars in HBO’s WESTWORLD as Bernard, and whose film career took off when he starred as Jean Michel Basquiat in Julian Schnabel’s 1996 biopic.