The animals that populate Swedish animator Niki Lindroth von Bahr’s THE BURDEN work tedious hours in commercial buildings on a rock in outer space. Perhaps the rock was once a city, and the freeway led somewhere. Perhaps there was a larger world, and the sun shown. Lindroth told Science & Film, when they spoke via Skype from her home in Sweden on June 15, that the rock’s inhabitants are animals who are byproducts of a human commercial industrial complex; rhesus monkeys work at a call center, mice at a fast food restaurant, a beagle stocks food in a supermarket, and threespine stickleback fish work at and reside in a hotel. Beautifully rendered, each of these four species of animals is used in the real world by humans in research experiments.

THE BURDEN, a 14-minute stop-motion film, is a tender, highly choreographed musical with notes of despair that turn cheerful when a black hole emerges in the supermarket. The burden of life these animals bear might soon be lifted.

Science & Film: How did the idea for THE BURDEN come about, and did it always star animals?

Niki Lindroth von Bahr: I have made three different animated short films and all of them star animals instead of humans. But they are human-like animals. I enjoy thinking of my films a bit like some kind of modern fable; in traditional fables you tell one kind of story but with a cute animal filter on the actual meaning. Also, to be totally honest, I’m kind of terrified of human puppets. I just feel that it’s too “uncanny valley.” 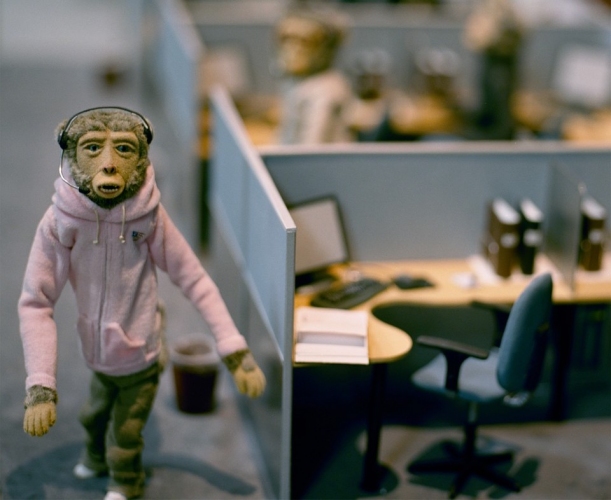 S&F: How did you choose which animals you would feature?

NLvB: For THE BURDEN, I chose to work with animal species that are very often used in medical experiments. This is not something that you’re supposed to understand from seeing the film, it’s just something I do for myself. I just think that it adds something for me. If anyone asks, maybe it adds something for them—adds some meaning for the story, or not. The stickleback fish is very commonly used in medical experiments. It’s a very small and quite common fish, and I had no idea that it was so often used in experiments. I had to do a lot of very unpleasant research on the subject.

S&F: So these animals are in your film subject to consumer society, but then in real life these are animals that are also subjects; they are in a human system without their own agency.

NLvB: Exactly. Also, I wanted to speak about low-paid work and these really boring jobs that so many of us need to do. Like these animals are slaves to this pointless system.

S&F: What about for your other films like BATH HOUSE—how did you choose those animals?

NLvB: BATH HOUSE takes place in a very generic and clean public bath house, but stars animals species that are very recently extinct. When you visit natural history museums in different parts of the world you usually see old stuffed animals that no longer exist, and maybe they were stuffed in the ’30s when we didn’t really know what they looked like, so they look a bit weird and very dusty, and basically it is a forgotten animal. When you realize that there are so many animals that are now gone, without you even knowing they existed, that’s kind of sad and interesting. I was very inspired by those kind of animals when I made BATH HOUSE. 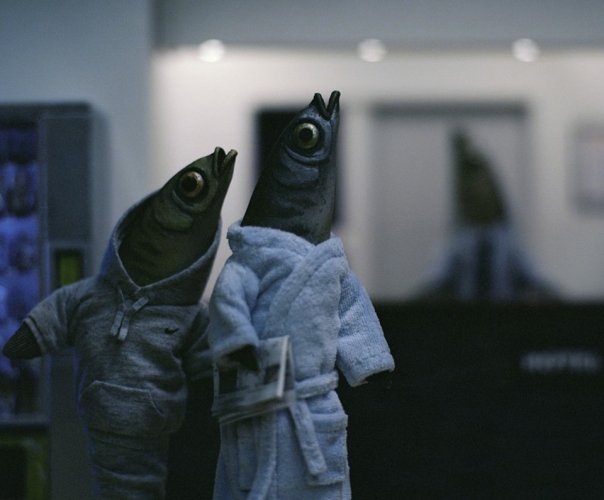 S&F: You compared THE BURDEN to a fable earlier. Fables often have a moral. Did you think of a moral for THE BURDEN?

NLvB: I’d say that THE BURDEN is to me quite straight in what it wants to tell compared to my previous films, which are a bit more vague. This is the most political story I’ve told in this kind of straightforward way.

S&F: I really love all the singing in the film. Is that something you often do in your films, or how did you come up with that idea?

NLvB: No actually, this is the first film where I’ve used music like this. In my previous films I’ve been working a lot with silence and I tend to think that music is very over-used in films in general. I think it can be quite problematic to use too much music to force the audience into certain feelings—sometimes it doesn’t work smoothly and you get kind of annoyed. That pointless music has bothered me a lot so I’ve often used silence. But for THE BURDEN I wanted to use music because I really love old Hollywood musicals. I loved Gene Kelly and Fred Astaire musicals growing up. So I felt I should do some kind of tribute to that genre but also of course adding some darkness.

S&F: Yeah, this certainly has a very different tone.

NLvB: Haha. It would be so uninteresting if it was too cheerful. I decided to go all in with the music. I worked together with Hans Appelqvist who is a Swedish composer and artist. His own music is much more art house; it’s super, super good but also a bit more weird, you know? So I felt it would be so interesting to ask him to use his style but also be very inspired by WEST SIDE STORY or SINGIN’ IN THE RAIN and such films.

I gave him instructions: like this is a tap dance scene, this is a Busby Berkeley inspired dance scene, this is much more mellow. And he composed fantastic music. I’m so grateful for that. We also kind of killed the budget from day one. We had a super tiny budget for this film from the beginning and I decided to record this music with a live orchestra of 15 people and that was so expensive. But to get this authentic sound design that makes you think of musicals I felt that was very important. I have no regrets. 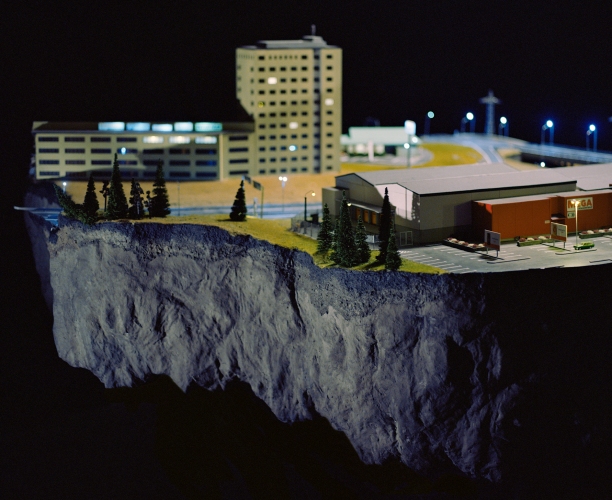 S&F: How long did it take you to make this film? Animation is a very intensive process.

NLvB: I really don’t know how I got around; it’s still a mystery. But I do sculpture and sometimes costume design for music videos and stuff like that. I was lucky to get a few bigger jobs.

THE BURDEN is written, directed, photographed, and animated by Niki Lindroth von Bahr. The animals are voiced by Olof Wretling, Mattias Fransson, Carl Englén, and Sven Björklund. Rooftop Films gave a grant to support the production of THE BURDEN. von Bahr’s other films include BATH HOUSE (2014) and TORD AND TORD (2010) which have been screened at festivals around the world. She is represented as an artist by Stene Projects Gallery and as a director by Nexus.

[Editor’s Note: The four animal species featured in THE BURDEN are subjects for medical or scientific research. Generally speaking, beagles are used by the pharmaceutical industry and cosmetic companies as test subjects for new products. Rhesus monkeys have had cognitive skills tested by primatologists and biologists, and are common subjects for a range of scientific experiments. Mice are often used for medical testing and in behavioral experiments. The entire genome of the threespine stickleback has been sequenced, and so the fish is often used to study evolution. For more, read neuroscientist Danbee Kim’s op-ed on the website Massive about animal testing.]