Award-winning writer Cynthia Lowen’s directorial debut NETIZENS shows the harm that vitriolic online actions can have when the victims are away from the keyboard. The documentary focuses on three women: lawyer Carrie Goldberg who specializes in cases at the intersection of internet privacy and sexual assault, feminist media critic Anita Sarkeesian, and a woman who was forced to give up her career ambitions after an ex-boyfriend created fake websites that appeared every time she was Googled. NETIZENS made its world premiere at the 2018 Tribeca Film Festival. Science & Film spoke with Cynthia Lowen who, in addition to directing, wrote and produced the film.

Science & Film: How did you want to change the general perception of the Internet with this film?

Cynthia Lowen: A lot of people who are targets [of online harassment] will call law enforcement and the officer who shows up will say: just log off, turn off your computer. As if that would make the problem go away. So one of my goals with the film was, through a verité approach to the subject matter, to spend time with women who are impacted [by online harassment] and just see how this affects their relationships, their personal safety, their education. They can’t get a job, they can’t make money, they end up taking positions that are way underneath the schooling that they’ve had, they have to leave their homes. I really wanted to break on this idea that it’s “just the internet,” and show that the Internet right now is maybe the most important public space in our communities.

I think if we see the Internet as a more concrete place, not just as an abstraction, it will compel us to demand more of law enforcement and of the site operators to make sure that their platforms aren’t rife with abuse. Like what we’re seeing with Facebook right now: they know their platforms are being abused but they haven’t been compelled to do anything about it, until a real public outcry happened about how it’s affecting the fabric of our culture. 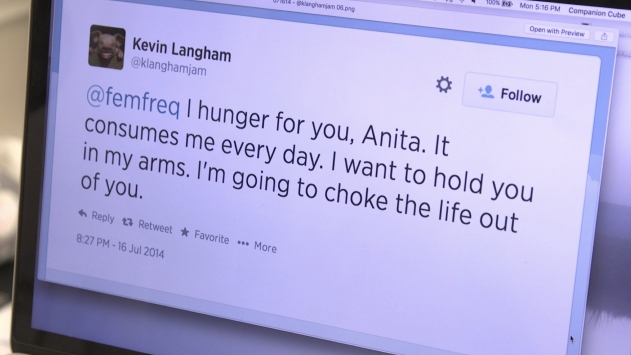 An example of a sexually threatening tweet. Courtesy of Train of Thought Productions.

S&F: One of the most affecting moments in the film for me was when one of the women you follow was speaking with a man who was trying to convince her that the threats and harassment she was getting online would only affect her if she let them.

CL: We kind of laugh because nothing good has ever followed the statement: it might be just because I’m a guy. Whatever it was, maybe keep it to yourself. Sure, Tina can turn her computer off but [the fake websites are] still going to come up every time she tries to get a job and someone Googles her.

S&F: There is a larger issue that comes up in the film about the information that tech companies are gathering on their users that can be accessed by others, such as location services. You don’t get into tech policy too directly in the film, but did you at any point think you might?

CL: Yeah. Multiple times I invited every major tech company to participate in the film. I had conversations with Facebook, Google, Twitter, Reddit, and Microsoft. I even reached out to 8chan. I invited them to be in the film and tried to say: you’re part of this, I want to hear from you, I’m sure it is complicated when you’re dealing with billions of users–in the case of Facebook–from different cultures and languages and contexts, and I’m sure your job is incredibly challenging. I was hoping that they would participate in the film itself, but they declined to be interviewed on camera for the film. Most of the companies spoke to me on background. It is my hope that they will be engaged in the outreach and impact campaign that we’re gathering for the film. I hope that they will take meaningful steps to use the film as a tool in their own work, and that the film will be part of the social forces that are compelling these companies to finally start doing something. 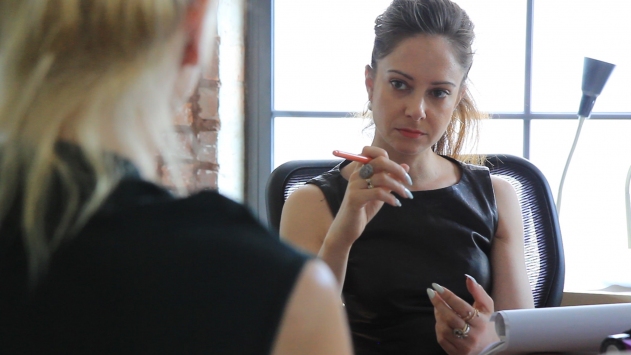 Sexual assault attorney Carrie Goldberg in her office with a client. Courtesy of Train of Thought Productions.

S&F: Have any of them responded in any formal or informal way to seeing film?

CL: Yeah, actually Jacqueline Beauchere from Microsoft, who is the Chief Online Safety Officer, came to our screening and sent a really positive note. Microsoft also launched a campaign that she spearheaded called the Microsoft Digital Civility Campaign. I think Microsoft is doing a lot and they’re taking this seriously.

S&F: The political landscape has changed so much since you started making NETIZENS two and a half years ago. How has that affected the way you speak about the film?

CL: The last shoots I did were this winter as the Me Too movement was growing. The power of women’s voices and collective action online is changing our world. It’s a great example of what can happen when women are empowered to gather, express themselves, and use the internet as a tool for change. That was something I felt that I really wanted to film.

Last week it was mind boggling to hear Congress take Mark Zuckerberg to task about why hate speech is allowed on Facebook. Up until now I think [Facebook has been] allowing violent speech that was curtailing other people’s ability to use their free speech; the tables have suddenly turned. It’s very interesting. Backpage being shut down for sex trafficking is a huge development. Backpage has been a huge aggressive fighting any kind of policy that would take away their immunity from liability. All of these site operators enjoy immunity from liability, which is why they generally have no reason to be compelled to do anything about abuse and threats on their platforms. But Backpage losing their immunity, and Craigslist making changes to their platform to avoid the possibility of the same thing happening, is really profound change.

S&F: Who were the most important people you spoke with while making this film who helped you understand these issues?

CL: I spoke with a lot of incredible people who have been doing work in this arena for so long and are pioneers. Danielle Citron who wrote Hate Crimes in Cyberspace is in the film and is one of the important thinkers whose book I read to understand how we think about civil rights in online spaces. Daniel Solove is another pioneer, and Mary Anne Franks. Elisa D’Amico who is an attorney in Florida. Carrie Goldberg [sexual assault lawyer], of course, who is in the film. All these people who have created the field for how we are legislating and providing justice on the Internet.

S&F: How have the premiere screenings been at Tribeca?

CL: All of the screenings have been great. I think everybody’s championing these women. The [audience] questions are often about how there is not more protection. We’re all so vulnerable and everyone gets it. NETIZENS is a film about women, and a film that men respond to as well. They may not have the same level of physical threat but they are also super vulnerable to someone waking up one morning and using the Internet to harm their careers or threaten them or their families.

NETIZENS had its international premiere at HOT DOCS in Toronto where it was shown for an audience of 600 high school students with an education program. In addition to her work on NETIZENS, Cynthia Lowen is writer and producer of the documentary BULLY, about bullying in America, which was nominated for two Emmy awards.

For more, read the piece about Dave Eggers’ The Circle that Science & Film commissioned from law professor Danielle Citron, who is featured in NETIZENS.