In two-time Academy Award nominated filmmaker Don Hertzfeldt’s new film WORLD OF TOMORROW EPISODE TWO: THE BURDEN OF OTHER PEOPLE’S THOUGHTS, stick figures raise existential questions about what it means to be human. Emily, voiced by Hertzfeldt’s five-year-old niece Winona Mae, is visited by six generations of clones of clones of herself. Emilys 1 through 6 have portable neural networks that are supposed to have replicated Emily’s brain, complete with her memories, but instead have gaps and glitches. The clones visit their ancestor Emily-Prime, still a kid, as tourists hoping to fill in those gaps. “If there is a soul, it is equal in all living things,” Emily-6 tells Emily Prime–rather than ceding primacy to Emily Prime’s memories, Hertzfeldt celebrates moments of experience between the characters.

Bittersweet, WORLD OF TOMORROW EPISODE TWO was written by Hertzfeldt around interviews with his niece, as was the first WORLD OF TOMORROW (when Mae was four-years-old). The Emily clones are voiced perfectly, statically by animator Julia Pott.

EPISODE TWO (running 22 minutes) was selected for the 2018 Sundance Film Festival, where it will screen on January 18. Meanwhile, the film is available directly from Hertzfeldt via Vimeo. Science & Film interviewed Hertzfeldt on email before the film’s Sundance premiere.

Science & Film: The language in WORLD OF TOMORROW EPISODE TWO indicates some familiarity with artificial intelligence. Emily-6 mentions a neural network, and she is also concerned with consciousness. Does any of the literature or discussions around AI inspire you?

Don Hertzfeldt: sure, i think maybe the most direct thing was something i read when i was a teenager. i remember some article about AI and it was going on about how understanding the way computers operate and "think" was changing the way we understood neuroscience, and how our own brains think. and i remember reading this classic phrase, "after all, the human brain is just a computer made of meat." and whether or not that's even remotely accurate, it's spooky and interesting enough to have really stuck with me over the years. so much of "world of tomorrow" is that one little weird theory, and a few others, taken to really over-the-top places. non-fiction is usually where i find the best little threads of inspiration like that–you don't need very much. 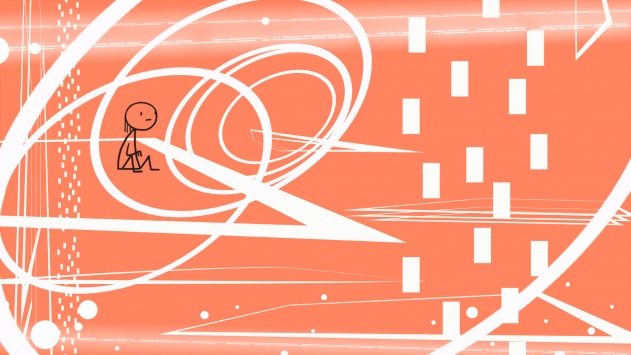 S&F: To what extent do you plot out the logic of the world that you've created?

DH: i only plot out the logic a few steps further than the narrative needs to explore it. i haven't been doing a lot of behind-the-scenes “star trek” universe building. one of the classic cheats about science fiction writing is you can create all the machinery without needing to understand how all the machinery actually works. "this is a time machine. look, i have no idea how this time machine operates, just accept that it's a time machine."

S&F: One of the questions that your film seems to ask is, what does it mean to be human? This is a question typically taken up by the science fiction genre. Does working in animation, with stick figures, affect how you think about that question?

DH: animation obviously opens things up and allows you to go places you couldn't have gone in live action (or at least couldn't have afforded to go), and it also allows me to steal my niece's voice. but, i think i've long ago stopped consciously writing in terms of animation. the fact of something being animated is usually the least interesting part to me in anyone's movie. but i think i've always felt like a live-action filmmaker who just happens to draw. i've been animating everything for over twenty years, so presenting a story that way has just sort of become second-nature to me now. the main concern going through my head in every aspect of production is the writing: how can i improve the writing, what's wrong with the writing, is there anything more to fix with the writing? animation is just how i'm able to deliver it. 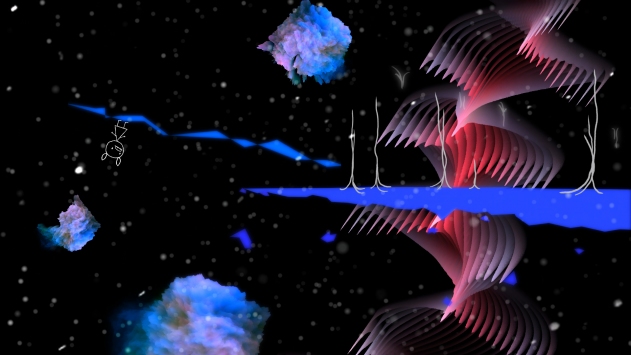 S&F: One scene that I find hilarious is when the clones are visiting an aged Emily Prime and she asks them to leave while they're in the midst of theorizing about memories. Emily Prime's statement is so relatable, even in this bizarre scenario. Can you talk a bit about that dynamic between the Emily clones and Emily Prime?

DH: i tried to approach them like a group of squabbling sisters with different personalities. they're all clones, but have just enough glitches from the copying process to make them a little unique. we don't spend a lot of time with them in the movie so most of those subtleties in character had to come from julia's great vocal performance: this one's real sensitive, this one's sort of a bully, that one's the leader, etc. and as memory tourists, we just strove to make them the most intrusive, horrible tourists they could be. i wanted to write about people who are compelled to capture, catalogue, and overshare every moment; hoping to better understand them on some level, but oblivious to the fact that they are, at the same time, ruining those moments. and meanwhile, being so wrapped up in the constant virtual memories of others that they're not fully experiencing their own lives. i think about this sort of thing a lot when i see someone standing in the front row at a concert watching it all through their phone.

S&F: The music selections are surprising and wonderful. How did you approach the sound design?

DH: i've been doing my own sound design now for over a decade and i love it. sound's always been my favorite part of the whole process. unlike a live action movie where you've got sound and dialogue coming from a set, most of the time an animated piece like this is a totally silent film until the last stage of production. for something like "world of tomorrow," you've only got some threads of dialogue to listen to as you're building it all. so sound has always been this monstrous miracle that only enters the production after 90% of the work, sometimes years of animation, has already been completed. and it's not until i start mixing sound and bringing music into the scenes that, my god, suddenly this is a movie. it was this series of scenes for so long and suddenly there's emotion, and connective tissue, and it actually feels like a movie.

WORLD OF TOMORROW EPISDOE TWO: THE BURDEN OF OTHER PEOPLE’S THOUGHTS, is available on Vimeo. Rolling Stone ranked it #10 on its list of the "Greatest Animated Movies Ever." WORLD OF TOMORROW, which also stars Emily Prime, is currently streaming on Netflix. Don Hertzfeldt’s other award-winning animated films include IT'S SUCH A BEAUTIFUL DAY, THE MEANING OF LIFE, and REJECTED. Hertzfeldt’s films have won over 150 awards at film festivals around the world. He is the only filmmaker to have twice won the Grand Jury Prize for a Short Film at Sundance.