Pioneering filmmaker and visual artist Lynn Hershman Leeson wrote, “one of the advantages of using materials of the present is that it creates a contemporary dialogue, rather than competing with history.” Leeson’s feature films include the Sloan-supported film TEKNOLUST (1990) starring Tilda Swinton as a biogeneticist and her three replicants. Accompanying the film is a web project in which users can chat with a character from the film named Ruby–the chat bot’s programming allows it to develop its own language skills, using more complex constructions, learning from each user interaction. Leeson’s newest art installation “VertiGhost” uses surveillance technologies and 3D printing to place viewers in dialogue with Alfred Hitchcock’s masterpiece VERTIGO (1958). Kim Novak stars as Judy, a woman who is pretending to be Madeleine, a woman haunted by the ghost of her grandmother Carlotta. In repeated scenes of VERTIGO, Judy/Madeleine sit in front of a “Portrait of Carlotta” at the Legion of Honor.

Leeson’s “VertiGhost” was commissioned by a new Contemporary Art Program at the Fine Arts Museums of San Francisco. The stipulation is that the commissioned work engages in some way with the Museum, whose buildings include the de Young Museum and the Legion of Honor. “VertiGhost” is installed in both spaces as well as online. The web platform streams scenes from VERTIGO which Leeson recreated using Kim Novak lookalikes. When viewers sit down in front of the “Portrait of Carlotta” at the Legion of Honor (the painting doesn’t actually exist–Leeson found Hitchcock’s original set piece and scanned it to make a blurry copy), the painting looks back at them with cameras behind its eyes. Viewers are then superimposed onto the scenes from the film that Leeson shot.

“VertiGhost” is on view through March 25. This is one of the many projects on which Leeson is currently working. In March of 2018, the pharmaceutical company Novartis will complete development of an antibody named for her.

After “VertiGhost” opened in December of 2017, Science & Film sat down with Leeson in New York.

Science & Film: Why did you choose VERTIGO as the subject of this commission?

Lynn Hershman Leeson: It occurred to me that this great film was shot at the Legion of Honor and the same bench [from scenes central to VERTIGO] remained in the gallery. Why not use that architecture and film history? Essentially every visitor to the Museum who sat on that bench was re-performing Kim Novak’s role as Madeleine. I was really lucky nobody thought of it before.

S&F: Can you talk about the technology you used to create “VertiGhost”?

LHL: It’s so easy. It starts with going into the gallery room, because everything is identical [to when Hitchcock filmed there in 1958]. In a corner of the gallery, I put a mirror with a value sign on it that reflects a manikin with Madeleine’s clothes on it. The whole installation is about mirroring, value, artificiality, and twins. You sit down on a bench in front of my version of the Carlotta painting, which I blurred because it was more interesting, like blurring the truth of surveillance. Hidden in flowers [on the bench] is a 3D-printed sensor that looks like a leaf. 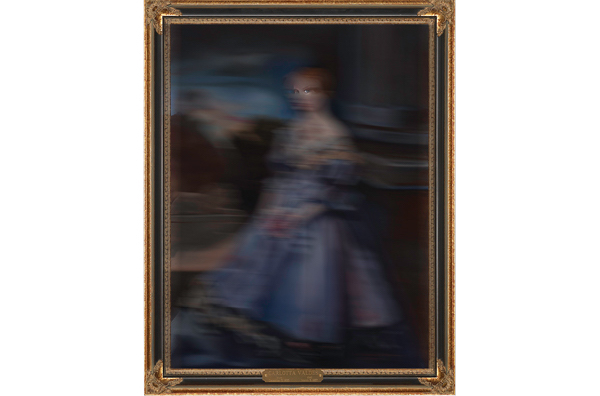 LHL: It’s really awful. We photographed the original prop that Hitchcock used, then blurred it in Photoshop, and printed it the same size on plexiglas. We then built the frame and a second stage camera to hinge in the back of it, so it sees through Carlotta’s eyes. Sitting down on the bench in front of the painting activates the sensors which activates cameras in the Carlotta painting. Then, the camera captures your image and superimposes it into 16 scenes that we shot of VERTIGO which are streaming on a monitor in the de Young Museum and at the Legion of Honor, like a Pepper’s Ghost box. So you become a character. When a viewer is sitting they go into sitting scenes and when they’re standing they go into standing scenes.

S&F: It’s a constant loop. So if no one is sitting there, what happens?

LHL: It just loops with actors. In order to get Kim Novak look-alikes I put a call on Facebook for anyone who looked like Kim Novak. Then a 19-year-old composer recomposed the whole VERTIGO score.

S&F: Some of the technologies that you use, like the camera, are often used in surveillance. Was that intentional?

LHL: Yes, because I think it takes it to a second level. I wanted to do something that wasn’t just in one museum but was in the entire museum–two locations. I can’t imagine doing anything that doesn’t have surveillance in one way or another; it seems so much of a part of what’s going on. There is even biological surveillance, tracking your DNA to go back to the history of trauma.

For my installation “The Infinity Engine” [an installation that is a functional replica of a genetics lab], I interviewed a geneticist who is working on correcting DNA trauma in embryos. They’ve gotten permission in England to operate on humans. 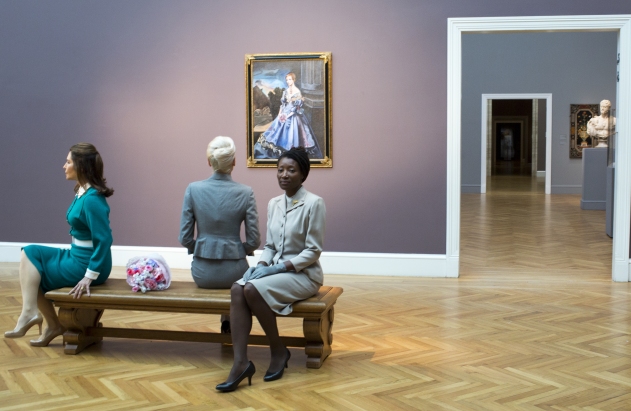 S&F: Does such a technology make you nervous?

LHL: I think it’s really fascinating. It’s not technology that creates dystopian or utopian elements of the future–it’s really what we as a species do. If we can correct something in an unborn fetus so they can live a life without being dependent on chemicals, then that could be liberating for them.

S&F: One of the things that I love about work that deals with science or technology, yours included of course, is that it gives people a space to think about these technologies that have moral and ethical implications.

LHL: [These biotech companies] all have to employ ethicists–a team of people who critique what they’re doing, so that is a big change. Of course, the ethicists are being paid by these places too.

S&F: That seems like that would be an issue. I know there is an organization partly responsible for monitoring ethics around Artificial Intelligence, but many of the people on it are themselves inventing AI.

LHL: Maybe they should make an AI ethics bot.

S&F: As long as they get someone else to program it.

LHL: It could program itself. You heard about those bots that started to encrypt their own language?

LHL: A few changed the language so that humans could not understand what they were saying. I think science is magic. I think art is magic too because you’re putting things together to see what happens. The difference is scientists have to prove their work. My daughter is a scientist, an M.D., but I don’t think she gives much credibility to my work about science. I say, they’re making a Lynn Hershman antibody and she says, yeah yeah.

S&F: One day she’ll say something different; once the antibody cures cancer or something. That’s funny. Where is your daughter?

LHL: Everyone is using DNA as an archival means. I want to use DNA as a source for a new creative medium.

S&F: Has anyone done that?

LHL: No. The only people who’ve done it are Microsoft and Harvard. Technicolor archived VOYAGE TO THE MOON on DNA. I think some jazz festivals are putting their archives on DNA. All these places are doing it so the data can last longer than the planet, but not as a source for a new media or the core of a narrative.

S&F: A little bit like what you did with Agent Ruby and TEKNOLUST?

LHL: Exactly. But Ruby came first. I had to do the film to make Ruby.

S&F: Do you want to go back to making fiction films?

LHL: I’ve been making these works that I can do for nothing, basically. They’re ridiculously inexpensive. I had to invent a way to do something that didn’t cost anything. I don’t want to go back into debt and films are expensive. I almost had to declare bankruptcy after TEKNOLUST. However, I’ve been trying to make a part three to the TEKNOLUST trilogy.

In fact, I have a script that Barry Jenkins [writer and director of MOONLIGHT] and I wrote in 2011. Well-known actors had agreed to be in it. Originally, I wanted to do something with the same actress who you would see age through the trilogy. I’m not sure Tilda [Swinton] is so keen on doing it but she said she would play the cat. I’ll have to update the script.

S&F: The trilogy is TEKNOLUST and what else?

LHL: CONCEIVING ADA is before that. How do you make a film like that for $30,000? If you have somebody in bed all the time and do the backgrounds in blue screen.

S&F: Out of constraints come creativity.

Lynn Hershman Leeson is a filmmaker and multimedia artist whose work has been in over 200 large-scale exhibitions around the world and film festivals including Sundance, Toronto, and Berlin. The first comprehensive exhibition of Leeson’s work, Civic Radar, was exhibited at the ZKM in Frankfurt, Germany in 2015. Her feature film TEKNOLUST was the inaugural program in the Museum of the Moving Image’s Science on Screen series. Leeson’s multi-room installation “The Infinity Engine” will be exhibited at the H+K Center in Basel in March of 2018, and then at the Riga International Biennial of Contemporary Art in June. If all goes smoothly at Novartis, the Lynnhershman antibody will be on display as well.

“VertiGhost” is on view at the Legion of Honor and the de Young Museums in San Francisco through March 25, 2018.