The new time-travel comedy FUTURE ’38 is set up as a screening of a film made in 1938 about people from that year travelling to 2018–the 1938 vision of 2018 spoofs today’s technological reality. Text messages are communicated via people instead of electronics. Television screens have live operators ready to dial at request. The film won the Audience Award at the 2017 Slamdance Film Festival. It stars Betty Gilpin (GLOW), Nick Westrate (RICKI AND THE FLASH), and Sean Young (BLADE RUNNER). Neil deGrasse Tyson (COSMOS) has a cameo at the beginning. On January 2, the film will be released on digital platforms. Writer, editor, and director Jamie Greenberg (STAGS) sat down with Science & Film at the Museum of the Moving Image the day that FUTURE ’38 opened at Videology theater in Brooklyn.

Science & Film: How did your idea for the premise of FUTURE ’38 develop?

Jamie Greenberg: I’ve always been interested in history. I worked on an education game show for children called WHERE IN TIME IS CARMEN SANDIEGO?, which is a sequel to the better-known WHERE IN THE WORLD IS CARMEN SANDIEGO?. We did five seasons of WHERE IN THE WORLD and two seasons–115 episodes–of WHERE IN TIME. I was constantly writing history clues so reading interesting historical facts left, right, and center. A couple of them stuck in my mind including oddball historical event from the Cold War. I thought I would make it into a movie.

Maybe because I have a background as a writer in history, and I started in game shows as a researcher checking facts, that conflicted with my impulse to write fiction, and I couldn’t figure out how firmly rooted in real history I wanted the film to be. On the one hand, there are movies that are very historical, like GOOD NIGHT AND GOOD LUCK about broadcast news. On the other hand there are movies like COOL RUNNINGS about a Jamaican bobsled team, which was rooted in reality only in that there was a Jamaican bobsled team. Somewhere along the way, in trying to walk that line, I just lost my bearings and spent a year researching the damn thing. I thought that there had to be something more fun than this particular project; not that on its merits it wasn’t fun, just that I had gone down this bad wormhole with it. 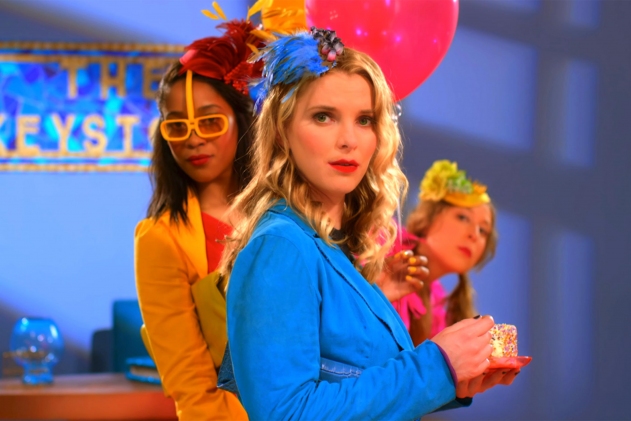 S&F: Was the issue that you were feeling like you had to get everything right?

JG: That was the problem. I couldn’t decide whether I needed to get it all right or just say, such and such a thing happened, then make up all the rest. In retrospect I think what I was doing was putting off those decisions by finding another book, or going to the Smithsonian.

JG: That’s the other thing: I really like research. It just started to feel like I was not making progress. So I thought, what would be fun, sexy, and goofy to write? Time travel. Take SLEEPER–part of the charm is that the future looks so ’60s, and I find charming and so interesting that idea of future’s past. 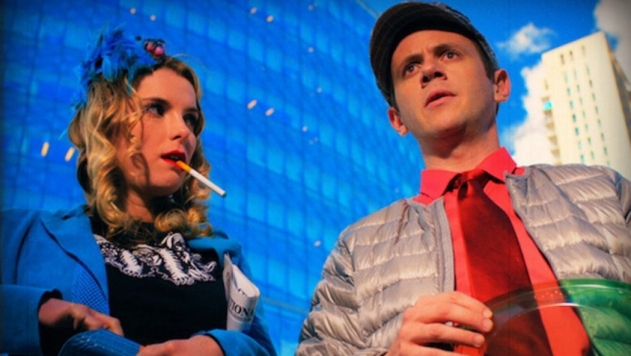 S&F: Were you daunted by the thought of making a movie set in the future which typically requires a big budget?

JG: When I write, I write with an eye toward making the film, which means ultralow budget. So, how do you make a movie about the future when you don’t have the money to pay for the art direction, space cars, clothing, and technology? How do you square that circle? By the way, that would have been the problem with making a film set in the past as well. But, I had a moment where I thought: oh my god, I have this computer, satellite, world navigator, access to all the information in the world in my pocket. Look at the crazy TV screen on my wall. What’s a way to shoot in our world and treat it as the future? My answer was to write it from the perspective of 80 years ago. How would people in the 1930s envision today?

S&F: Can you describe the set?

JG: We were so low budget that everything was extraordinarily low tech. There was a young woman on our staff who happened to be very petite so we had her inside the box of the computer–in the scene, she is all scrunched up in this damn cardboard box and when the two actors are punching the computer buttons she’s basically feeding out ticker tape [the result of their search query].

S&F: Aside from technological advances, did you think about how social relations might change in the future?

JG: It’s a whimsical, lighthearted movie, and if it deals with any great themes it does so in a fairly glancing way, but I tried to address a little bit of that. This future world of 2018 as imagined by filmmakers in the ’30s is a world in which gay marriage has been legal for decades, and it’s also a world where it is completely normal for women to have careers, which from a 1938 perspective was not normal. 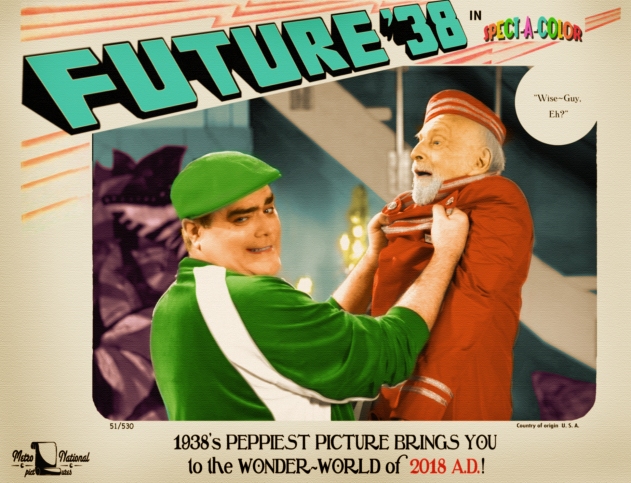 S&F: How did Neil deGrasse Tyson respond to being a part of the film?

JG: We shot all the principal photography before we decided who would be doing the introduction. The same goes for Sean Young [BLADE RUNNER, DUNE] who plays the operator. Robert Miller who scored the movie scores the planetarium shows at the Museum of Natural History which Neil deGrasse Tyson provides the voice for. So we were able to work with him. He was incredibly gracious and fun.

S&F: Would you make a science film again?

FUTURE ’38 is written, directed, and edited by Jamie Greenberg. Daryl Goldberg and Joanna Bowzer produced. The film will be released digitally beginning January 2, 2018. 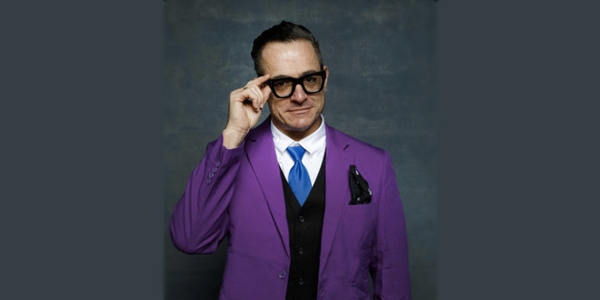 Jamie Greenberg is a writer, director, and actor. He has made a number of shorts, a web series, and FUTURE ’38 is his second feature film. Greenberg co-created the PBS show WHERE IN TIME IS CARMEN SANDIEGO?, for which he was nominated for two Emmys, and he wrote five seasons of the predecessor show WHERE IN THE WORLD IS CAMEN SANDIEGO?.