Set in County Donegal, Ireland during the summer of 1878 when the Irish independence from Britain was iminent, Brial Friel’s play THE HOME PLACE deftly addresses social, political, and economic tensions. The play is making its New York premiere at the Irish Repertory Theatre. THE HOME PLACE, written by Friel (PHILADELPHIA) in 2005, is his last work.

In the play, a British landowner named Christopher Gore employs the daughter of a local schoolteacher to run his house. They are visited by Gore’s cousin, Richard, who is an ethnographer; Dr. Gore’s visit brings to the fore tensions between the British and Irish, the rich and poor, that imbue every interaction. Dr. Gore is interested in phrenology and craniology, and tries to measure locals’ heads and bodies and use those measurements to make assertions about temperament, and other personality features.

THE HOME PLACE is directed by Tony Award-nominee Charlotte Moore, who has directed seven of Friel’s earlier plays. Moore is co-founder and artistic director of the Irish Repertory Theatre. She and Science & Film spoke by phone on October 12, two days after the play opened.

Science & Film: How do you think about the scientist’s role in the social structure of the characters in THE HOME PLACE?

Charlotte Moore: In my research about the character of Dr. Richard Gore, I realized that I knew very little about Charles Darwin. I read a bit, including some of On Origin of Species. I paid attention to the fact that Darwin was English, and was born in 1809 and died in 1882 so he was right in the forefront of research during the time that the play is set, in 1878. I think Dr. Gore, the Englishman, was prone to stuffiness and thinking the Irish were inferior and jumped on Darwin’s ideas. 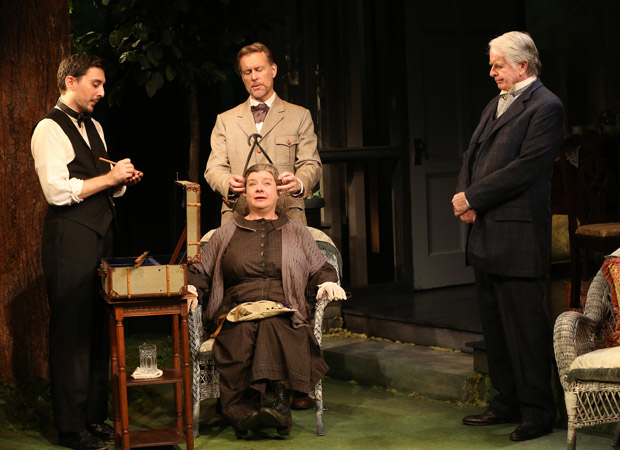 S&F: What did you think about the character of the scientist’s assistant?

CM: Probably he is just a notch below the social status of Dr. Gore, and I think he is probably a notch below in Dr. Gore’s educational status. He is a leech. I really don’t like him. He shows affection for objects and ideas that he has learned second hand.

S&F: Did you ever talk to Brian Friel or read anything that he wrote about how he got the idea to include scientists in his story?

CM: I don’t know. But I have also done a Brian Friel play called MOLLY SWEENEY about a woman who is blind from birth and who had surgery to restore her sight. When her sight is restored, the character can’t take the sighted world and dies with her blindness restored. So Brian had a leaning toward scientific theories that were very dramatic. His plays are full of that. I think he loved reading science books because there are touches of it in a lot of his plays including THE HOME PLACE. He seemed compelled to back up his drama with real theory.

S&F: Did you research the instruments used in the play?

CM: Researching them was fun. I found a place in Ireland where they had those instruments from the time, and I had couple of them sent over for us to reproduce. So they are authentic.

S&F: Why did you want to produce this play now?

CM: It is Brian Friel’s last play; I have done seven of his other plays and am kind of a devotee of his work. This one had not been done. Somebody else had the rights actually, I envied them, and all at once they let the rights lapse and I jumped right in and got them. I wanted to do it because of history, background, and admiration. I knew Brian a bit and adored him and am so delighted to be doing his last play when nobody else in New York has done it. I am just thrilled to be doing it and thrilled to be doing it with this first-rate cast. I’m very proud of it. 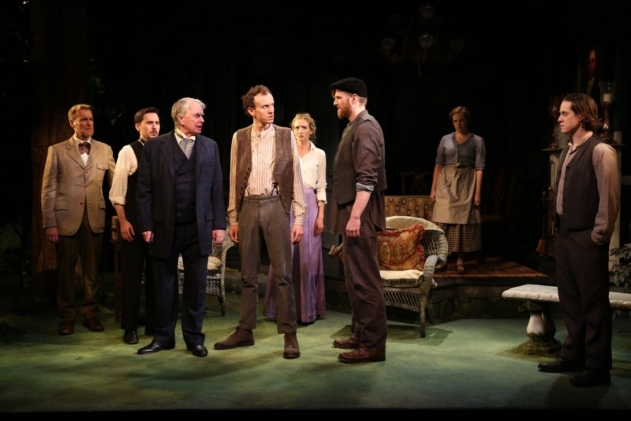 S&F: Do you imagine that the production plays differently now than when it was produced in 2005?

CM: Yes. Politics is so on people’s minds lately with the situation in our country, and Brexit in England, and the anniversaries of the revolution in Ireland, that it is hard to get away and I enjoy it anyway, so it seemed to me especially relevant.

THE HOME PLACE, by Brian Friel, directed by Charlotte Moore, is playing at the Irish Repertory Theatre in Manhattan through November 19. It stars Margaret O’Donnell, Johnny Hopkins, Ed Malone, Andrea Lynn Green, Stephen Pilkington, and Christopher Randolph. The play was previously produced in 2005 at the Gate Theatre in Dublin, and in 2007 at the Guthrie Theatre in Minneapolis.