Except at the George Eastman Museum’s annual Nitrate Picture Show, nitrate films–which can ignite at 100 degrees Fahrenheit–are almost never projected. For 33 years George Willeman has been managing over 100 covert nitrate vaults at The Library of Congress. For years, Willeman has kept an eye out for nitrate films which he can save for documentarian Bill Morrison.

Morrison travels to the nitrate vault at least once a year to try “and find interesting examples where the nitrate has interacted with the image in a way that I find compelling,” he told Science & Film. Morrison’s latest film, DAWSON CITY: FROZEN TIME is composed of found silent nitrate films discovered in Dawson City, Canada in the 1970s. FROZEN TIME will by shown at the Museum of the Moving Image with Morrison in person from August 18 to 20. 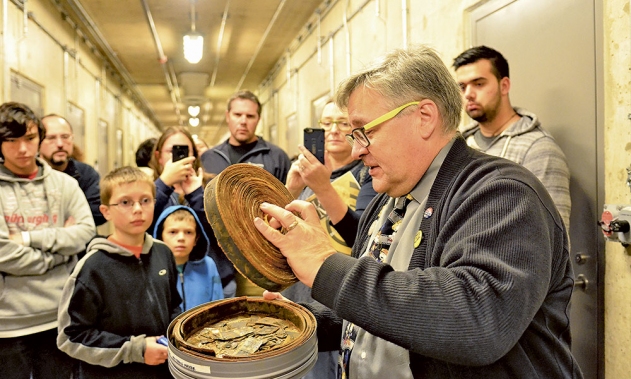 Science & Film spoke with George Willeman by phone on August 2 from his office on the Packard Campus in Virginia about his work with Morrison and nitrate.

Science & Film: Have you been surprised by the resurgence of interest in nitrate film?

George Willeman: I have worked exclusively in nitrate for 33 years. When I started at the Library, there was not a lot of outside interest. I think the current popularity of nitrate is because it is against the prevailing wind of digital. Not only is it film but it is nitrate film–most places can’t even show it–so there is this kind of sexy aura around it now. I’ll say for myself that last year was the first time that I went to the Nitrate Picture Show and I introduced a couple of the Library’s films and told everyone, “I’m finally able to rid myself of my secret shame of having worked with nitrate for over 30 years and never seen it projected.” For me, it was a revelation. I’ve heard all the stories about it glowing on the screen. My takeaway is that black and white nitrate does glow on the screen; it’s beautiful. Color nitrate looks good. But, I’ve seen color safety film in Technicolor from the 1950s that looks just as good. So I don’t know that the difference is as wide-ranging with color as with black and white. But for me, there is a definite difference between black and white nitrate and black and white safety.

S&F: If you had never seen nitrate projected, then how do you see the films that the Library collects?

GW: A lot of times, all we can do is roll through the prints on an inspection table with a pair of rewinds and a magnifying glass. We have a specially tooled machine that if the film is in good enough condition we can actually look at a bit of it. But it’s not the same as seeing it projected–the light is deliberately not very good. Mostly what we’ll do is if we can discern what the film is then it’ll go up to our laboratory to be scanned, and then we can take a look at it. 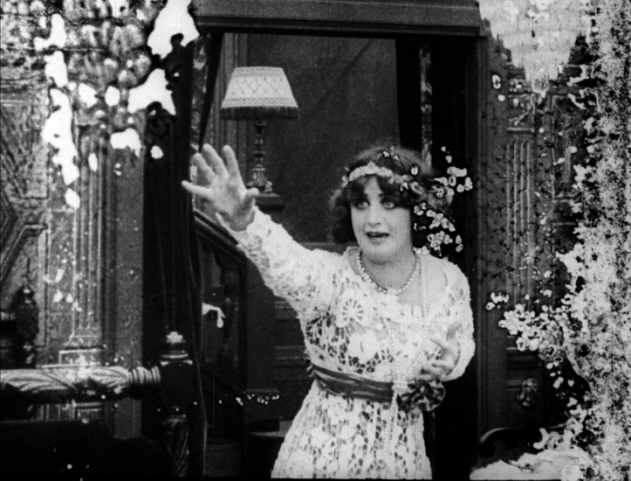 S&F: How did you start working with Bill Morrison?

GW: I like to tell people who like Bill’s work that I help him find all his stuff; and if they don’t, then I’m his enabler. I met him at one of the early Orphan Film Symposiums and we hit it off. He is interested in nitrate film that is deteriorating, and I’ve got my hands on that all the time. One time the Library got a print of the film THE BELLS [directed by James Young in 1926] from a collector and all seven or eight reels of the film were completely melted. We couldn’t use it, so I asked if I could offer it up to Bill and the Library agreed. Bill just fell in love with it because it’s so wild looking. He made THE MESMERIST and LIGHT IS CALLING from this particular print which are amazing shorts. So after that he said to keep him posted. Every time I would find something really interesting I would set it aside and let him know. Actually, I have a space in one of our vaults marked “Bill Morrison films.”

S&F: Did Morrison use the Dawson City films from the Library’s collection for DAWSON CITY: FROZEN TIME?

GW: He came down and looked at a lot of the films from the Dawson City find that we have. We have prints and negatives of everything. We also have a handful of the original Dawson City nitrates. I don’t think he used any original nitrates for his film because that great poster image that he used–I found it for him and when I looked at the reel that particular scene was toned a dark blue. 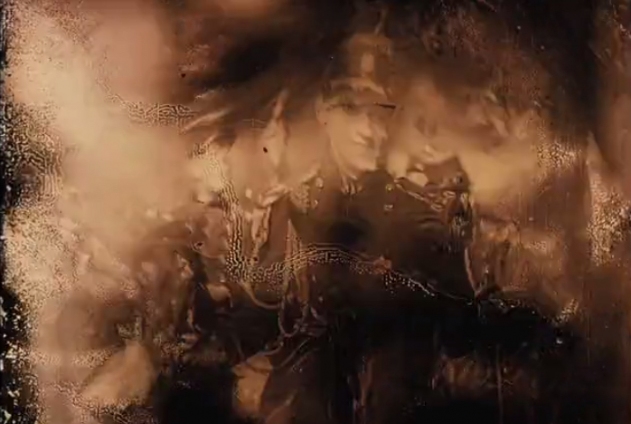 S&F: Until I started learning about film I hadn’t realized that most early films were colored.

GW: When I first started working here at the Library I had no idea. Most films had at least some color. A lot of times the low-budget producers would use tinting because it made their films look classier and it was cheap.

S&F: From what I’ve read, it seems like color was used by the director to help clarify the narrative. Such as, yellow for light and blue for night.

GW: Yellow often signifies bright sunlight. Dark blue is night. Green is used for relaxing pastoral scenes. Sepia for deserts, or interiors; or sepia for anything. One of my favorites is a yellow tint with a blue tone which turns green; that is often used for outdoor or forest scenes. A lot of times romantic scenes will be a rose-colored tint with a blue tone which is kind of purplish. It has a nice look to it. I’ve also seen sunsets on oceans done with a pink tint and blue tone.

S&F: What is the difference between tinting and toning?

GW: Tinting is when you color the base so the clear parts of the film take on a color. Toning is where they actually used a different colored metal to replace the silver in an image. Then the black part becomes blue, green, or sepia.

S&F: So film could be tinted and toned?

GW: Yes. Tinting was much more common; it was the cheaper of the two because you just ran the film through a bath and the color soaked into the film’s base. Toning was more complicated because you were actually removing the silver from the film and replacing it with another metal like selenium or uranium. Uranium came out blue.

S&F: And was quite radioactive, I assume.

GW: No, somehow it wasn’t. It must have been because there was such a thin layer. No one ever seems to be very concerned about that. 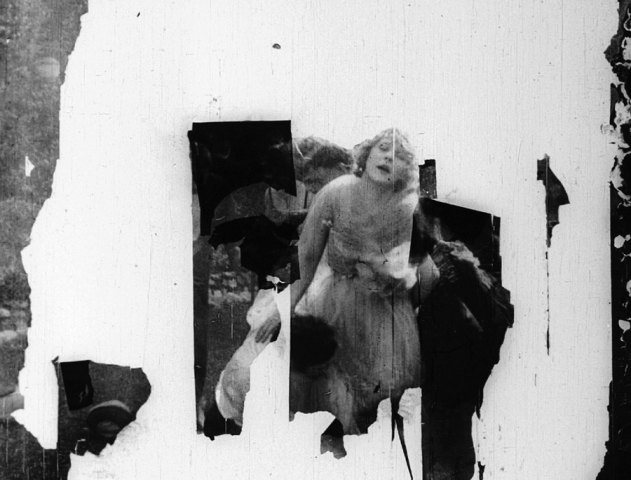 S&F: One of my favorite things I learned from talking with Bill Morrison was the term “Dawson Flutter.” Could you explain what that means?

GW: Because the Dawson City films were frozen, when they were brought up out of the permafrost they thawed too quickly and got wet. Wherever the film was sticking to itself the water removed the emulsion. The emulsion runs off completely, separates, and just leaves a blank space so that’s what he was referring to–these white lines that appear every frame or so. The image has literally been washed away. Emulsion on film is water-soluble so if it gets wet enough it’ll just float away or it’ll run. Bill really loves it when the emulsion runs because then faces get distorted.

S&F: Since a large part of the Library’s collection is original film prints, how do you feel about digital?

GW: It took me a while to really get into digital, but a colleague and I have been working on a DVD set for Kino Lorber of female silent film directors, which is going to be amazing. Kino Lorber has been doing 2K scans of some of these films.

S&F: Which directors are you focusing on?

GW: We’re working on a lot of Lois Weber films. People are going to freak when they see these because one of her big film, WHERE ARE MY CHILDREN?, is being digitized from maybe the only surviving original nitrate print and it is incredible. I can’t believe how good it looks. You can see the threads in everybody’s clothing. The shading is beautiful and you can see the original tinting and toning.

We are also focusing on Alice Guy-Blaché, and some lesser-known directors like Grace Cunard, Elsie Jane Wilson, and Ida May Park. Their films are all delightful and they are quite impressive. We discovered that a major films of Lois Weber’s called HYPOCRITES, which has been distributed and shown for years–we discovered that the reels were in the wrong order and have been for 45 years. We rearranged them and now it makes total sense.

The Museum of the Moving Image will be showing Bill Morrison’s new film DAWSON CITY: FROZEN TIME from August 18 to 20. On August 20, two additional films by Morrison–BEYOND ZERO and JUST ANCIENT LOOPS will be shown. Morrison will be at the Museum for a discussion. For more, read Science & Film’s interview with Morrison, and a breakdown of the George Eastman Museum’s annual Nitrate Picture Show.