A hippopotamus-sized, roly-poly, genetically modified pig stars in Bong-Joon Ho’s new film OKJA. With genes altered by a company called Mirando, the pig was bred to be a sustainable source of food for the increased human population.

Currently, pigs are a significant research animal. Scientists are interested in studying pig genomes because pigs are an important food source worldwide, and they are used in laboratories to model human diseases in the hopes of finding effective treatments. Their organs are also similar in size to human organs and so could be harvested for transplants. A paper detailing advances in tools to alter pig genomes was published by a group of Chinese researchers in the online journal Developmental Biology and Stem Cells in June of 2017. The study used a breed called the Bama miniature pig. The researchers studied a group of these pigs in order to identify mutant genes which code for physical traits similar to those found in humans, such as body weight, to show the effectiveness of this new tool to create mutations.

The Bama pig is a domesticated species indigenous to China. These pigs have been inbred with genetic alterations to make them small–about 30 pounds–and used by researchers for years as models for human diseases. In 2015, they came onto the market as pets. (In OKJA, the Mirando-bred pig Okja has a best friend: the girl who helped to raise it.)

Monsanto was one of the first companies to genetically modify plants for human consumption. In OKJA, Mirando plays a similar role–spearheading the genetically modified meat industry. As Lucy Mirando (Tilda Swinton) says, “I took nature and science and I synthesized. And everyone loved it. You remember what The New York Times said about our super pigs? Lucy Mirando is pulling off the impossible. She is making us fall in love with a creature that we are already looking forward to eating. I mean, these are journalists who never write about pigs. They never write about pigs. They wrote about our pigs. Ten years in planning, on the cusp of a product launch that will feed millions and what happens?” 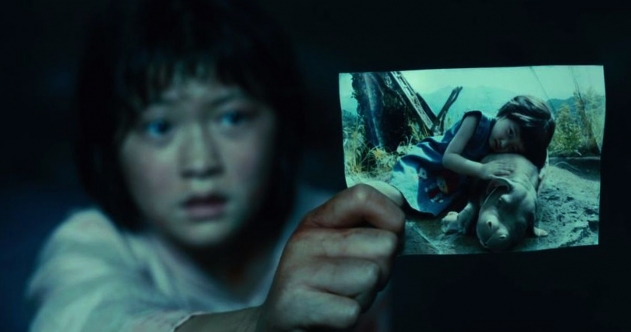 OKJA, written and directed by Bong-Joon Ho, is now available to stream on Netflix. It stars Tilda Swinton, Jake Gyllenhaal, Paul Dano, and Ahn Seo-Hyun. For a review of the film, see Elbert Ventura’s piece on Reverse Shot. For an interview with writer Jon Ronson, listen to the New Yorker Radio Hour podcast.