In Steven Spielberg’s 2002 thriller MINORITY REPORT, a trio of people–Precogs–have previsions of the future. A PreCrime team arrests people on the basis of murders the Precogs have seen, thereby changing the future. Jonathan Schooler is a brain researcher and professor at UC Santa Barbara in their department of Psychological & Brain Sciences; one of the subjects he studies is precognition, which is an example of anomalous cognition.

MINORITY REPORT, based on a Philip K. Dick short story, will be projected in 35mm on June 18 and July 8 as part of the Museum of the Moving Image’s series of films directed by Spielberg. The film stars Tom Cruise, Samantha Morton, and Colin Farrell. Science & Film spoke by phone with Dr. Schooler before the screening.

Science & Film: What is precognition?

Jonathan Schooler: Precognition is any phenomena where a person is able to predict the future in ways that standard mechanisms would not allow. MINORITY REPORT certainly fits. Probably the most widely cited paper in the field is by Daryl Bem; it reports 11 studies that look at different examples of precognition. In one study, researchers have people choosing between doors, and one door leads to an arousing picture and one does not. There was a statistically significant finding that people favored the door that was going to have the arousing picture behind it. In another study, people were better able to learn lists of words that they were going to study in the future; people are getting a cognitive advantage from an opportunity that hasn’t happened yet. Another finding is that people show some kind of EEG response, so a brainwave change, prior to an arousing image. 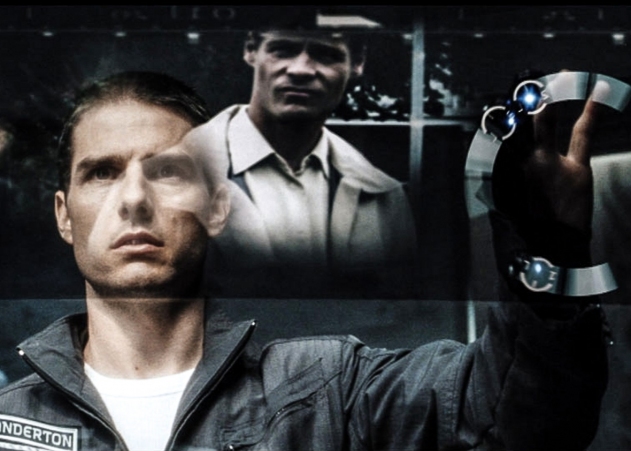 S&F: In MINORITY REPORT, Precogs are aided by technology. Is there anything special about the people tested in these the studies?

JS: They are normal individuals, although Daryl Bem has reported that individuals with meditative experience show larger effect.

S&F: How do you study precognition?

JS: We have done studies that have looked at presentience. You flash either a light or a loud sound and then you look at brainwaves prior to the event, and there is a different pattern of EEG for light versus sound. We had another paradigm where we presented images very briefly, and sometimes the images were going to be presented again in the future. The question was, does the fact that someone is going to see the picture in the future influence his or her perception of it when it is flashed the first time?

JS: In that case, we found a number of suggestive findings but then had difficulty replicating them. I have been involved in precognitive research for some time and the data has been oddly always somewhat equivocal in that I was never prepared to say that it was there or wasn’t there. But I’ve always been the person who says we should study it. That is a controversial take.

S&F: Were these findings replicable, what do you think they would represent?

JS: It would be absolutely fascinating if it were the case that any kind of anomalous cognition exists, because it would suggest capacities of consciousness that have been speculated throughout history but have not been compellingly demonstrated to the satisfaction of mainstream science to date.

Alternatively, if these effects are not real, the fact that there have been so many reports of them would show the capacity for scientific error at a level that has not been fully documented. So, either way, if it is a real phenomenon or if it is a lot of wishful thinking, my opinion is that it’s important to get to the bottom of it.

S&F: The Precogs in MINORITY REPORT only see pre-meditated murders. To paraphrase from the film, this is because when someone dies it is a rending in the metaphysics of space and time. I wonder if physics plays into this at all?

JS: In a number of Daryl Bem’s studies, he relied on emotional material. There has been speculation that emotion may be a particularly important quality that we may be able to access from the future. That’s a speculation, but that is why Bem designed the studies the way he did. Although there is some controversy on this, the other point is that all the formulas of physics operate forwards and backwards, and explaining why time only goes in one direction has proven to be quite challenging for physicists. They have a sort of explanation in terms of entropy, but it is not really the rule-based principal that would seem to necessarily prevent the possibility of retro-causation. In fact, one of the people I am collaborating with is a physicist who believes that precognition is not necessarily antithetical to what is currently known about what is possible in physics.

S&F: What happens when people think that they have no control over the future? In other words, that it has been predetermined. How does that affect their behavior?

S&F: Abstracting that is a little like what psychotherapy is in some ways, in that you’re learning about your patterns of behavior with the hope that you can then change that behavior.

MINORITY REPORT, starring Samantha Morton as a Precog and Tom Cruise as Chief of PreCrime, will play at Museum of the Moving Image on June 18 and July 8.