Three of Booker Prize-winning novelist Margaret Atwood’s books are being adapted for the screen. Alias Grace will become a miniseries on Netflix, The Handmaiden’s Tale will become a series on HULU, and HBO is in development with a series based on her most scientifically grounded books. The books are a trilogy called the MaddAddam series—they are Oryx and Crake, The Year of the Flood, and MaddAddam. Science Friday host Ira Flatow interviewed Atwood on the science behind Oryx and Crake. 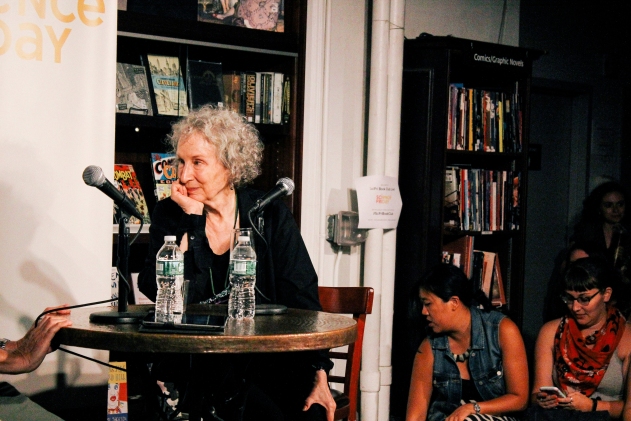 Oryx and Crake is in a future world populated by one lone human and a small tribe of genetically-engineered “Crakers,” who can better survive the weather, disease, and lack a competitive drive. The geneticists who engineered the Crakers also conducted experiments on animals which resulted in some weird recombinations. A number of these recombinants have been created by geneticists via gene splicing.

Atwood mentions a luminous green rabbit. The French geneticist Louis-Marie Houdebine spliced into a rabbit’s DNA in a gene called GFP (green fluorescent protein) found in jellyfish which made the rabbit glow green when under blue light. He created a transgenic animal. Beginning in 2013, artist Lynn Hershman Leeson made an interactive installation called The Infinity Engine, one part of which highlights another transgenic animal. Leeson’s exhibition displayed an image of a cat which glowed green–a result of the same GFP protein–engineered for AIDS research by the Mayo Clinic in 2011. Since 2003 when Atwood wrote Oryx and Crake, a new technology called CRISPR-Cas 9 has made targeting specific genes much easier allowing scientists to activate or silence individual genes with precision. Hence, Atwood has said that she doesn’t consider herself a science fiction writer per se. She told Ira Flatow, “some people make a division between science fiction which is the Flash Gordon, other planet, STAR TREK, STAR WARS kind of thing, and speculative fiction which is more your 1984 could happen here, type of fiction. I write the later kind.”

Over ten years later, Ira Flatow sat down again with Margaret Atwood. Their talk, which was taped live at Housing Works Bookstore in New York, is available to stream below.