Computers: From Human to Handheld By Sonia Shechet Epstein | October 20, 2016

A computer was once a person who could perform calculations, and a computer lab was where such a person worked. Hidden Figures, by Margot Lee Shetterly, is about the true story of human computers. Shetterly’s book focuses on the African-American female computers who worked at NASA’s Langley Research Center in the 1950s, computing trajectories for the first astronauts who orbited the earth. Ted Melfi’s film adaptation stars Octavia Spencer, Janelle Monáe, and Taraji P. Henson, and will have an Oscar-qualifying release in December of 2016.

In the United States, the history of human computers–individuals who could fill a job which required arithmetic–begins in the military and centers on women. In the 1800s, the U.S. Navy’s Nautical Almanac Office produced a publication to aid ship captains in navigating via the stars. The Office was staffed with mathematicians including the astronomer Maria Mitchell, who was the first female astronomer. The next large-scale call to arms for computers came at the start of the First World War. Human computers were needed to calculate, “map grids, surveying aids, navigation tables and artillery tables. With the men at war, most of these new computers were women and many were college educated,” said Dr. David Alan Grier in a speech given at the Philosophical Society of Washington. Towards the end of the War, in 1917, the National Advisory Committee for Aeronautics (NACA) established the Langley Research Center in Hampton, Virginia to conduct aeronautical research and study aircraft and space flights.

During the Second World War, between 1935 and 1942, women and men were hired as human computers by NACA with women making up the majority of the work force while men were in the Army. According to NASA, four women mathematicians were hired by NACA in 1935 and together were termed a “Computer Pool.” (NACA became NASA in 1958.) Katharine Armistead worked as a computer at the Langley Research Center until the mid-1950s, and told historian Richard Hallion, as cited in his book On the Frontier, that “though equipment changed over the years and most computers eventually found themselves programming and operating electronic computers, as well as doing other data processing tasks, being a computer initially meant long hours with a slide rule, hunched over illuminated light boxes measuring line traces from grainy and obscure strips of oscillograph film.” The four African American women at the center of Hidden Figures were hired by Langley beginning in 1943. The women are Dorothy Vaughan, Mary Jackson, Christine Darden, and Katherine Johnson. 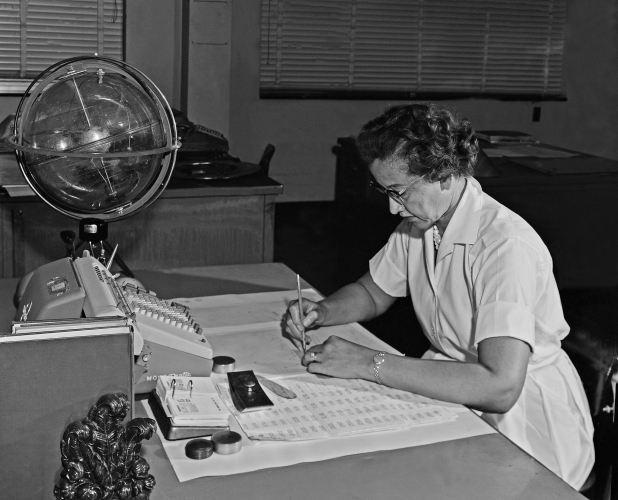 In 1937, a mathematician at Bell Laboratories built a model of a circuit which could add digits together—a large step in technology but with little immediate practical use. Human computers were still able to perform more complex calculations more efficiently. Yet, towards the end of the Second World War beginning in 1943, a system called ENIAC, the first electronic computer, was built at the Army’s Ballistic Research Laboratory. According to the Computer History Museum it was, “1,000 times faster than any previous computer. ENIAC used panel-to-panel wiring and switches for programming, occupied more than 1,000 square feet, used about 18,000 vacuum tubes and weighed 30 tons. It was believed that ENIAC had done more calculation over the ten years it was in operation than all of humanity had until that time.” Even with this incredible technological advancement, human computers continued to be employed through the 1980s. 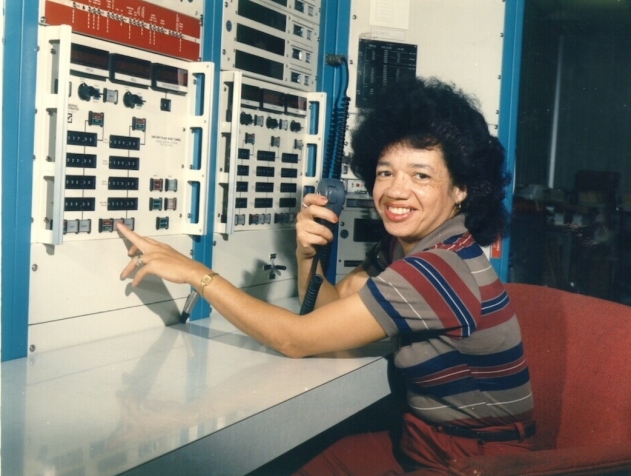 While women were themselves computers, they were concurrently responsible for programming languages for machines. In the 1950s, Grace Hopper, Lois Haibt, Ida Rhodes, and Jean Sammet were some of the key computer scientists working on the first computer languages such as COBOL and FORTRAN.

The Alfred P. Sloan Foundation supported the research and writing of Margot Lee Shetterly’s book on human computers. Hidden Figures is now available where books are sold. Sloan also has a program to support underrepresented individuals in higher education who are studying science, technology, engineering, and mathematics.