HOMO SAPIENS is a film without people. The camera steadies on abandoned buildings, which are the remnants of civilization. The sound, recorded in-studio, was stripped of all human noises. What is missing is so present that the filmmakers’ approach can be seen as an anthropological investigation into the modern world; it focuses on the infrastructure of society—transportation, cultural centers, hospitals, factories—which support human existence. This is the latest from Austrian documentarian Nikolaus Geyrhalter who directed and photographed HOMO SAPIENS. Watching the film is an experience of entering different spaces and being present for whatever small environmental changes (wind, rain) happen within the confines of the frame; the camera is still. HOMO SAPIENS is playing at Anthology Film Archives and streaming on Fandor. A review, written by Travis Crawford for Keyframe, is republished (with minor edits) with permission below: 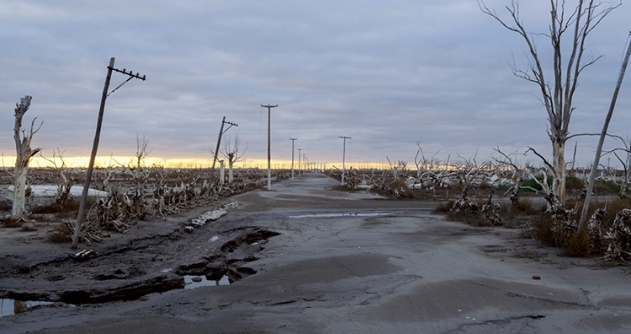 The movement has also seen its share of superstars develop—not in terms of photographers, mind you, but in terms of locations. The ghost town metropolis of Detroit is the obvious “winner” among U.S. ruin-porn sites, although it’s easily bested internationally by such devastated locales as the nuclear disaster sites of Pripyat, Ukraine and Fukushima, Japan, along with such unforgettable oddities as the deserted Buzludzha monument in Bulgaria, and the discarded mining communities of Kolmanskop, Namibia and Japan’s Hashima Island.

Feature films have been eager to embrace some of these ruin-porn locales as suitably grim backdrops for dramatic tales of alienation. The remnants of Detroit alone have been effectively utilized by Jim Jarmusch and Ryan Gosling in, respectively, ONLY LOVES LEFT ALIVE and LOST RIVER(and for that matter also by Zack Snyder in BATMAN V. SUPERMAN), but only for bargain-basement production-design purposes. However, the new Austrian documentary HOMO SAPIENSis the clearest, most direct cinematic translation of the ruins-photography wave into feature-length form to be produced to date. Yet it also deviates substantially from the clichés and criticisms that the photography movement has already generated, and in its similarities to some non-narrative experimental film work of years past, it might be less—or more—than what some viewers might expect.

Several of the aforementioned locations appear throughout HOMO SAPIENS—indeed, otherworldly images of the Buzludzha monument bookend the film, as its alien orb is drenched by rain in the opening and completely submerged by snow by the denouement—but director Nikolaus Geyrhalter adopts the sparest approach imaginable. The possibilities for goth-gloom overkill in a ruin-porn feature film are endless, and one imagines such an endeavor would be peppered with sleekly ominous LAST YEAR AT MARIENBAD-esque tracking shots through disintegrating structural remains, underscored by a Dead Can Dance and/or Brian Eno drone: a KOYAANISQATSI or BARAKAfor the nihilist set. But Geyrhalter’s simple aesthetic couldn’t be further from such obvious impulses. He’s already directed over a dozen documentaries that often display a distinct fascination with landscape (including one on Chernobyl, 1999’s PRIPYAT, which covers similar terrain), and he has the confidence to allow the locations to exert their own quiet power within the frame. 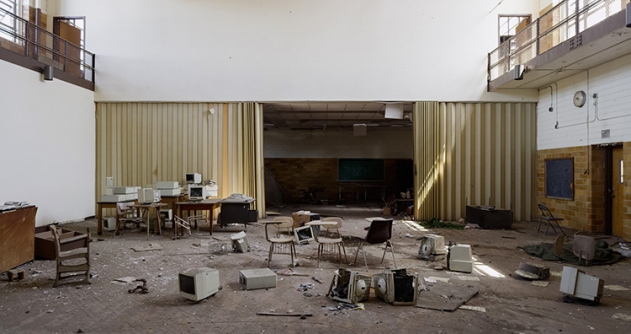 HOMO SAPIENS contains no music. It contains no camera movement. There is never any hint of mankind within the film, neither visually nor aurally. Geyrhalter’s film consists entirely of still-life portraits of abandoned structures, with each shot typically lasting fifteen to twenty seconds, some a bit shorter, some a bit longer. It’s a surprisingly science fiction-like study of a seemingly post-industrial if not technically post-apocalyptic planet abandoned by humans—the only signs of life within the locations being the sounds of buzzing insects and chirping birds, and the images of wildly overgrown vegetation and the occasional mischievous invading frog. If all of this sounds intimidatingly austere, the truth is that HOMO SAPIENS is oddly viewer-friendly, with its soundscape of thunder and rain, wind and crickets, giving the film a serene, meditative quality that casts a very seductive spell. Yet there is always an eerie, vaguely unsettling undercurrent to the film’s hypnotic appeal—if it was a music genre, it’s safe to say that the film may be Ambient but it’s never New Age. Intriguingly, one of the film’s few concessions to artifice is that its naturalistic soundscape was created entirely in post-production, as Geyrhalter originally intended to record location sound but found the presence of man-made background noise, like distant traffic, too intrusive.

Geyrhalter spent five years traveling through various countries to assemble his footage. (The exact locations aren’t mentioned in the credits, and the director has said that he could only shoot in certain places under the condition that he not be specific about their whereabouts). During that period, he completed another theatrical documentary, the three-hour-plus OVER THE YEARS (2015), chronicling the closure of an Austrian textile mill and its effect on the workers. Geyrhalter largely avoids filming any abandoned private residences in HOMO SAPIENS, as he’s more concerned with giving glimpses of the remains of once-valued social structures—of which there is a vast selection. He surveys the ruins of train stations, department stores, hospitals, office buildings, power plants, schools, airports, computer labs, churches (the most beautiful images), prisons (the creepiest), libraries (the saddest) and a Japanese McDonald’s. This last is the most surprising: Who knew a McDonald’s could be abandoned, even when, as in this case, the rest of the town has been too? 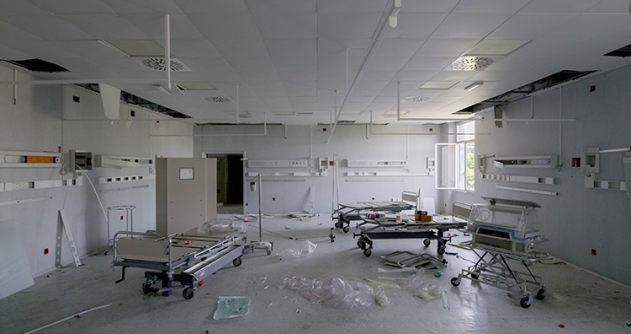 The film also devotes time to the two sorts of structures whose ruins have developed the most fervent followings: old movie theaters and shopping malls. Indeed, it’s interesting that the most melancholic, disquieting images are not of crumbling infrastructures, but of discarded places of entertainment and leisure: theme parks, playgrounds, bowling alleys, discotheques. The documentary is as much a portrait of shifts in mass amusement activities and the fleeting nature of leisure fads as it is a study of declining industries and societal neglect. There are also entire towns which have been left to rot, as well as some large, mysterious structures whose original functions are not always apparent. Geyrhalter initially withholds the precise nature of some buildings by obliquely offering more clues through a series of shots, resulting in the film’s most gasp-inducing moment, when a generic empty warehouse is suddenly revealed to be an old slaughterhouse as the shot sequence culminates with a massive pile of bones.

The absence of camera movement and the duration of the shots allow one to observe details that surely otherwise would have escaped notice: the cascading patterns of leaves being rustled by the wind, dust particles hovering through a beam of bright sunlight, rain droplets forming small puddles on fragments of tiles. […]

While there is seemingly little discernible structure to how the images of HOMO SAPIENSare presented, the film becomes more foreboding and unnerving in its final third, as it moves further and further away from even a glimmer of human life. Geyrhalter focuses more on external ruins, often aligned with beaches and the sea, ultimately moving into Herzog/FATA MORGANA territory (stylistically and literally), where the barren desert and mountain terrain often betray only the slightest hints that there ever was any human interaction with the landscape. 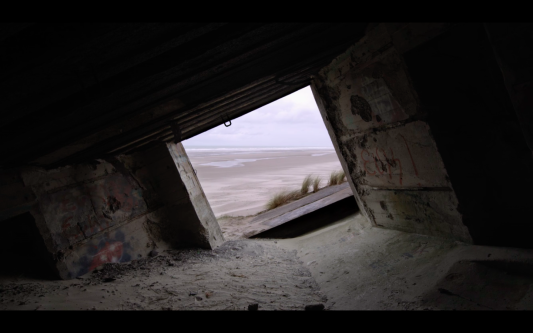 As a photography movement, ruin porn has often been accused of trivializing devastation by approaching it from a purely aesthetic perspective. Yet the images of entire towns debilitated by disasters and then forsaken convey genuine loss, while also a sense of majestic defiance. If HOMO SAPIENS is an examination of mankind’s artificial desecration of a natural landscape, then it’s also a nod to architecture having the last laugh—the film could’ve been a treatise on how humanity is “dwarfed” by its environment, but in this case, human beings are rendered so inconsequential as to be basically null and void. The film’s title is ironic (albeit open to interpretation), but HOMO SAPIENS finally emerges as a look at how mankind’s ambitions and creations become folly, reclaimed by nature in their solitude, while also enduring as unlikely testimony to a surprising new form of beauty. […]"

Travis Crawford is a contributing writer on cinema for Film Comment, Filmmaker Magazine, in addition to Keyframe. Keyframe is Fandor’s free daily digital magazine. Fandor is a subscription streaming service with over 6,000 films. HOMO SAPIENS had a theatrical run at Anthology Film Archives in New York from July 29 to August 4 and is now on Fandor.