An Inquiry Into The Phenomena of Wonder at MASS MoCA By Sonia Shechet Epstein | June 24, 2016

Promises of alternate forms of life and the cosmos have always sparked wonder—think of Richard Dreyfuss’ face in Steven Spielberg’s CLOSE ENCOUNTERS OF THE THIRD KIND. Four artists in Explode Every Day: An Inquiry into the Phenomena of Wonder, an exciting new group exhibition at MASS MoCA, were residents at the Search for Extraterrestrial Intelligence (SETI) Institute in California, which looks for extraterrestrial life. Dr. Jill Tarter is an astronomer and Chair for Research at SETI. She was the model for Jodi Foster’s character in CONTACT, directed by Robert Zemeckis and written by Carl Sagan and Ann Druyan. Tarter told Science & Film that the residency program began in 2010 when she met the New York-based multi-disciplinary artist Charles Lindsay. She wrote the introductory text for a book, Carbon, composed of his photographs.

Dr. Tarter said in the book, “Artists and scientists each have a role to play in telling our human story, and placing us in a cosmic context…. [Lindsay] is stretching the artistic practices of the twenty-first century to visualize alternate worlds. I am trying to detect other evolutionary biologies among the hundreds of billions of worlds within our own Milky Way galaxy. He has a lot to teach me.”

Lindsay became the first Artist in Residence at SETI and now heads the program. According to email correspondence between Science & Film and Dr. Tarter, the program “has been the result of Charlie's labors and [Dr. Tarter’s] cheerleading. We have no funds to support these artists, and yet they come. They stretch all of our boundaries while producing works that are not at all 'illustrative,’ but in some form or another capture the questions our scientists are trying to answer, and they help us share our curiosity about life on Earth and beyond with a larger audience than we would otherwise encounter. Last year, twelve of us each spent one month working with [artist and psychiatrist] Martin Wilner, sending daily emails containing our thoughts, and then seeing them transformed into miniature 'portraits' filling the squares of a monthly calendar, accompanied by the words we'd actually composed.” Of her favorite artist and scientist interaction, Dr. Tarter said it was, “an impromptu musical event one night last summer, in the meadow of the Allen Telescope Array, amidst our 42 telescopes; as the sun was fading from the sky, Chris Chafe (Director of Stanford's [Center for Computer Research in Music and Acoustics] CCRMA) played a duet on his electronic cello with the compressors inside the cryogenic feeds of the antennas. It blended life, technology, and the cosmos in a sublime and spine-tingling way.”

The exhibit Explode Every Day features four SETI artists in residence including Lindsay, as well as Dario Robleto, Rachel Sussman, and Jen Bervin. Lindsay, who was trained as a geologist, installed “Field Station.” This multi-part installation is influenced by an artificial habitat from the film THE MARTIAN, a mineral exploration camp, and laboratories. It also includes a video, WHAT ARE THE WHALES SAYING, which was the result of a collaboration with SETI astrophysicist Laurance Doyle who used mathematics to decode whale syntax.


Houston-based artist Dario Robleto’s sound installation features the work of Ann Druyan, widow of astronomer Carl Sagan (COSMOS), who, along with Sagan, was commissioned by NASA to be the Creative Director of the Golden Record: a recording of all human experience sent into space on the Voyager to be shared with other forms of life. Robleto’s work features one track of Druyan’s heartbeat: a woman in love. He went on to make a boxed set of seven recordings, exhibited in the show, including an 1854 recording of a human pulse, and a 1908 recording of a fetal heartbeat. 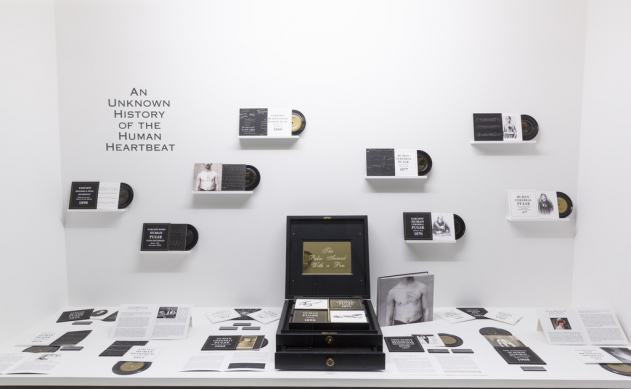 On reflection, the illusory worlds which children conceive cause wonder. The Brooklyn-based artist Nina Katchadorian’s meditative film, “The Recarcassing Ceremony,” recreates an event from when she and her brother, then nine and 12 years old, playing with a clan of plastic Playmobils witnessed two of them in a boat capsize. The siblings held a “recarcassing” ceremony for the dolls and instilled life into them. Check back on Science & Film for an article about the psychology of imaginary friends. 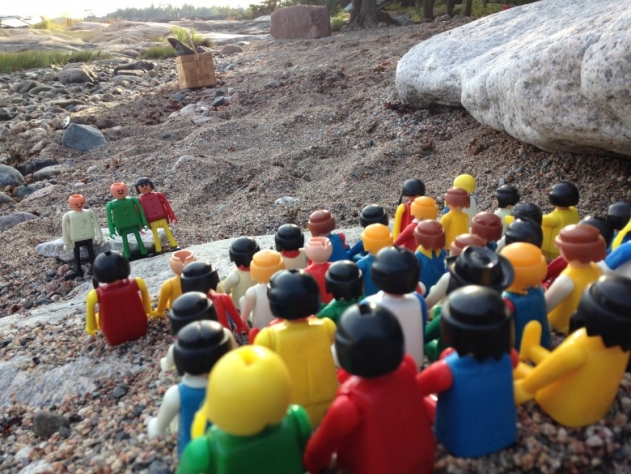 Tristan Duke, another artist in the show, works at the Museum of Jurassic Technology, a museum of slight-of-hand in Los Angeles. He experiments with holographic technology to make a three dimensional holographic image spin on top of a vinyl record. He designed the record for the STAR WARS: THE FORCE AWAKENS soundtrack, which was released on June 17.

Explode Every Day is co-organized by MASS MoCA curator Denise Markonish and artist Sean Foley. Markonish is the head of the SETI artist-in-residence advisory committee. The show includes both new and existing work by over 20 artists; it is on view now until April 2, 2017 at MASS MoCA in North Adams, Massachusetts. The catalogue, on the history of wonder, will be published by Prestel in August and includes essays by clinical psychology Kay Redfield Jamison and astronomer Jill Tarter. Tarter was a Sloan Foundation jury member at Sundance in 2014, which selected Mike Cahill’s film I ORIGINS as winner of the Feature Film Prize.