The Cost of Endless Growth
By Cosmo Bjorkenheim | August 18, 2022 This article was commissioned as part of the series Science on Screen: Extinction and Otherwise, to accompany a screening of Jessica Kingdon's ASCENSION on August 21, 2022 at Museum of the Moving Image.

It has, of course, become a platitude to say that the People’s Republic of China is Communist in name only, its economy being perhaps more accurately described as capitalism gone Super Saiyan, the pointy locks of its platinum blonde hair undulating wildly in a halo of energy waves cracking the ground beneath its feet. The economy of modern China didn’t become this wildman juggernaut overnight; for the first several decades of its existence it was largely oriented toward the export of manufactured goods, its authoritarian government considered by Western analysts an obstacle to innovation and true economic development. That changed after Deng Xiaoping and his successors gradually ushered in a system that New York Times pundit Nicholas Kristof would dub “Market-Leninism,” a unique blend of one-party rule and private enterprise that would eventually catapult the Middle Kingdom to global economic dominance.

The future of China’s economic power continues to be an endlessly fascinating subject of speculation for Western economists, and the still somewhat hermetic nature of the country’s culture still titillates Western readers and audiences. Jessica Kingdon’s ASCENSION, nominated for the Academy Award for Best Documentary earlier this year, plays into that fascination while attempting to complicate it. It can be described as a film about China’s industrial supply chain, or as a film about the Chinese dream, or as a film about the brutally efficient end product of the long period of market liberalization that has gone by the moniker “socialism with Chinese characteristics.” But what these descriptions miss is just how global the film’s scope is. ASCENSION may have been shot in mainland China, but the flows of commodities, capital, and waste it depicts encircle the planet and are a potent predictor of its impending fate.

I recently sat down with Kingdon and asked her to editorialize on some of the themes that her film subtly puts forward.

ASCENSION is surprisingly funny, riddled with jokes told mostly through sardonic editing choices. Perhaps counterintuitively, the butt of its jokes is, for the most part, not the Chinese with their workplace-loyalty mantras (“My glory is tied to that of the company!”) and individuality-crushing corporate bootcamps; it’s us Americans, who have blithely painted ourselves into a corner of irreversible reliance on cheap commodities manufactured thousands of miles away. I ask Kingdon what she hopes ASCENSION can help us realize about our economic and cultural relationship with China. “As Americans, we are one of the world’s largest consumers of goods and exporters of waste. So there’s no way we don’t factor into this equation,” she tells me. This is why ASCENSION is anything but an exoticizing portrayal of a foreign culture ideologically blind to the strangeness of its ways. Rather, it holds a fun-house mirror up to American society, showing us the grotesqueness of this short-sighted way of life we’ve drifted into. Kingdon tells me she thinks it’s important that we make more of an effort to understand just how similar the two societies are. This cultural convergence is amply demonstrated by the numbers: the two countries now have comparable retail markets of around $6 trillion, and China has caught up with the US in how many billionaires it produces. Life in the two superpowers is also now dominated by very similar consumption-oriented lifestyles: as an exuberant executive tells an expo crowd in ASCENSION, “When China’s consumption potential is fully realized, we’ll be consuming five times as much as the US.” Already, General Motors sells significantly more cars in China than in the US, and Apple sells twice as many iPhones. 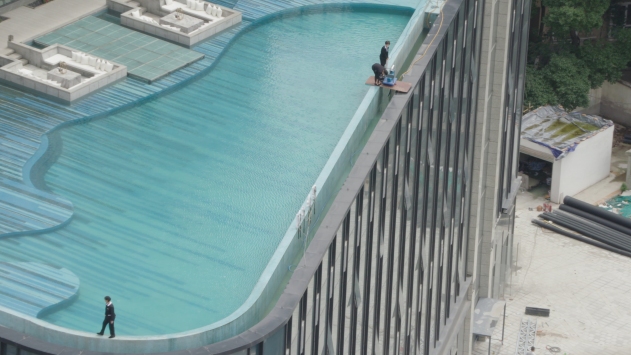 Employees working on a rooftop infinity pool in Chengdu, China, as seen in ASCENSION. Image courtesy of MTV Documentary Films.

Some jokes seen in ASCENSION are low-hanging fruit, like the newly minted entrepreneurs who spell out their economic ambitions as universal imperatives (the leader of the Star Boss branding workshop exhorting her cowering students to “monetize your personal brand — knowledge must be monetized!”). But after a while, the laughter begins to stick in our throats, as the film forces us to consider the environmental implications of this inescapable global production-consumption cycle. Early on in the film, we observe the interior of a water bottling plant. The image of these assembly lines is almost comically trite, literally like MODERN TIMES, with all-too-human workers falling behind the breakneck pace of the conveyor belts they’re stationed at. Since the plastic water bottle has become emblematic of our failure to reduce our reliance on single-use items destined to form plastic continents in our oceans, what might otherwise read as a silly sight gag turns into a powerful image of defeat.

As it turns out, garbage was originally intended to be Kingdon’s focus. She tells me, “I wanted to film in waste processing sites within China such as ‘e-waste villages’ … small, informal workshops, often family-run, where workers sort and extract materials from discarded electronics like smartphones, computers, and batteries. The materials are burned or soaked in acid, releasing toxic residue.” A notable example of such a place is the town of Guiyu, where each year tens of millions of tons of cell phones, televisions, monitors, and other kinds of e-waste are brought for processing. This is a genre of particularly stubborn waste that our civilization continues producing at an exponential rate, with little relief in sight. Kingdon: “There … are real consequences to the processing of discarded electronics.The health and environmental hazards often go ignored. As the Chinese economy grew, those kinds of labor practices moved onto other developing nations within South East Asia and Africa.” Following the US and Europe’s pattern of shunting their dirty work to the Global South, China has increasingly offshored the kind of labor-intensive, low-wage production work it was once known for — though of course not entirely. How does ASCENSION address this phenomenon? Kingdon: “I feel sending away waste to other nations is just a way of outsourcing pollution and harm. It’s a way to keep the costs incurred by a consumer-driven culture invisible. But I wanted to show the consequences via physical spaces in the film.” 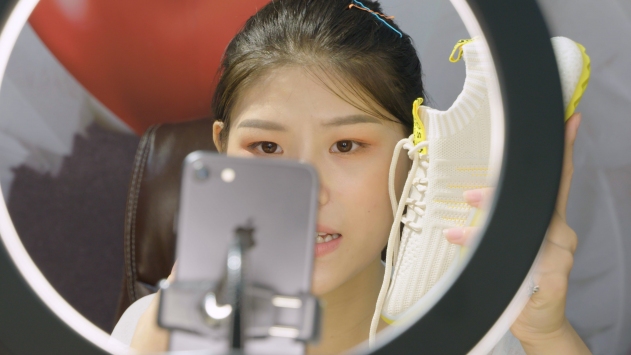 A user livestreaming to sell her product on the Chinese shopping website Taobao.com, as seen in ASCENSION. Image courtesy of MTV Documentary Films.

These spaces form the armature of what Kingdon calls the “visual language of overconsumption” that defines the film’s aesthetic. Aside from the bottle recycling plant, there are many striking instances of this. One that Kingdon singles out is the bicycle graveyard near the beginning of the film. “These bikes are produced by a rideshare startup, for whom it was cheaper to dispose of and manufacture new products rather than fixing the defective ones, adding to the cycle of increasing waste.” Another example is a rare-earth mineral mine near the end. “Rare earths are essential to produce electronics, but the byproduct of their mining produces a toxic waste residue. In this case it produced a five-mile toxic ‘lake.’ I couldn’t show the lake itself but only signs of it.”

One of the things that contributes to ASCENSION's sublime visual effect are Kingdon’s extreme long shots of landscapes molded by human beings. An obvious example of this is a handful of colossal statues, such as the 354-foot statue of the bodhisattva Guanyin in Hainan Province and the 105-foot bust of a young Mao in Hunan, the latter seeming to exist primarily as proof that Man can shape 800 tons of granite exactly to His liking. This proclivity for static takes of imposing megaprojects has its cinematic precedents; Kingdon has mentioned the influence of Nikolaus Geyrhalter’s OUR DAILY BREAD, another observational doc about the industrial production process, but there are also resonances with Geyrhalter’s more recent films HOMO SAPIENS and EARTH, two films about the planet that we humans will leave behind when we’re gone. In HOMO SAPIENS, Geyrhalter trains his camera on abandoned man-made structures—industrial sites, malls, hotels—which, in many cases, have been overtaken by wild vegetation. In EARTH, we observe humans shaping the planet’s surface in various ways—mining for copper and coal, quarrying for marble, tunneling through the Alps—leaving behind a landscape scarred by enormous machinery.

Another intertextual connection that Kingdon brings up is Frederick Wiseman. “There’s a scene from … THE STORE (1983), shot in a Dallas, Texas Neiman Marcus, that has an eerie resonance to ASCENSION. In this scene a manager is leading the female shopkeepers through an exercise training them how to smile properly for the customers”—a scene that bears a strong likeness to a sequence in ASCENSION where women are being coached on how to smile and hug correctly to advance in their corporate careers. The Wiseman comparison has been made by a number of reviewers. But Kingdon considered it a kind of sign: “When I saw that Wiseman scene and noticed the resonance I knew I was on the right track.”

We have, by some accounts, now moved on to the Anthropocene 2.0, graduating from an initial period of speculatively theorizing humans as a geological force to an era of managed extinction events and climate panic. So what is to be done? “There’s this seemingly blind drive towards endless growth and the question I am asking is, ‘To what end?’ Of course there is no easy way to simply opt out of the system. In a practical sense we need to put pressure on corporations to change their policies. As long as corporations are motivated by profit incentives they will continue to engage in harmful industrial practices. Corporations won’t change unless they have to. That’s where government regulations come in.”

Making a documentary about an economic system with a seemingly endless capacity to generate waste doesn’t obligate anyone to have an opinion about how our civilization might extract itself from this cycle, but I was tempted to ask: what’s the way out? “In the larger meta sense, I personally believe it takes a consciousness shift in our expectations of how contemporary life is lived. We need to slow down and stop living at the pace we believe is necessary to survive in today’s world. I am part of this system, as I’m steeped in it as much as anyone else is. … Our lives are seemingly more convenient than ever. But what is the cost of convenience? And what good is convenience if it’s just a race to the end?”