[Editor’s Note: This article is part of “Peer Review,” an ongoing series in which we commission research scientists to write about topics in current film or television. Steven Soderbergh’s thriller CONTAGION is set during the outbreak of a deadly virus, and follows the containment attempts of the Center for Disease Control and the World Health Organization. We asked virology researcher Dr. Robert F. Garry, Professor of Microbiology and Immunology and Associate Dean for the Graduate Program in Biomedical Sciences at Tulane Medical School, to write about CONTAGION in the context of the current pandemic caused by SARS-CoV-2. Please note that SARS-CoV-2 is the viral cause of the disease, and COVID-19 is the disease.]

Steven Soderbergh’s 2011 film CONTAGION depicts a pandemic of a fictitious virus that rapidly spreads worldwide, ultimately killing tens of millions of people. At this writing, in real life, a novel coronavirus—named Severe Acute Respiratory Syndrome Coronavirus-2 [SARS-CoV-2]—has infected nearly 200,000 people in 135 countries and caused over 7,000 deaths. The official case numbers of coronavirus disease in 2019 [COVID-19] are likely underestimates because of limited reporting of mild and asymptomatic cases. There are currently neither vaccines nor specific treatments for COVID-19. COVID-19 is rapidly transforming every aspect of our daily lives. The end of the pandemic is not in sight. CONTAGION’s often melodramatic depiction of such a pandemic has skyrocketed to the top tier of movie rental charts. Here, I review some striking similarities and important differences between the imagined scenario in CONTAGION and the real-life pandemic playing out today.

The fictitious meningoencephalitis virus-1 [MEV-1] in CONTAGION is a paramyxovirus that infects the lungs and the brain causing coughs, fever, headache, seizures, brain hemorrhage, and death approximately four days after infection, often within hours of the onset of symptoms. This is extraordinarily fast, like rabies virus on steroids—in the case of real-life viruses, usually symptoms don’t onset until several days after infection. SARS-CoV-2 is the seventh member of the Coronaviridae known to infect humans. Three of these viruses, SARS CoV-1, MERS CoV, and SARS-CoV-2, can cause severe respiratory disease. Four of them—HKU1, NL63, OC43, and 229E CoV—are associated with mild respiratory symptoms. In contrast to CONTAGION's MEV-1, the period of time before a person is infected with SARS-CoV-2 and develops symptoms averages five to six days, and can lead to hospitalization for weeks. The claim that any virus could kill as fast as MEV-1 is as fictitious as CONTAGION. The virus that comes the closest is Bas-Congo virus [BASV] which was isolated from a single person, a nurse who cared for two children who died in 2009 within a few days of the onset of hemorrhagic fever symptoms in the Bas-Congo (now Kongo Centrale) region of the Democratic Republic of the Congo. BASV was likely a harmless passenger coincidentally infecting the nurse. The actual cause of the childrens’ deaths and the nurse’s illness appears instead to have been Salmonella, which was isolated from epidemiologically-linked cases. 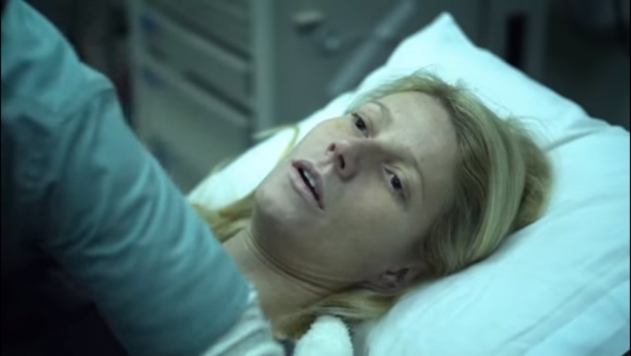 In many cases, the virus SARS-CoV-2 has been transmitted prior to the appearance of symptoms. CONTAGION takes this troubling feature, which is also true of the influenza virus, to the extreme; MEV-1 is transferred by touching objects that contain the virus, deposited by an infected person. On the day that the index case (also means first case) Beth Emhoff (Gwyneth Paltrow) is infected, she visits a casino where she blows on dice, has a drink at a bar, pays for the drink with a credit card, and touches a bowl of nuts. These objects become “fomites” contaminated with MEV-1 that infect others—in slow motion, to great dramatic effect. (The common cold virus is also transmitted by fomites and can cause symptoms and become transmissible in a few days.) To the extent that MEV-1 and SARS-CoV-2 are similar, Beth should not have able to transmit MEV-1 on the same day she becomes infected—viruses usually have a latency period during which the virus amplifies, spreading to sites in the body where it can be transmitted. In contrast to MEV-1, fomites are not the major route of SARS-CoV-2 transmission, according to the Centers for Disease Prevention and Control (CDC). Rather, SARS-CoV-2 is a respiratory virus that is transmitted mainly by droplets in the air. Thus, in CONTAGION when CDC Director Dr. Ellis Cheever (Laurence Fishburne) says “right now our best defense has been social distancing,” this statement is eerily similar to the best advice about stopping transmission of SARS-CoV-2.

In one didactic scene, Dr. Erin Mears (Kate Winslet), an epidemiologist, discusses the reproductive rate or "R0" (pronounced R-naught) of MEV-1. R0 is roughly the average number of people infected by one sick person. The concept is useful, but less important than when and how the virus is spread. One of the most striking similarities between MEV-1 and SARS-CoV-2 is that both are chimeric viruses, partly derived from bat viruses. Bats harbor many viruses, including rabies virus, that if transmitted to humans can be deadly. CONTAGION reveals that MEV-1 is a combination of a virus whose natural host is a fruit bat and a virus in a domestic pig. MEV-1 originates when a man driving a bulldozer for Beth’s company disturbs some nesting bats. One of the bats stops to eat a banana. The bat then dropped a chunk of the banana into a pig pen. A pig that was already infected with another virus eats the chunk of banana contaminated with the bat virus. The two virus genomes recombine, creating MEV-1. The pig, now carrying MEV-1, is sold to a casino where the chefs butcher it. The chef then shakes hands with Beth, infecting her with MEV-1. When Dr. Mears remarks that the virus has mutated and that the R0 has doubled, it is important to remember that mutations always happen as viruses spread through a population. For example, a single mutation in the surface glycoprotein of Ebola virus appears to have increased the affinity of the virus for human cells.

MEV-1 kills over 20% of those infected, well beyond the estimated death rate caused by COVID-19. However, there are a number of real-life viruses that kill more of the people they infect; rabies virus kills nearly 100% of those infected. There has been a lot of confusion about case fatality rates (CFR) for COVID-19. To be categorized as a case, you need to have symptoms AND you need to get counted as a case, usually by being tested or presenting at a health facility.

A different way to think about the lethality of a virus is deaths per infection. There are usually a lot more infections than cases. With SARS-CoV-2, it is thought that there are mild or inapparent infections (~75-80% is the current estimate) that never get counted as a case. Thus, the WHO estimates a CFR of COVID-19 of approximately 3%, which is technically correct. However, deaths per infection of SARS-Cov-2 is approximately 0.5% overall. An important fact is that not all age groups have the same CFR. People over the age of 70 with compromising conditions (often cardiac, diabetes, or pulmonary) are at very high risk of death from COVID-19. 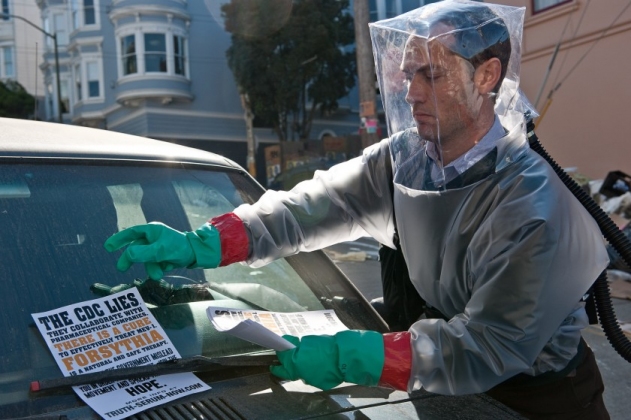 In CONTAGION, Alan Krumwiede (Jude Law) is a fervent anti-vaccine campaigner selling a worthless “cure.” In real life, there are Krumwiede doppelgangers proliferating on the Internet. Some of the most prominent Internet hoaxes surrounding SARS-Cov-2 have been conspiracy theories suggesting that the virus is an engineered bioweapon. The proposed sources of the “engineered virus” always closely align with political leanings of the accusing website. CONTAGION's CDC director Ellis Cheever (Fishbourne) has a classic quote: “No one has to weaponize the bird flu. The birds are doing that.” Similarly, SARS-CoV-2 is clearly a product of a natural process.

Misinformation is not contained to the Internet. Erroneous information about SARS-CoV-2 comes from many quarters, including some “experts” on television. One such statement is that SARS-CoV-2 survives on surfaces for only one to three minutes, which was followed by a plea for everyone with cold symptoms to go in for testing. Both statements had to be walked back quickly. SARS-CoV-2 can survive on some surfaces for days, and sending everyone with cold-like symptoms to be tested would quickly overwhelm health care facilities, needlessly expose healthy people to actual cases, and deplete COVID-19 tests that are still in very short supply. Emphasizing handwashing as a panacea to prevent COVID-19 has thankfully given way to regulations for social distancing. If social distancing had been given the same weight as handwashing and implemented earlier, this could potentially have blunted the spread of SARS-CoV-2. 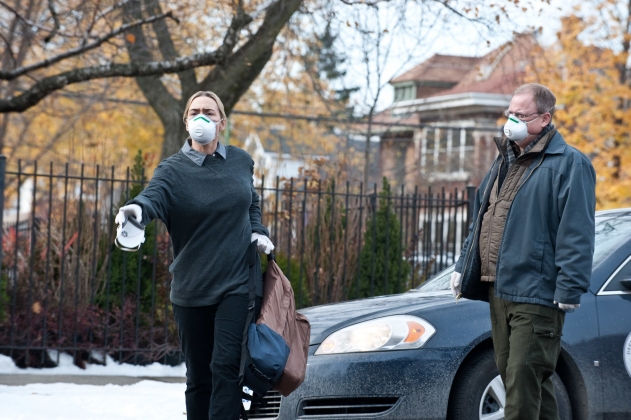 Could the unfolding pandemic of SARS-CoV-2 ultimately cause tens of millions of deaths, as depicted in CONTAGION? This is definitely the worst-case scenario, but it is possible. The 1918-19 influenza pandemic killed an estimated 50 million people worldwide (approximately 675,000 in the United States) at a time when the planet had fewer than 1.5 billion people. The relevant calculation to understand this fact is the penetration of the virus. It is thought that the penetration of the 1918-19 influenza was as high as 33% of the population. Now, the worldwide population is five times higher. There are also ten times as many people over 65 years old, and 30 times as many over 85 years old. These groups have proven especially likely to become critically ill and die in the current COVID-19 pandemic. Stopping the SARS-CoV-2 pandemic will depend on how successful the world’s population is at limiting its penetration, principally by implementing social distancing and improving access to diagnostic testing.

CONTAGION focuses primarily on first responders and scientists. The politics and social complications of the disease depicted are likely to be consequences of a worst-case scenario with SARS-CoV-2 (high R0, high CFR, high penetration). The selflessness of healthcare workers in CONTAGION has been mirrored in real life during the Ebola outbreak in West Africa, and is being reproduced in the COVID-19 pandemic. Healthcare workers are disproportionally infected in epidemics and pandemics. Too many selflessly pay the ultimate sacrifice caring for victims.

CONTAGION's MEV-1 pandemic ends when a CDC scientist develops a vaccine. If only the process of vaccine development as portrayed in the film were that easy. The lesson of CONTAGION is that we need to be better prepared. We weren’t prepared for SARS-CoV-2, but perhaps next time we will have invested in a national stockpile of personal protective equipment to protect healthcare workers, and a more robust infrastructure to rapidly develop diagnostics, drugs, and vaccines.