[Editor’s Note: This article is part of “Peer Review,” an ongoing series in which we commission research scientists to write about topics in current film or television. The Netflix anthology series BLACK MIRROR, created and written by Charlie Brooker, explores how technology could impact human relationships. Episode 2 of the latest season, "Smithereens" stars Andrew Scott as a rideshare driver who blames a social media company called Smithereen for recent events in his life. We asked social psychologist Rosanna Guadagno, Director for the Information Warfare Working Group at the Center for International Security and Cooperation at Stanford University, to write about the episode. Her forthcoming book is entitled Psychological Processes in Social Media: Why We Click.]

Technology, like so many other things in life, is a double-edged sword. Depending on how people use it, it can be a positive influence on people’s lives by connecting them with others in unique and worthwhile ways. Or, it can be a negative influence that exposes people to widespread abuse from Internet trolls, that promotes the adoption of false beliefs through disinformation campaigns, and causes feelings of loneliness and isolation as people find themselves failing to live up to the perfect, curated lives that others present on their social media profiles. Research has demonstrated that these outcomes all occur. Research has also emphasized how software itself reinforces certain human social behaviors as a function of design decisions that prioritize engaging people’s time and attention as a means to gather then sell aggregate data on user’s beliefs and behaviors. This data facilitates the targeting of ads. Nowhere is this truer than in today’s world with our ubiquitous smart phones and social media accounts, both of which have been shown to be highly addictive. The Netflix series BLACK MIRROR’s episode entitled “Smithereens” highlights these issues while telling the story of one man’s pain and loss as a result of addictive technologies.

The episode opens on a ridesharing driver waiting outside a fancy corporate office. He is performing guided breathing exercises. It becomes clear that this driver, Christopher “Chris” Gillhaney (Andrew Scott), is intentionally waiting outside this specific office in the hopes of picking up an employee from the corporation, Smithereen, a Facebook-esque social media application. Social media and grief are interrelated in this episode as we learn that Chris is mourning the loss of a loved one.

Chris ends up kidnapping an employee from Smithereen–Jaden (Damson Idris), an intern one week on the job. When Chris picks up Jaden, he is initially so engrossed in his phone that he doesn’t realize they aren’t going to the airport as planned. Over the course of the kidnapping and ensuing police chase, the two men bond. Chris wanted to kidnap an executive, not an innocent newbie to Smithereen, and he does not wish to harm Jaden. All Chris wants is to speak with Billy Bauer (Topher Grace), the CEO of Smithereen. Together, the two attempt to get in touch with someone at Smithereen who can reach Billy. 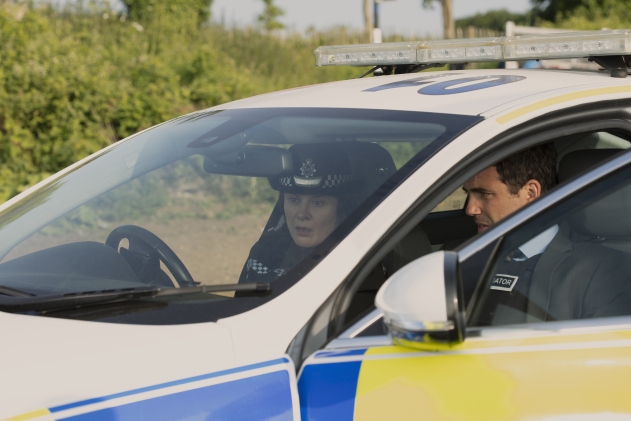 The police and Smithereen executives simultaneously attempt to learn about the kidnapper and understand his motivations. Smithereen technical wizards match Chris’s cell phone number to his social media feed to intimate details about his life. They share this information with the police. They also deploy technology that allows them to listen in on Chris and Jaden while Chris believes he is on hold with the company. This is both a violation of privacy and highlights what you can learn about someone based on surveilling their digital activities. Smithereen learns that Chris’s fiancé was a passenger in his car when they collided with a drunk driver. Chris was the sole survivor of the accident and he stopped using Smithereen shortly thereafter. The kidnapping situation escalates as Chris realizes that Smithereen has been listening to he and Jaden and that local kids are live tweeting the hostage situation.

Despite Smithereen executives attempting to prevent Billy from contacting Chris, Billy disregards their advice and calls him. During their conversation, we learn that both men are dissatisfied with Smithereen: Billy because his software has grown into something he never intended and is addictive to its users, and Chris because he blames himself for his fiancé’s death. It turns out that Chris received a Smithereen notification on his phone and in the few seconds he took to check it, he collided with the other car killing his fiancé and the other driver. Anyone (including myself) who has narrowly averted a car accident while attending to our cell phones while driving would easily empathize with Chris. Indeed, in addition to a distraction, research has shown that notifications from our phones have a negative impact on our stress levels, anxiety levels, and overall wellbeing.

As we get to know Billy Bauer, it is hard not to wonder what kind of person he is: Does he match people’s negative stereotypes of today’s technology barons—socially inept, profit-driven, and callous to humanity? It turns out that Billy has a heart, a conscience, and a sense of compassion but is surrounded by mercenary people who handle the day-to-day workings of the company and are focused on profit, regardless of the cost to humanity. Billy apologizes and explains that this was never his intention. He compares Smithereen to a crack pipe or a Las Vegas casino, and admits that Smithereen is designed to be addictive to increase “user engagement” so that people spend more time on the application.

Chris does not care about Billy’s regrets. He hears Billy admit to making the software addictive so that people can’t take their eyes off the screen, and suggests that this user feedback could be incorporated into the next update. He just wants Billy to know that he killed his fiancé because Billy’s software is addictive.

Now that he has said his piece, Chris intends to kill himself and tells Jaden to go, cutting his restraints. He apologizes to Jaden and pulls out a photo of his fiancé. Jaden tries to stop Chris from killing himself. They struggle over Chris’s gun and the police, failing to realize that Jaden is trying to save Chris’s life, shoot and kill Chris.

We don’t see the aftermath, but at least this viewer hopes that Mr. Bauer finds a way to make his social media platform about maximizing positive human connection by making people the customer, not the commodity.