The defining feature of the Transportation and Travel Pavilion at the 1964 World’s Fair in New York’s Flushing Meadows-Corona Park was a giant dome covered with an accurate relief map of the moon. The 96-foot high dome was, in fact, a theater, where fairgoers could see TO THE MOON AND BEYOND, a groundbreaking 70mm film shot in “Cinerama 360,” projected onto the dome-shaped screen. The production company behind the immersive experience was Graphic Films, founded in 1941 by former Disney animator and USC film professor Lester Novros. Based in Southern California, Graphic Films made live action and animated non-theatrical films for such industry and government clients as NASA, Lockheed, Boeing, and the US Air Force. 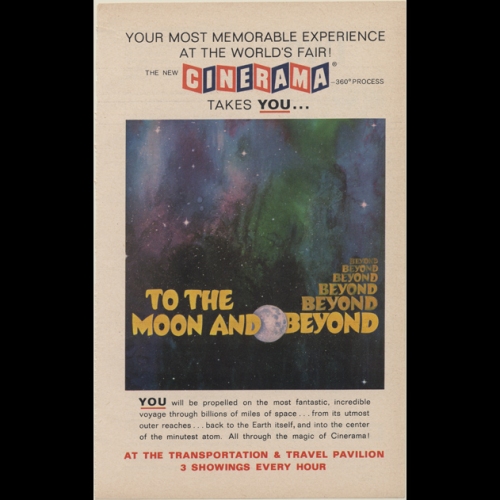 Stanley Kubrick was in the audience for a screening of TO THE MOON AND BEYOND in early summer 1965. Over the past year, Kubrick had been developing a science-fiction film project with author Arthur C. Clarke, inspired by Clarke’s short story “The Sentinel.” They’d recently changed the project’s working title from JOURNEY TO THE STARS to 2001: A SPACE ODYSSEY.

By the time he saw TO THE MOON AND BEYOND, Kubrick was already well into pre-production research for 2001. Dismissive of science fiction films to date (e.g. THINGS TO COME; FORBIDDEN PLANET; THE DAY THE EARTH STOOD STILL), Kubrick wanted 2001 to offer a more sophisticated perspective on the implications of the “space age,” and also a more scientifically-based, plausible depiction of a future where space travel was a part of everyday life. To that end, Kubrick solicited the input of those who were at the vanguard of science, technology, and design. Among them were illustrators Chesley Bonestell, Roy Carnon, and Richard McKenna; the artificial intelligence pioneer Marvin Minsky; IBM industrial designer Eliot Noyes; and effects artist Wally Gentleman, who’d worked on the documentary UNIVERSE for the National Film Board of Canada. In early 1965, Kubrick brought to the project designer Harry Lange and author/scientist Fred Ordway, who both worked for NASA and would be central to the realization of the film.

Impressed by what he saw at the World’s Fair, Kubrick added Novros’s Graphic Films to this phalanx of advisors. From mid-July to mid-August 1965, the team at Graphic Films–primarily Lester Novros, Con Pederson, who directed TO THE MOON AND BEYOND, and Douglas Trumbull, who recently joined Graphic Films as a background artist–conducted research and created concept sketches, copied the artwork on thin air-mail stationery, and sent it to Kubrick in Borehamwood, England, along with copious, detailed notes on the mechanics and physics of space travel.

The letter of agreement between Kubrick and Novros engaged Graphic Films to create storyboards for “discussed sequences which may total a maximum screen time of 30 minutes.” While the agreement does not specify which sequences they’d discussed when the two met in New York in mid-July, most of the concept art done by Graphic Films relates to a lunar base, or what would be referred to in the film as “Clavius base.”

Studies for Lunar Base, Graphic Films. 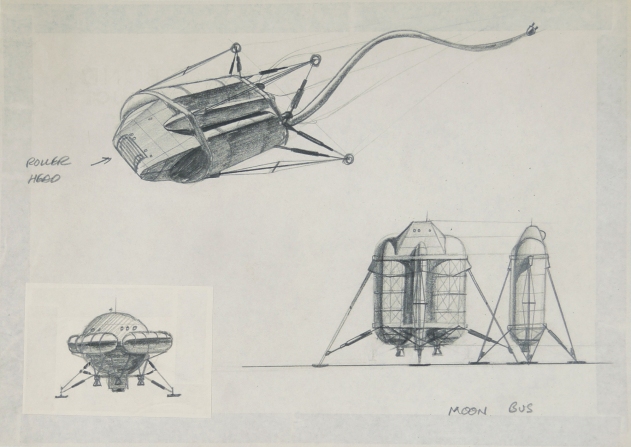 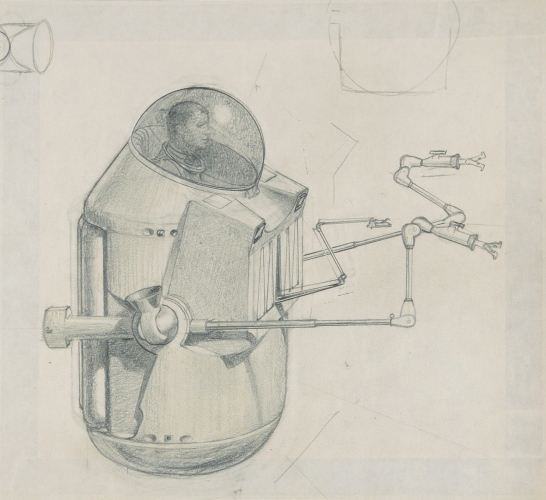 In addition to the sketches, Novros and Pederson sent wide-ranging notes on an early draft of the 2001 script. This version of the script was driven by a narrator and featured an all-knowing computer named Athena, which would soon be renamed HAL 9000. Their notes were primarily concerned with the scientific accuracy/plausibility of the narrative and the design of the film:

In Graphic Films, Kubrick had found a good match for his own notoriously rigorous research process. To learn what would realistically power the Discovery mission, Pederson reached out to several top-level scientists, and, when relating their advice to Kubrick, noted: “I realize that since this is only a movie we are not required to build a ship that works, but the most elementary facts about this type of mission should not be dismissed.” The highly technical suggestions, gleaned from the network of scientists that Graphic Films staff knew from previous projects, were very much in line with Kubrick’s zeal to create a scientifically accurate film.

“We have more film for you to look at, a couple hundred feet of 35 B&W test made by a man we often work with, John Whitney. He calls this particular technique ‘slit scanning.’ Essentially, it is a method of obtaining smooth and continuous motion variations from a single initial element... Its possibilities are limitless… We want to plan around the technique in displays such as the hologram contour-analysis (which reveals the stargate on Jupiter V).”

Douglas Trumbull, who soon left Graphic Films to work directly with Kubrick in England, would adapt this slit-scan technique and, as Pederson suggested, apply it to the mesmerizing, famed “Stargate” sequence towards the end of 2001, an effect hailed as a major breakthrough in special effects.

By early August, the challenge of the long-distance collaboration was yielding frustration on both sides of the Atlantic. Con Pederson sent Kubrick two long, technically-detailed letters on August 3 and 5. “Too bad we can’t converse readily,” Pederson wrote. “I have a lot more notes but I’ll have to wait on them.” Kubrick responded via telegram: 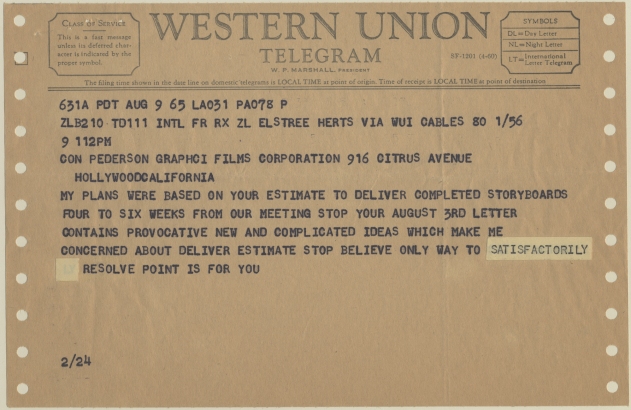 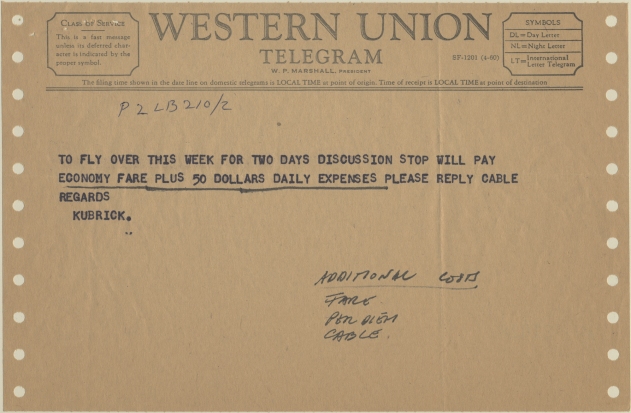 Pederson’s two-day trip to England was presumably more satisfying to Kubrick than their correspondence had been; despite a letter from Novros that tried to set their business arrangement right, both Pederson and Trumbull left Graphic Films to work directly with Kubrick on 2001 at the MGM studios in Borehamwood, each receiving “Special Photographic Effects Supervisor” credit. Their contributions to what is arguably the most renowned science fiction film ever made are well documented; lesser known is the origin of that work in the Southern California offices of Novros’s Graphic Films.

[The material featured here is a selection from artwork, correspondence, and archival material related to Lester Novros’s career that is part of the Museum of the Moving Image’s permanent collection. From March 4 - August 14, 2016, the Museum will present the exhibit “To the Moon and Beyond: Graphic Films and the Inception of 2001: A SPACE ODYSSEY” in its Amphitheater Gallery.]