This article was commissioned as part of the series Science on Screen: Extinction and Otherwise, to accompany the screenings of TAXIDERMIZE ME and HOLGUT on July 10, 2022 at Museum of the Moving Image.

HOLGUT is a documentary narrating two parallel quests in Yakutia, Siberia. One narrative features two brothers on the hunt for wild reindeer, a rare sight the past two or so decades. The parallel story focuses on the real-life Yakutian scientist Semyon Grigoriev, head of the mammoth museum in Yakutsk City. He is on the hunt for a good mammoth specimen carrying the elusive “viable cells with intact [mammoth] DNA.”

I had the honor of briefly meeting Semyon, his wife, and his children in 2018 during my trip to Siberia with geneticist George Church. We were in search of mammoth specimens and fruitful collaborations. Semyon gifted us some mammoth hair and a bone as if it were the most casual thing to do in that part of the world. Maybe it was. The news of his premature passing in 2020 of a heart attack at age 46 was a shock to many. He was a passionate mammoth hunter scientist and gained prominence in 2013 for the discovery of the well-preserved Malolyakhovskiy mammoth featuring a complete trunk and “liquid blood.” This was exciting as at that time, it indicated the carcass’s “liquid blood” might contain intact mammoth cells. Semyon’s impatient pursuit of mammoths documented in HOLGUT (Russian title MAMOHT) becomes more poignant in light of this news. Director Liesbeth De Ceulaer fully captures his dedication and commitment to the quest of finding the best frozen mammoths. 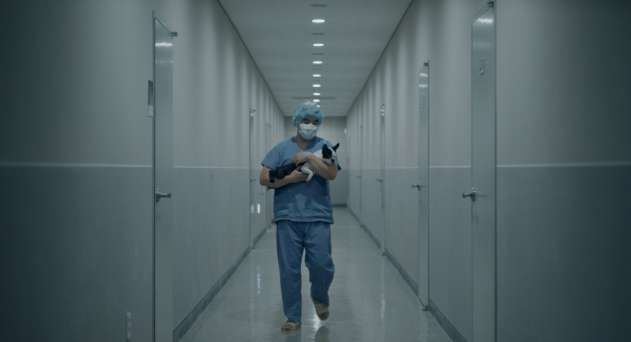 Still from HOLGUT, courtesy of the filmmaker

The documentary intertwines fiction and truth with a real cast of characters. The opening scene features scientists in scrubs handling cells of canines for the purpose of cloning them. A voice-over narrates the fictitious story of Holgut, a mammoth left behind by Noah’s Ark, who tries desperately to swim after it. Man leaves the mammoth behind, but man also tries to find it again.

The scenes in remote Siberia are beautiful and sometimes eerie. The younger brother Kyumm—who lives in the city but visits his older brother to go on the reindeer hunting trip—observes that “there’s really nothing here” at the end of the Earth. There are ducks, small fish, an occasional herd of domesticated reindeer they are not allowed to shoot, and a few local Yakutian fishermen/hunters. Camo outerwear is in abundance, however. When I was in Siberia, going on similar motorboat rides or walks through the Yakutian tundra seen in the film, I had the same thought as Kyumm: Where are the animals?

The depictions of daily life in the Arctic focused on survival are juxtaposed with Arctic scenery from the point of view of a researcher. There might not be many big animals alive, but there are plenty trapped in the permafrost layer of the land. Tusks, bones, maybe tissue, and a big dream to resurrect an animal of the distant past from the leftovers of a dead evolutionary branch. Semyon digs to find a mammoth in perfect condition. He recalls Malolyakhovkiy and bemoans how long the permit process took to ship the mammoth to labs that could clone from its well-preserved soft tissue. The dream to clone it never materialized, but he persists. He has worked on this for a long time, and he is certain he will succeed. 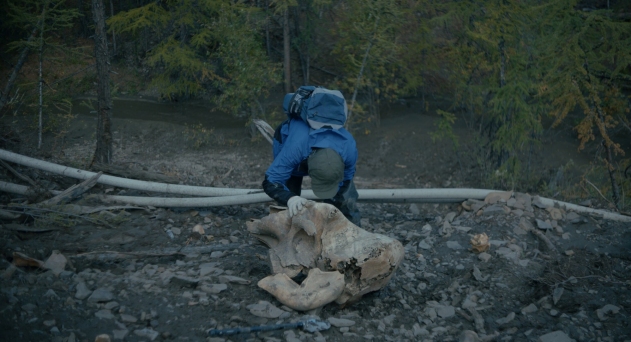 Still from HOLGUT, courtesy of the filmmaker

One can’t help but compare the futility of these two quests. The brothers find no wild reindeer to hunt despite long camping trips and boat rides. The mammoth specimen that holds the key to resurrecting this lost species is still elusive, but maybe somewhere still trapped in the thick layer of yedoma.

In scenes at the end, the brothers may or may have not found something that made their whole trip worthwhile. And Semyon’s life dream may still materialize--highly unlikely through an intact cell, but very achievable through the science of editing genomes. There is a parallel path. There is hope. Man will find Holgut.