The filmmaker Andrea Arnold’s lyrical, visceral approach to social realism has garnered her an Academy Award (Best Short Film for WASP) and no less than three Jury Prizes at Cannes for her films RED ROAD, FISH TANK, and AMERICAN HONEY. Her latest film, COW, is her first feature-length documentary, and it hews as close to her main bovine subject, Luma, as any of the human protagonists of her other movies. Shot on a dairy farm in Kent—Arnold herself grew up in Dartford—the film is a bravura feat of channeling the personal and pastoral in the industrial upbringing of a living being.

Asked at one point if she was a vegetarian, she politely demurred: “If I talk about my own experience, then it loads it in some way, but I want to say, ‘Here you are. Here's something. What do you think?’” COW opens in theaters and is available for rent online on April 8.

What went into deciding to make COW?

COWhas been a very slow, gentle project that started about nine years ago. I always wanted to make something about a farm animal. Partly it was because I had this incredibly intense relationship with nature as a kid. My mom was 16 when I was born, four kids at 22, and my dad was about two years older and never there. My mom didn't have the time to say “stay in,” so I was out roaming from really early on. Where I lived was a housing estate, but around it was a lot of wilderness. If I saw a donkey or a horse, I’d want to go and say hi, or I'd find a stray dog or cat or mouse that had been injured and bring it home. So I was always in these quiet, wild places. It wasn't really farmland. It wasn't so pretty. It was more like old pits and things that had grown over. But it was all about you being in this very sensual world and learning about how you were in relation to that world.

And then I moved to London, working in TV and stuff. It’s like we're all living now. We don't get in the rain and in the wind. You just see it from a train window. I wanted to do something to connect. We're so disconnected from the farming that happens and the animals that are used. Once upon a time I think we used to live with animals and we would have a sense of how they were and what their needs were and understand what that all meant, whereas now it's just all over there.

Was it important to you to capture the cows’ sensations of the world too? It’s beautiful when they’re romping outside.

We talk about grass-fed milk in our coffees, grass-fed this and grass-fed that. When they're born, they're kept inside for quite a long time and [as adults] spent half the year inside. When Malu, the calf, goes out, that's her first interaction with grass. So I thought, what's it like? She sticks her nose in it, she's smelling it. I love things like that. Unfortunately, the future for cows is that because they produce methane which contributes to the gases that are causing trouble, they talk about keeping them inside the whole time, rather than having less cows. When you see them outside, you see how much pleasure they get from being outside. That time when they get let out is a really special day, and they all know it. They say animals can't see the future and one of the differences between animals and humans is that they can't you know the future. But they know they're going out. 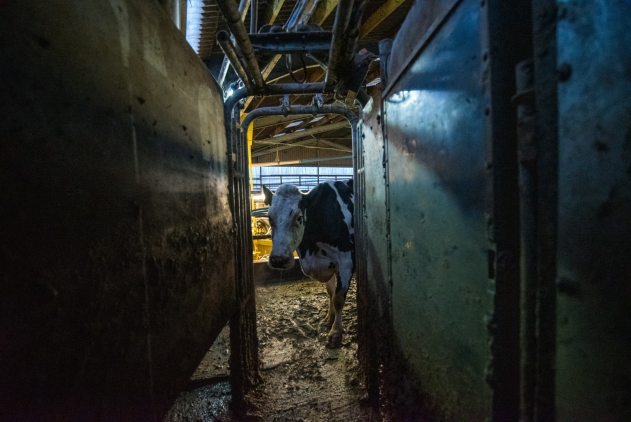 How did you try to reflect the cows’ consciousness at the level of camerawork?

I wanted to show you her spirit, her aliveness, her consciousness. We're very familiar with all the things that we use them for. But what about this invisible thing that we all have as well? Your thoughts, your feelings, your will, your desire—these other things that go on inside that are invisible. I thought, “How am I going to show the invisible?” So early on, I realized that if we put the camera on her head and on her eyes—always having her eyes in the frame—that you can imagine what she might be thinking. I mean, we can't know what a cow is thinking. We don't even know what each other are thinking! But we can imagine what they might be thinking. So my plan was just to keep the camera at her height and focus on her, and not do your regular coverage. I think in film school we get trained to cover something and get all the elements. But I'm quite bold in thinking that if you stick here, you'll know everything anyway. You can see something else is going on behind. You don't need to show everything. I think her face was everything, her eyes were everything.

Did you notice the cows expressing themselves with different moos?

When she's with her calf, she made all these little nuzzling noises [makes little grunts]. Earlier, when we were looking for a farm, I saw a calf born and get up and try to find the milk, and it was taking a while. And the mother was making all these agitated sounds [grunts]. Then after about two hours it found the udder, and honestly it was like everything in the world was good. The cow was this picture of stillness and peace and calm and beauty and connection, and the calf also was at peace. I feel like if all these things could just happen all the time, then the world would be a more calm, beautiful place. There's all this disconnect and yet this connection that I saw, to me, felt like everything. And I thought, oh, why can't that be how things are.

When you're next to them, when you're there, you can feel their breath. I really tried hard to capture that. You can feel their jaws going when they’re chewing, and you can feel all the little noises. You feel the hugeness of them. Sometimes if you just see them without hearing them, you lose something of their life-force because you can't hear the breath. You get the huge breath, and then you get how huge they are. It made a huge difference when you could hear them. I always pay a lot of attention to sound anyway. 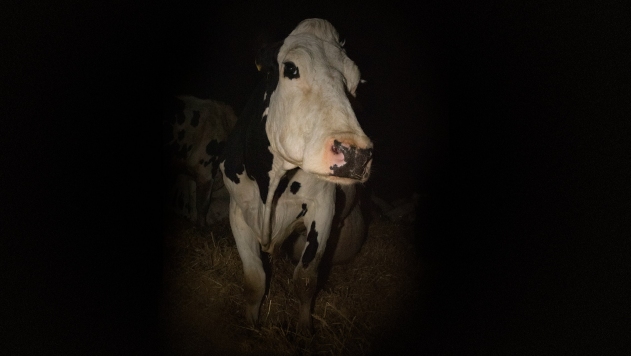 How big was your crew?

It would be different on different days. Anything between one and six. And if it was six, we'd all go to the pub. If the cow moves from left to right, and there are three or four dozen crew standing there, you catch them in the shot. I think one time I dived under a hay bale, and a calf leapt over my head. They were all being let out of a truck and they were excited.

Yeah, it's true. I'm very respectful of their size. But I never really felt any aggression—only one time with a young bull. Even if they get excited and they just want to play or chase you over the field—because they think “Woo-hoo, where are you going, let’s follow you!”—it can be scary.

Did you talk with any scientists in making the movie? How did you reconcile a biologist’s perspective, for example, with the practical day-to-day demands of farming?

I've been quite surprised by some people who've seen it and get very emotional about it. They say, “I didn't know that.” And these are people in their 50s and 60s. And I'm thinking, what did you think is going on in farms? There are so many people in this country—how do you think all this meat is getting grown and made? We all grew up with storybooks, these lovely fantasy images of farms and animals. Some of those are true. Kids are given endless animal things. Fluffy cows, storybooks with Old MacDonald. You learn to say “cow,” but it's a cute cow. I'm not saying they're not cute, but we get a weird, warped version of things.

I did at the very beginning talk with a couple of animal consciousness scientists. We had a couple come to a screening and give us some feedback. They were helpful, and they were lovely, but I realized quite early on that the science route was not the route. I was trying to make something poetic about her consciousness. I was trying to show you something as opposed to prove something. I feel like we all know that animals have sentience. How can you prove it? And it's been very convenient that we don't prove it, because of the way in which we use them. A lot of that proof gets wrapped up in legislation about how they're treated and what you're able to do and not do. But to me, it's really clear. I feel like you just have to look to your deepest intuition and you know it.

The movie ends by showing when Luma is killed after she is no longer able to give milk as she used to. Was that moment always going to be in the film?

For sure. Because it is what happens. There's a poet I like here called John O’Donoghue. He recently passed away. He talks about the wild invisible beauty, [by] which I think he means the soul, which we all have. I think it is a beautiful thing to see a being’s aliveness. But also I didn't want to shy away from some of the difficulties of her existence. I tried to be fair with everything—not to be too political or too harsh. There are some other things that could be harsher that I could show, but I tried to balance it with some reality and the beauty in her reality. And the ending is part of it. It's quick and she doesn't hardly know. In that situation, sometimes they're taken off to the slaughterhouse in a van [instead]. And they smell the van—again, they know the future. They can smell the future.

Is it true you’re making a movie called BIRDnext?

Yes. But it’s fiction. I did wonder about making CHICKEN, about a chicken. They live for 90 days and I thought, oh, that'd be really quick to do. You know, it would be a version of COW. You'd get to know the little chicken, see its quirks and its personality and its life, and then... [Makes cut-off sound]