This Sunday, April 28, at 2pm the Museum of the Moving Image's Science on Screen series presents two New York-based documentaries of the bizarre scenario that can result from people cohabiting with wild animals: MESHIE, CHILD OF A CHIMPANZEE (1932, 51 mins.) and MING OF HARLEM: TWENTY ONE STORIES IN THE AIR (2014, 71 mins.). This double feature will be followed by a conversation between MING filmmaker Phillip Warnell and pioneering animal cognition researcher Diana Reiss, Professor of Psychology in the Animal Behavior and Comparative Psychology Doctoral program at CUNY. 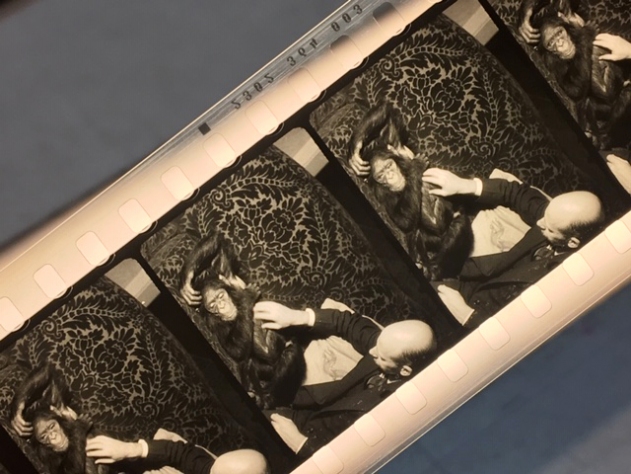 In 1931, Henry Cushier Raven, the American Museum of Natural History’s (AMNH) Curator of Human and Comparative Anatomy, returned from West Africa to his home in Long Island with a one-year-old chimpanzee named Meshie. Meshie lived with Raven's family, including his children Harry (four at the time), Jane (seven), and the newborn Mary. Meshie was known to accompany Raven to AMNH where she would eat in the cafeteria and attend lectures. Raven published writing about Meshie's behavior, and even filmed her with his kids. He and Meshie presented these films to AMNH members in 1931 and '32. The film is now part of AMNH's Library, and was preserved with support from the National Film Preservation Foundation. Science on Screen will present the restored 35mm print, the first time the film will be screened for a public audience. Raven's son Harry is now 91 and will introduce the film. (Meshie is now taxidermied and installed in the Hall of Primates at the American Museum of Natural History.)

In 2003, a 450-pound Siberian-Bengal tiger named Ming and a seven-foot alligator named Al were found to have been living over three years in an apartment in a public housing complex in Harlem, with a man named Antoine Yates. Phillip Warnell’s award-winning documentary MING OF HARLEM juxtaposes interview, observational, and reconstructed footage of Yates, Ming, and Al to create an outlandish work that regards the human-animal bond.

Tickets for Sunday's program are available online. The full conversation will be taped and made available to watch anytime.

Science on Screen is an ongoing series supported by the Coolidge Corner Theatre with major support from the Alfred P. Sloan Foundation. It is organized by the Museum's Executive Editor and Associate Curator of Science and Film Sonia Epstein.

PARTNERS
Museum of the Moving Image